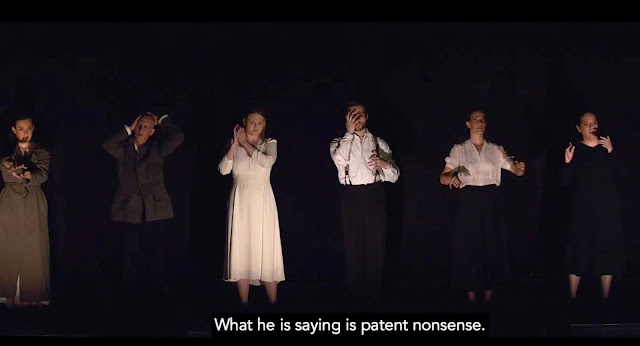 After withstanding three productions of “La Boheme,” a trio of “La Traviata”s, two versions of “Aida” and seven hours of Der Ring des Nibelungen during my quarantine-inspired opera binge, I was ready for a reset.  My viewings of “Infinite Now” and “The Ice Break” over the weekend felt like the rewarding payoff of my self-directed 18-week crash course.

“Infinite Now,” a 2017 avant-garde freakout composed by Chaya Czernowin, is a cacophonous examination of war’s horrors and contemporary anxiety.  Only the most intrepid listeners are probably capable of enduring more than five minutes of the plotless 150-minute (semi)opera.  Fully acclimated to sonic hardship, I embrace the ways in which the Opera Ballet Antwerpen production builds on the disruptive innovations of Berg, Britten and Corigliano I’ve come to admire.

Michael Tippett’s “The Ice Break” premiered in 1977, but I suspect the Birmingham Opera Company's 2015 production is the first time it made any sense.  Staged in an industrial warehouse in which the members of the audience stand and swill beer when not being pushed about by stagehands, the depiction of social unrest looks as if it could have been filmed in Portland last weekend.  It’s astonishing.

My streak won’t end tonight.  I can’t resist watching the Metropolitan Opera’s free stream of the charismatic Natalie Dessay starring in Donizetti’s “Lucia di Lammermoor.”  Rather than inviting you to join me in relishing the diva’s ghastly meltdown in the 127th opera I’ll take in in 126 consecutive days, I double-dog dare readers to instead dip into the free streams of “Infinite Now” and “The Ice Break” linked above.

(Screenshot of Opera Ballet Antwerpen’s production of “Infinite Now” by There Stands the Glass.)
Posted by Happy In Bag at 10:35 AM