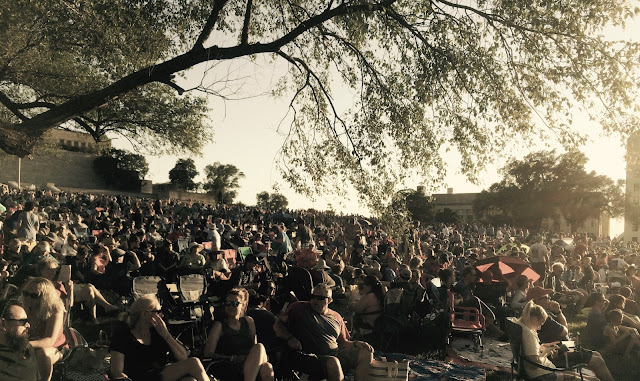 I hit the quiet storm trifecta on Sunday.  While watching Will Downing deliver the classic 1998 ballad “Stop, Look, Listen to Your Heart” at the Kansas City Jazz & Heritage Festival, I was rocked by a bolt of adult R&B inspiration.  I hustled to the nearby Celebration at the Station to hear Patti Austin perform with the Kansas City Symphony.  At the conclusion of her portion of the massive event, I raced back to the Jazz District in time to catch Oleta Adams revive her 1991 smash “Get Here”.  Rarely has my unironic embrace of slow jams been more rewarding.


---
I reviewed the first and second days of the Kansas City Jazz & Heritage Festival for The Kansas City Star.  I pontificate on the inaugural edition of the festival at Plastic Sax.

---
Samantha Fish’s two-night stand at Crossroads KC was my show of the week for The Kansas City Star and Ink magazine.

---
I gave Oleta Adams the KCUR Band of the Week designation.

---
Gregg Allman has died.  He seemed frail at a 2015 casino gig I reviewed for The Kansas City Star.

---
The new reissue of Mulatu of Africa is unassailably groovy.  The many imperfections of Mulatu Astatke’s 1972 album somehow makes the music even more perfect.  RIYL: Roy Ayers, qi, Sun Ra.

---
Robert Johnson has nothing on Willie Nelson.  God’s Problem Child is yet another improbably strong album from the 84-year-old icon.

(Original image of the Celebration at the Station by There Stands the Glass.)
Posted by Happy In Bag at 10:06 AM No comments: 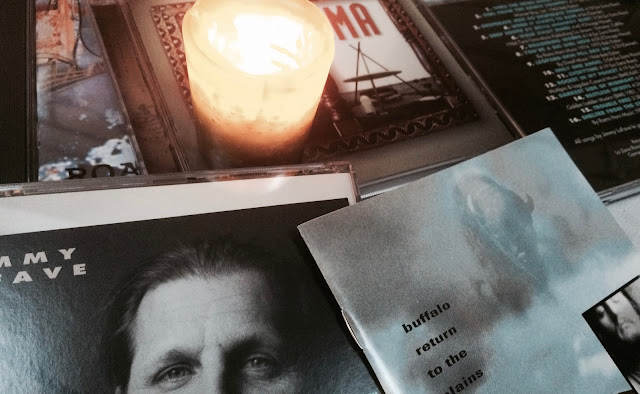 When I began attending SXSW more than 25 years ago, the event was a business conference that doubled as a showcase for locally based musicians.  Performances by the hometown hero Jimmy LaFave were among the most anticipated components of those early years.  Even though his popularity failed to keep up with the staggering growth of SXSW, LaFave remained faithful to the rootsy sound that once made him the toast of the Texas town. Nora Guthrie’s introduction of LaFave at the Folk Alliance International conference on February 18 was was warm and effusive.  Even though I wasn’t aware that he’d been diagnosed with an incurable form of cancer, I was moved by an intimate performance that included one or two of his signature Bob Dylan covers.  LaFave died last week.


---
I reviewed a concert by the Black Angels and A Place to Bury Strangers.

---
I reviewed outings by Railroad Earth, the Yonder Mountain String Band, Fruition and the Shook Twins at the Bluegrass in the Bottoms festival.  I also wrote a preview of the two-day event.

---
Julian Vaughn was the recipient of my most recent KCUR Band of the Week designation.

---
Chris Cornell has died.  He looked and sounded great when I saw him with Soundgarden eight days ago.

---
I cued up Diana Krall’s Turn Up the Quiet out of professional obligation.  Boy, was I surprised!  The hushed collection of standards is easily my favorite release by the Canadian.  RIYL: Julie London, makeout music, June Christy.  Here’s ”Moonglow”.

---
I’m embarrassingly easy.  Add horns and a semblance of swing to almost anything and I’m in.  I adore the new sound Pokey LaFarge unveils on Manic Revelations.  Here’s ”Riot In the Streets”.

---
I keep listening to Mary J. Blige’s Strength of a Woman in fruitless attempts to convince myself that it’s not a bitterly disappointing mess.  ”Love Yourself” typifies the miscalculations.

(Original image by There Stands the Glass.)
Posted by Happy In Bag at 3:11 PM No comments: 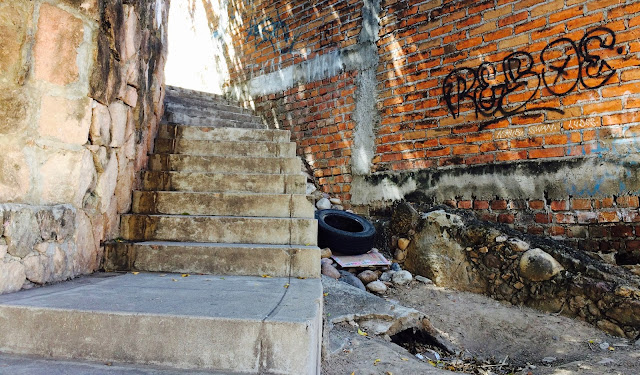 Regrets, I’ve had a few thousand.  Like Frank Sinatra, I did it my way.  It hasn’t always been easy.  I was reminded of one missed opportunity while listening to the Mavericks’ new release Brand New Day.

An unsolicited CD by the then-unknown Miami based band crossed crossed my desk when I was the sales manager of a beleaguered music distribution company in 1990.  Even though I loved the music, I had to pass.  As a one-off, unproven project in the pre-internet era, I knew that timely payment to the band for shipped units would be impossible.

Having recognized the music’s potential, however, I should have offered to assist the Mavericks in a different capacity.  I would have loved to have been a part of selling and promoting What a Crying Shame, Music for All Occasions and Trampoline, three of my favorite albums of the 1990s.

The band was marketed as a country act at its commercial peak, but Brand New Day continues the band’s drift into an alternate universe in which Roy Orbison, Johnny Otis, Pérez Prado and Phil Spector are in the same band. It’s gloriously preposterous.  Here’s the title track.


---
I reviewed the sixth of Garth Brooks’ seven sold-out concerts at the Sprint Center.

---
I reviewed a concert by Soundgarden and the Dillinger Escape Plan on Sunday.

---
I honored Ensemble Ibérica with the KCUR’s Band of the Week designation.

---
I didn’t attempt to hide my inner fanboy in my extended concert preview of Chance the Rapper’s return to Kansas City.

---
I extol Bobby Watson’s Made in America at Plastic Sax.

---
Bruce Hampton has died.  I first heard the jam band pioneer perform at a festival in a field outside of Lawrence, Kansas, in the early 1990s.

---
Patti LaBelle performs a Broadway-style version of jazz on her florid new album Bel Hommage.  It’s hammy, cheesy and entirely delicious- and I love it.  LaBelle pitched the project on QVC.

---
The combination of Avishai Cohen, Manfred Eicher and Nasheet Waits lights up several of my pleasure centers.

---
Sarah Shook & the Disarmers’ Sidelong doesn’t quite do it for me.  Even so, I hope to catch the group in 2017. RIYL: Grisly Hand, boozin’, Bottle Rockets. Here’s ”Dwight Yoakam”.

---
Don Bryant’s Don’t Give Up On Love is an unexpected treat.  RIYL: Otis Clay, soul survivors, Syl Johnson.  Here’s ”How Do I Get There?”.

(Original image by There Stands the Glass.)
Posted by Happy In Bag at 10:11 AM No comments: 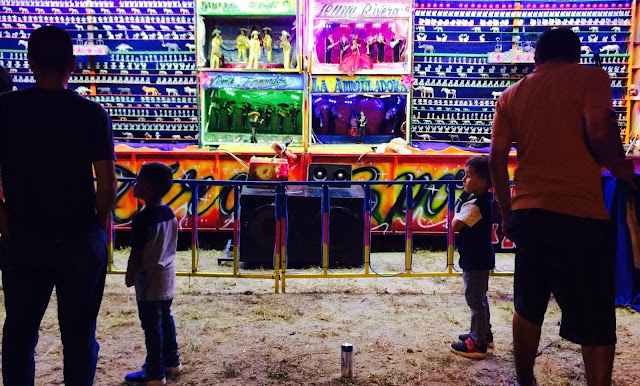 I went to Mexico with the intention of rejuvenating my mind and resting my ears.  It didn’t work out.  I spent my evenings at a beach festival that showcased the folkloric music and dance styles of Latin America.  I caught dozens of amazing performances by ensembles from Chile, Argentina, Guatemala, Costa Rica and various Mexican states while sipping on dollar beers.  The rest of the music I heard was involuntarily imposed on me.  The hits that blasted in almost every public space drove me to distraction.  I must have heard Luis Fonsi’s “Despacito,” Juan Gabriel’s “Queiro,” the Eagles’ “Hotel California,” Bruno Mars’ “Uptown Funk” and Toto’s “Africa” a dozen times apiece.  Por qué?


---
I spent the last three nights at Ink’s Middle of the Map Fest.  I reviewed a concert by De La Soul, Talib Kweli, Ro Ransom, Stik Figa and the Indyground crew on Saturday.  I admired Jason Isbell and Strand of Oaks on Friday.  I critiqued Erica Joy, the Uncouth, 34 and Jaenki on Thursday.

---
I examined the 1975 in a preview of the band’s concert at Starlight Theatre.

---
I praised Ibérica, the beguiling new album by Matt Otto and Ensemble Ibérica, at Plastic Sax.

(Original image by There Stands the Glass.)
Posted by Happy In Bag at 6:16 PM No comments: