Album Review: BJ the Chicago Kid- In My Mind 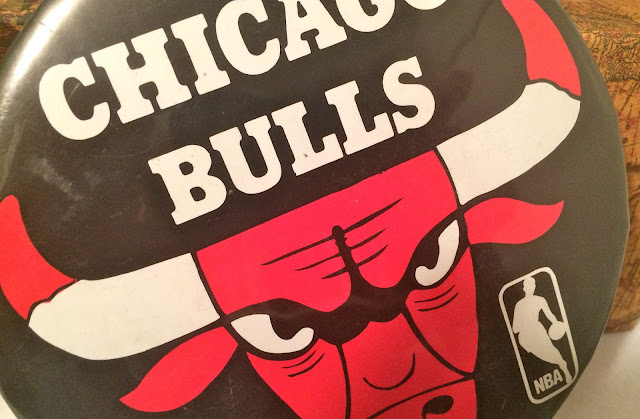 Some of the people who share my enthusiasm for Frank Ocean whine about the absence of a follow-up to his 2012 masterpiece Channel Orange.  I have better things to do.  Appreciating good-to-great albums by male R&B artists including Avant, Babyface, Bilal, D’Angelo, D.R.A.M., José James, Jodeci, R. Kelly, Miguel and the Weeknd has kept me busy during the past three years.  Add BJ the Chicago Kid to that list.  In My Mind doesn't achieve the heights of Channel Orange, but even the album's weakest tracks are enjoyable Keith Sweat, Prince and D’Angelo knockoffs.  Frank should feel free to take his time.  I’ll be in ”Church”.


---
I reviewed Dwight Yoakam’s sold-out concert at the Uptown Theater.

---
I wrote an extended concert preview about Wavves.

---
The album release show for Be/Non’s Mystic Sunrise/Sunset Magic at the Scottish Rite Temple was mind-blowing.

---
Much of Your Friend’s Gumption resembles the vacillating sounds I heard when I suffered from night terrors as a child.

---
There’s nothing I don’t like about the song and the video for Josh Hoyer & Soul Colossal’s ”Parts of Man”.  RIYL: Lee Fields, not-so-silly love songs, Percy Sledge.

(Original image by There Stands the Glass.)
Posted by Happy In Bag at 5:17 PM 1 comment: 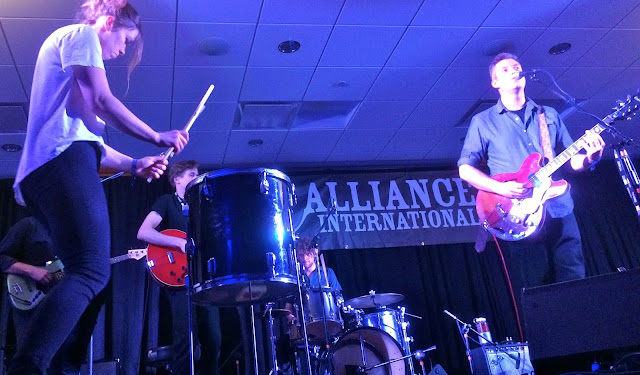 I reviewed 19 showcases at the Folk Alliance Conference on Thursday, Friday and Saturday.  I’m not particularly enthused by dust bowl ballad revivalists, bluegrass traditionalists or fiddle champions, but I found plenty of international acts, outsider musicians and straight-up rock bands to embrace.  Video links to my ten favorite Folk Alliance acts of 2016 follow.


---
I reviewed Bill Frisell’s concert at the Nelson-Atkins Museum of Art on Sunday.

---
I reviewed a concert by Vance Joy, Elle King and Jamie Lawson on Thursday.

---
I  reviewed Live at Pilgrim Chapel, the new album by David Basse and Joe Cartwright, for KCUR.

---
Denise Matthews, the woman better known as Vanity, has died.  She was my first celebrity interview.  I met her in a hotel suite as she was promoting the action movie The Last Dragon.  I haven’t forgotten the scent of her perfume and each alluring fold of her bathrobe.

---
The EPK about Lou Tavano doesn’t convince me that I need to hear the French vocalist’s album, but her speaking voice… oh man.

---
Lawrence Brownlee and Jason Moran for the win.

(Original image of Chris Bathgate’s band by There Stands the Glass.)
Posted by Happy In Bag at 7:26 PM 1 comment: 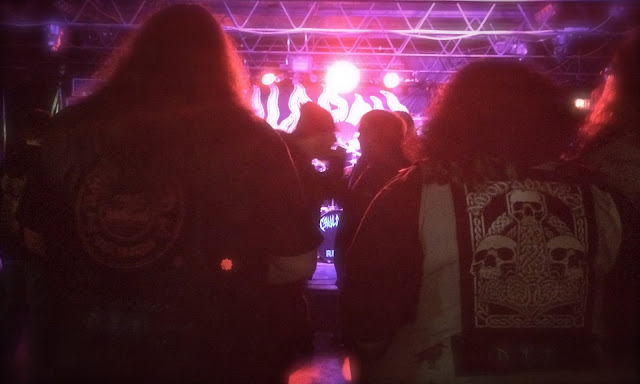 Being the oldest guy in the room didn’t phase me, but I started to panic on the evening of Ash Wednesday when I realized that I might have been the feeblest person at Aftershock.  Almost every one of the 75 other people at the metal show was capable of cleaning my clock.

I documented my appreciation for Exmortus’ Ride Forth last month.  The new songs by the Los Angeles metal band sounded even better live.  The four guys in the band, incidentally, may have been the only men at the Merriam venue smaller than me.

Sensing that I was pressing my luck and knowing I’d already received a great deal in exchange for my $20 investment, I didn’t stick around for the headlining set by Enforcer.  Even so, I regret not seeing a Swedish band accustomed this playing for a few dozen people in Kansas.


---
I boldly predicted that the Steeldrivers would win a Grammy Award in my review of the band’s concert at the Folly Theater on Friday.  I was right.

---
I reviewed a concert by Avant and Silk at the Uptown Theater.

---
I have yet to hear The Life of Pablo, but I’m looking forward to digging in.  Kanye West’s previous six albums are nothing short of great.

(Original image by There Stands the Glass.)
Posted by Happy In Bag at 5:15 PM No comments: 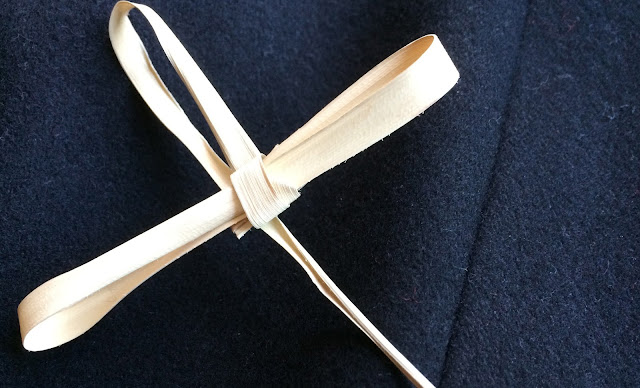 Even in the insular world of Christian music, you’re nobody until you’ve attracted a congregation of haters.  Lecrae sold out a 5,800-capacity arena in his most recent appearance in the Kansas City area.  He addresses his unusual status as an explicitly Christian artist who keeps one foot planted on secular turf on “It Is What It Is,” one of many impressive tracks on his new mixtape Church Clothes 3.

While much of his early work is corny, Lecrae has become one of hip-hop’s most vital artists during an implausible era in which the world’s most acclaimed rapper explicitly examines his Christian faith in his songs.  Like Kendrick Lamar, Lecrae is troubled by the contradictions that confront him.  A 16-minute promotional video for Church Clothes 3 includes a few of the mixtape's most conflicted moments.

When American churches scuff they Toms on our brother's dead bodies as they march to stop gay marriage... We had issues with Planned Parenthood too, we just cared about black lives outside the wombs just as much as in. -Propaganda, on Lecrae’s “Gangland”


---
I reviewed Bach Aria Soloists’ The Adventures of Don Quixote concert for The Kansas City Star.

---
I reviewed a concert by Lamb of God, Anthrax, Deafheaven and Power Trip for The Kansas City Star.

---
I reviewed a Bukeka Shoals concert at Plastic Sax.

---
My Rockfest headliner prediction was wrong.  I had expected Five Finger Death Punch, Megadeth or Volbeat to top the bill.  Instead, Disturbed is returning as the headliner.

---
Earth, Wind & Fire was second only to Stevie Wonder in sparking my interest in soul when I was a kid.  The brilliant Maurice White has died.

---
While King’s creamy We Are King goes down easy, I’d rather listen to my old SWV, DeBarge and TLC albums.  Here’s ”The Greatest”.

---
I like Aoife O’Donovan’s In the Magic Hour when it evokes Astral Weeks and Bryter Layter.  Too much of the album, however, resembles safe coffeehouse fare.

---
I suspect that my affection for Savages’ Adore Life is rooted in nostalgia.  RIYL: Gang of Four, college rock radio circa 1987, Sonic Youth.

---
Tord Gustavsen freaks me out.  The EPK for the latest album by the vampire-like pianist is spooky.

---
Susan Tedeschi has surpassed her hero.  I’ve heard almost every Bonnie Raitt album.  None is better than the Tedeschi Trucks Band’s Let Me Get By.  The two TTB concerts I’ve attended have also impressed me more than any of four or five (post-1980) Raitt shows I’ve seen.

---
The tracks on Regina Belle’s The Day Life Began sound as if they belong on separate albums.  I adore the gospel song (“He’s Alright”) and the sophisticated uptown jazz number (“A Night of Love”).

---
I recently discovered the late vocalist Victoria de los Ángeles.  What is this sorcery?

---
Black Tusk’s Pillars of Ash is every bit as solid as headbangers say it is.  RIYL: pre-rap Beastie Boys, metallic sludge, Mastodon.

---
The first half of Rihanna’s Anti is embarrassingly awful.  The last several tracks are keepers.

---
I didn’t know that Winston Jarrett was still among us.  A new in-studio session for KEXP is impressive.

---
Technical death metal may be the most awful genre in music.  And I can't stop listening.  Obscura's Akróasis sounds like Lucifer fronting Return to Forever.  Here’s the title track.

(Original image by There Stands the Glass.)
Posted by Happy In Bag at 7:04 AM 2 comments: 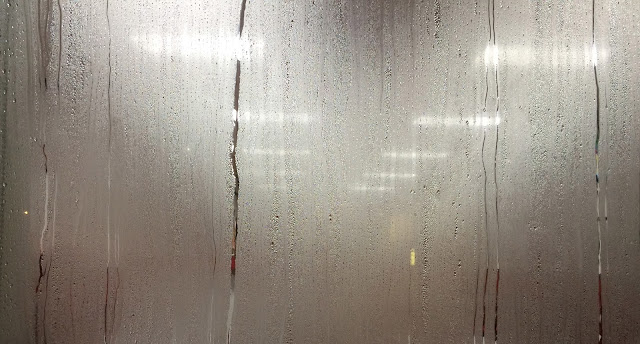 I listen to instrumental music as I write.  Words from vocalists and rappers disrupt my already tenuous ability to concentrate.  Dramatic orchestral works are also out of the question.  While I can’t focus as Hélène Grimaud plays a stirring rendition of Sergei Rachmaninoff’s flashy Piano Concerto No. 2, her unusual new album Water provides ideal accompaniment to my typing.  A thought-provoking and creativity-inducing combination of solo piano compositions by the likes of Leoš Janáček and electronic “transition” pieces, Water will likely provide me with conducive workplace inspiration for the remainder of 2016.


---
I reviewed a concert by Mark Chesnutt, Joe Diffie and Lorrie Morgan.

---
I contribute the weekly Local Listen segment to KCUR.  Your Friend was featured last week.

---
I write weekly music and event previews for The Kansas City Star and Ink magazine.

---
Reading about the Fat White Family’s antics is more enjoyable than listening to the music created by the band of British hooligans.  Songs for Our Mothers is RIYL: exhaustion, the Brian Jonestown Massacre, hangovers.  The video for ”Whitest Boy on the Beach” is suitably messed up.

(Original image by There Stands the Glass.)
Posted by Happy In Bag at 4:50 PM No comments: