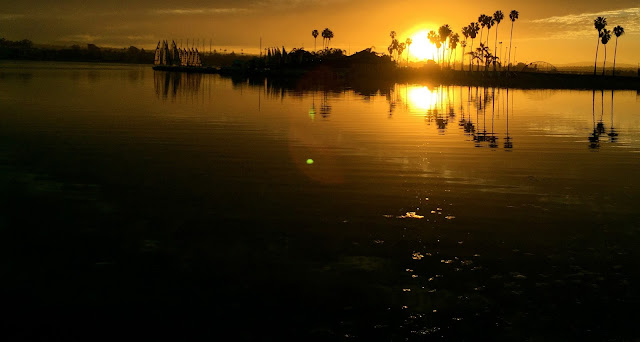 I have no patience for the several important new albums that were released on Friday.  My obsession with “Slide” is in the way.  The collaboration between Calvin Harris, Migos and Frank Ocean is pure pop bliss.  “Slide” may be the best step dance song since R. Kelly’s joyous 2003 jam “Step in the Name of Love”.

---
I wrote an extended concert preview about Valerie June for The Kansas City Star and Ink magazine.

---
Charlie Wilson has supplied an inordinately large portion of the soundtrack of my life.  Alas, In It To Win It is disappointing.  Only two or three songs are exceptional.  Here’s ”I’m Blessed”.

---
The sparseness of La Diversité fooled me at first.  The open spaces cleverly obscure the depth of the latest effort by the Belgian saxophonist Nicolas Kummert and Lionel Loueke.  RIYL: Chris Potter, eurojazz, Pat Metheny.

---
It’s not them; it’s me.  Windy City and Highway Queen, the new albums by Alison Krauss and Nikki Lane, don’t move me.

---
Adam Schneit reached out to me about securing coverage of his 2016 album Light Shines In.  I’m pleased to report that it’s superlative progressive jazz in the vein of Bill Frisell and Steve Lacy.

(Original image by There Stands the Glass.)
Posted by Happy In Bag at 9:25 AM No comments: 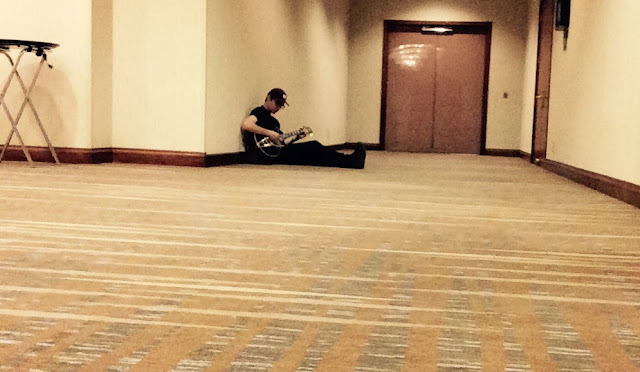 I spent three nights working at the Folk Alliance conference last week.  (My summaries are here, here and here.)  While I admired a lot of what I heard- showcases by Bill Miller, Gaelynn Lea, Barbara Dane, Elle Márjá Eira and Wink Burcham were magnificent- I felt a bit detached.

A good portion of the attendees had dedicated their lives to folk music.  Not me.  I might have been forcibly ejected from the conference had the true believers around me known that I had listened to the latest release by the rapper Future on the way to the event each night.

During one showcase, I was seated next to a man with no awareness of personal space.  I suspected that his life was transformed by Bob Dylan, Joan Baez and Pete Seeger in the early ‘60s.  He went into ecstatic paroxysms when a performer broke into the protest song “(Ain’t Gonna Let Nobody) Turn Me Around.”

I was both annoyed and envious.  That was his moment.  What’s mine?  If I love everything, am I deeply attached to nothing?   I often feel like a profligate philanderer who sleeps with a different partner every night and inevitably winds up alone and friendless.


---
I reviewed Run the Jewels’s return to the Midland theater.

---
I elected to hit the Green Lady Lounge instead of attending the Kansas City Folk Festival on Sunday afternoon.  My notes on Dominique Sanders’ momentous weekend are posted at Plastic Sax.

---
Benjamin Netanyahu bumped me off the airwaves last week.  I was slated to yak about the Ozark Mountain Daredevils.

---
I confess to reading the recent spate of rock-is-dead essays with almost as much relish as the inescapable jazz-is-dead dissertations.  And man, when I hear certain songs on “rock” radio stations, I’m overwhelmed with an urge to break stuff.  Uniform’s Wake in Fright makes me feel better.  Excoriating noise in the vein of Big Black and Jesus Lizard, Uniform’s Wake in Fright is a vicious ghost of rock past.  Here’s ”Tabloid”.

---
The New Year's Concert 2017 with Gustavo Dudamel is less than three hours long, but it took me more than a month to work my way through the opus.  Maybe Vienna isn’t for me.

---
I can’t defend my affection for John Garcia’s The Coyote Who Spoke In Tongues.  It’s a bombastic metal-goes-acoustic jam.  And I love it.  RIYL: Alice In Chains, smoke, Kyuss.

(Original image by There Stands the Glass.)
Posted by Happy In Bag at 11:24 AM No comments: 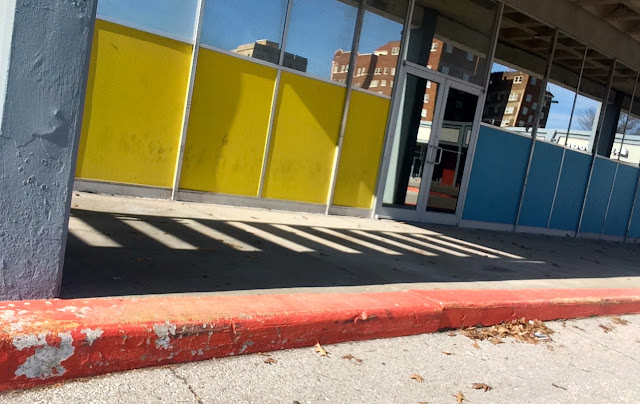 Ten absorbing new albums have provided comfort and distraction during my recovery from an invasive surgical procedure.  My ranking and notes follow.

1. Syd- Fin.  The promising producer a.k.a.Syd the Kid, a.k.a. The Internet, isn’t Prince reincarnated, but she has her moments.  RIYL: The Weeknd, works in progress, Usher.

4. Mats Gustafsson- Ljubljana.  Cracking the code of the free jazz duet between the saxophonist and pianist Craig Taborn is well worth the effort.  RIYL: Albert Ayler, room-clearing noise, Matthew Shipp.

(Original image by There Stands the Glass.)
Posted by Happy In Bag at 11:51 AM No comments:

I Am a Small Axe 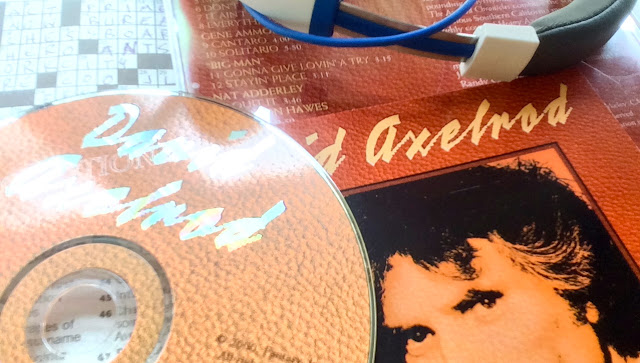 Managers at an area tavern invite luminaries to spin records at their establishment.  I considered angling for an engagement until I attended one of the functions.  The volume was absurdly low and I seemed to be the sole patron who was listening.  Even so, I recently created a playlist that’s heavy on groove-based jazz, funk, Latin boogaloo, vintage R&B and neo-soul that I might someday employ in a different setting.  In other words, my mix sounds a lot like a compilation of the music of David Axelrod.  The multi-dimensional artist died on February 5.


---
I reviewed a concert by Datsik, Crizzy and Virtual Riot.

---
I wrote extended concert previews about Chief Keef and Gaelynn Lea for The Kansas City Star and Ink magazine.

---
The Menzingers’ After the Party isn’t for me, but many of my pals will fully embrace the strong album.  RIYL: the Hold Steady, balding punks, the Get Up Kids.  Here’s ”Lookers”. 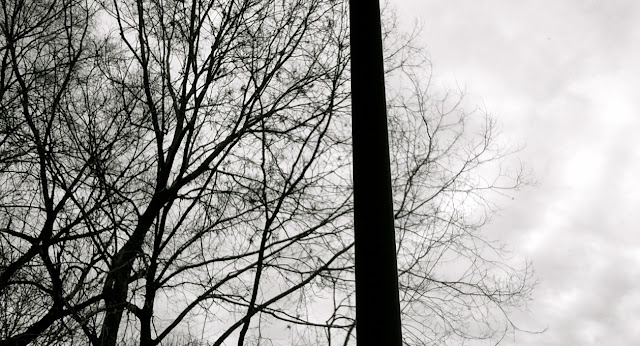 Mark Eitzel has my number.  Not literally- we last spoke in the ‘90s.  Yet his new album Hey Mr. Ferryman resembles a musical narration of my inner voice at 3 a.m.  Like Eitzel, I’m a fifty-something American whose life was changed by the music of Frank Sinatra, Sonny Rollins and Joe Strummer.  ”The Last Ten Years”, the opening track of Hey Mr. Ferryman, is loaded with zingers like “I saw the bartender’s love- I saw it in her yawn.”  The songs in which Eitzel banters with Jesus, dreams of slow-dancing in a kitchen and paints a portrait of a forlorn man who “gets grumpy trying to keep hope alive” hit uncomfortably close to my dilapidated home.


---
I reviewed Winter Jam at the Sprint Center.

---
I pondered the enigmatic Erica Joy on KCUR.

---
I wrote an extended concert preview about Eric Church’s return to the Sprint Center.

---
An anti-rap editorial in The Sedalia Democrat was inspired by a KCUR segment based on my advocacy of a song by the Popper.

---
Delbert McClinton doesn’t give a flip on Prick of the Litter.  And that’s a good thing.  The new album is RIYL Dan Hicks, constructive indifference, Leon Russell.

---
Boosie’s fatalistic ”Crabs In a Bucket” is my new theme song.

---
Into the Blue, an EP by a trio led by the teen jazz pianist Emily Bear, is an exercise in tedious formalism.  RIYL: Joey Alexander, hype, Bill Charlap.

(Original image by There Stands the Glass.)
Posted by Happy In Bag at 1:10 PM No comments: