I couldn’t afford not to go to the Les Arts Florissants concert at Helzberg Hall last Saturday.  The 80% discount the presenter offered to everyone on its mailing list reduced the price of the ticket I purchased in the back row of the room to $4.

At that absurdly low sum, I was willing to bail at intermission if the show wasn’t entertaining.  Rather than finding Les Arts Florissants tiresome, I wished that the vocal and instrumental ensemble that specializes in playing baroque music on period instruments would have performed all night.

An exceedingly sober review of the concert bears the headline “Consistency, grace, good taste.”  Those words don’t reflect my reaction to the presentation.  I’d go with “Sexy, steamy, fun” instead.  Vintage footage of a Les Arts Florissants show captures only a bit of the ensemble’s sultry side that enthralled this bargain-hunter on Saturday.


---
I reviewed a concert by the Tedeschi Trucks Band.

---
I reviewed a concert by Magic Man, the Griswolds and Panama Wedding.

---
My friends don’t call me Rain Man for nothing.  My stilted commentary is featured in an audio review of Logan Richardson’s Shift that was aired by KCUR on Wednesday.

---
I chatted about Duncan Burnett with Steve Kraske on KCUR last week.

---
I wrote an extended concert preview about the Arcs.

---
I wrote an extended show preview for R. Kelly’s return to the Sprint Center.

---
The Kansas City band Making Movies created a video for “Ready For the Rain.”

---
Most of Mind of Mine, the solo debut album by former One Direction member Zayn Malik, is an unabashed homage to R. Kelly.  In other words, it’s pretty good.  Here’s ”Befour”.

---
The press release for the Yellowjackets’ Cohearence suggests that the band offers a “modern take on Weather Report.”  If by “modern” the publicist meant “watered down,” the assertion is spot-on.  And I’m not even going to pretend that I’m too cool for sophisticated elevator music.  The Yellowjackets are one of my favorite contemporary jazz groups.

(Original image of a facade in Kansas City’s jazz district by There Stands the Glass.)
Posted by Happy In Bag at 10:09 AM No comments: 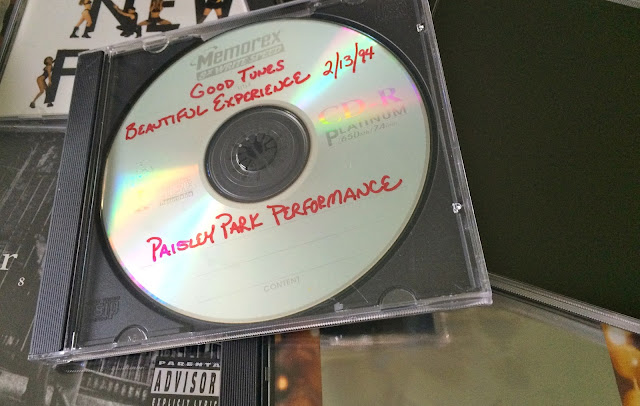 I wore out the grooves on all four sides of 1999 in the months following the release of the album.  It’s a tribute to the universal appeal of the music that none of the guys in my college dorm ever complained.

Such was the power of Prince.  He changed everything.

The six albums beginning with Dirty Mind and ending with Sign o’ the Times is one of the greatest strings of consecutive brilliant releases in pop music history.

In terms of altering both the musical and cultural landscapes, Prince’s feat is matched by only a handful of artists including the Beatles, Bob Dylan, Sly and the Family Stone and Kanye West. 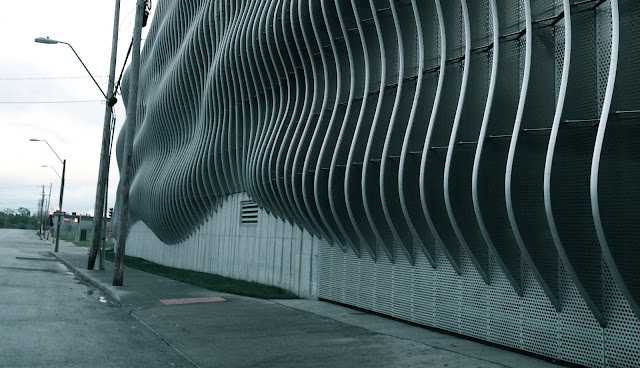 Although the designation doesn’t have any impact on my estimation of the man, I’m glad that Henry Threadgill won a Pulitzer Prize yesterday.  In his self-congratulatory report, Howard Reich notes that Ornette Coleman was awarded a Pulitzer in 2007.  David Murray could be the next titanic jazz saxophonist and composer to be similarly honored.  Perfection, Murray’s new collaboration with pianist Geri Allen and drummer Terri Lyne Carrington, is the latest entry in a massive discography that was already loaded with thrilling music.  Unlike the output of most supergroups, Perfection doesn’t disappoint.   With a previously unrecorded Coleman composition as its centerpiece, the album shot past Logan Richardson’s Shift as my favorite jazz release of 2016.


---
I reviewed a concert by the Bad Plus Joshua Redman at the Gem Theater.

---
The most recent rounds of the weekly music previews I write for The Kansas City Star and Ink magazine are here and here.

---
I wrote an extended show preview about the Tedeschi Trucks Band for The Kansas City Star and Ink magazine.

---
Gib Guilbeau, an integral part of the West Coast country-rock revolution, has died.  (Tip via BGO.)

---
Loyalty is good.  Nostalgia is bad.  That’s why I don’t entirely trust my affection for Deftones’ Gore.  Combining Boy-era U2 and Disintegration-era the Cure with thrash elements makes my heart go pitter-patter, but I’m inclined to dismiss the approach as a cynical parlor trick.  Pals who suggest that I need to get in the “right frame of mind” to properly appreciate Gore are undoubtedly right, but I’m on a straight-and-narrow tip at the moment.  Here's "Prayers/Triangles".

---
Hayes Carll’s Lovers and Leavers is a spot-on evocation of the moment in the 1970s when Billy Joe Shaver, Willie Nelson, Jerry Jeff Walker and Guy Clark were at their artistic peaks.

(Original image by There Stands the Glass.)
Posted by Happy In Bag at 1:52 PM No comments: 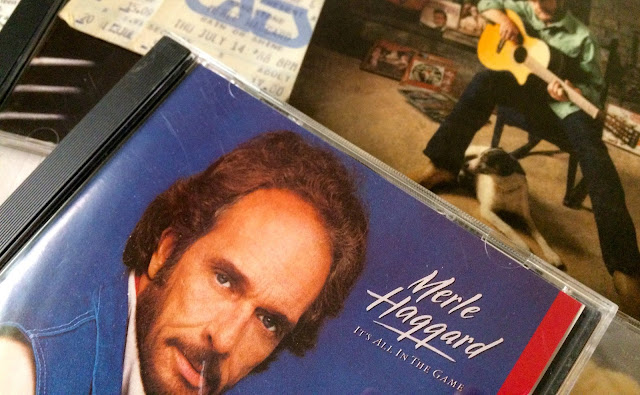 As I’ve mentioned several times in this space, I was raised on country.  A few portions of my indoctrination didn’t initially take.  Ray Price’s countrypolitan hits, for instance, struck me as corny until my hair began to gray.

I always loved the music of Merle Haggard.  The Songs I’ll Always Sing compilation was my dad’s preferred Merle album.  And hearing the latest Hag hit on the radio pleased both of us.  One of the biggest mindblowers in my dad’s record collection was A Tribute to the Best Damn Fiddle Player in the World (or, my salute to Bob Wills).   The crazed Western swing broadened my horizon.

My dad allowed me to tag along with him to a few Merle concerts when I was a kid.  When I later took dates to Merle’s shows, I desperately hoped I wouldn’t run into my old man.  That confession is especially painful now that both Merle and my dad are gone.


---
I reviewed a concert by Joe Ely, Ruthie Foster and Paul Thorn.

---
I reviewed the Christian McBride Trio’s concert at the Folly Theater.

---
My favorite selection of the master’s recital by Garrett Torbert at St. John’s United Methodist Church last Friday was a reading of Aaron Copland’s ”The Promise of Living.”  Here’s a rendition by a larger group.

---
Ralph Peterson’s ably played but entirely predictable Triangular III is precisely the sort of mainstream jazz album that causes me to question my commitment to the form.

---
The EPK for In Movement, the new collaboration between Jack DeJohnette, Ravi Coltrane and Matthew Garrison, is compelling.

---
Maxwell’s BLACKsummer’snight was my top album of 2010.  I’m atwitter about ”Lake By the Ocean”, the lead track from the long-anticipated follow-up.

---
Bombino’s lovely Azel is RIYL: Tinariwen, the Sahara, Terakaft.  Here's ”Inar (If You Know the Degree of My Love For You)”.

(Original image by There Stands the Glass.)
Posted by Happy In Bag at 3:28 PM No comments:

The Ties That Bind: Bruce Springsteen and the E Street Band at the Sprint Center 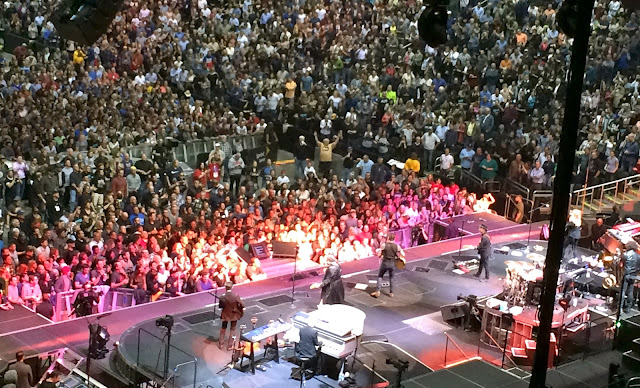 I found a lover's rendezvous.

_ and I had only one interest in common when we first met.  Girl-crazy 15-year-olds, we pursued imprudent dalliances with a determination that mystified our less amorous classmates.

I got some beer and the highway’s free.

We bonded after I introduced _ to alcohol and Bruce Springsteen.  He never got his fill of either.

I took a wrong turn and I just kept going.

While alcohol has never been more than an amusing diversion for me, _ drank constantly.  My passion for Springsteen stalled with the 1984 release of Born in the U.S.A. but  _ went on to write his senior thesis about the artist’s response to the Reagan era.  He also caught more than two dozen Springsteen concerts.

I dubbed _’s copy of The River on the day the album was released in 1980.  I can’t quite remember what we illegally consumed before and during Springsteen’s 1981 concert in support of the album at Kemper Arena in the West Bottoms of Kansas City, but I recall that it was a massive night.

Is a dream a lie if it don't come true, or is it something worse?

We gradually drifted apart, partly because I just couldn’t hang.  It took me a full day to recover after each of the handful of occasions we reunited during his last years.

The price you pay.

I brought a boombox and a copy of The River to _’s room in a hospice two days before his body gave out.  He was coherent enough to indicate that he appreciated the gesture.

My brain takes a vacation just to give my heart more room.

The tears that streamed down my face at Thursday’s concert at the Sprint Center, consequently, didn’t come as a surprise.  I cried for myself during “Independence Day” and lost it while thinking of _ as the band performed “Wreck on the Highway.”

They can’t touch me now.

Had I not been sober and in the arms of the woman I love, I might not have made it through the night.

(Tim Finn wrote a proper  review of the concert. Original image by There Stands the Glass.)
Posted by Happy In Bag at 3:04 PM No comments: 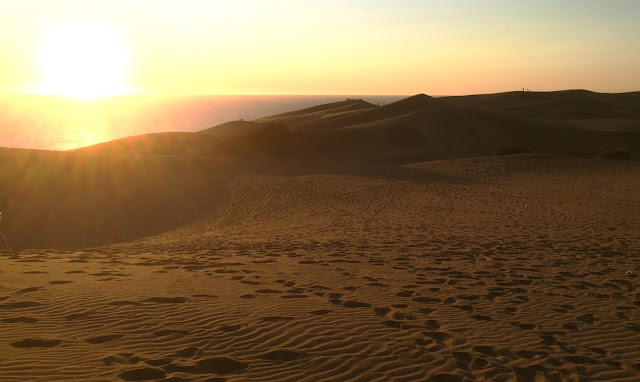 Summer has arrived.  I first felt the supremely relaxed sensation that I associate with the combination of sunburn, sangria and a refreshing evening breeze when I encountered ”Perfume do Invisível”, the opening track of Céu's Tropix.  She mixes campy lounge music with contemporary electronic grooves on the intoxicating new album.  Tropix sounds as if Seu Jorge, Beck and Elis Regina passed out on inflatable rafts in the same Brazilian swimming pool.


---
I reviewed Matt Otto’s Soliloquy for KCUR.  There’s a corresponding audio feature at the link that doubles as a case study in Asperger syndrome.

---
I wrote an extended preview of Gary Clark Jr.’s concert at the Uptown Theater.

---
My review of a concert by Pablo Ziegler’s Quartet for New Tango is posted at Plastic Sax.

---
For the Imperfect, For The Dilligent, the latest effort from the Kansas City duo BLKFLANL, is RIYL: J Dilla, backpacks, Madlib.

---
Have I no shame?  I’m horrified by my affection for Babymetal’s Metal Resistance.  Here’s ”Karate”.

(Original image of Concón by There Stands the Glass.)
Posted by Happy In Bag at 2:12 PM No comments: