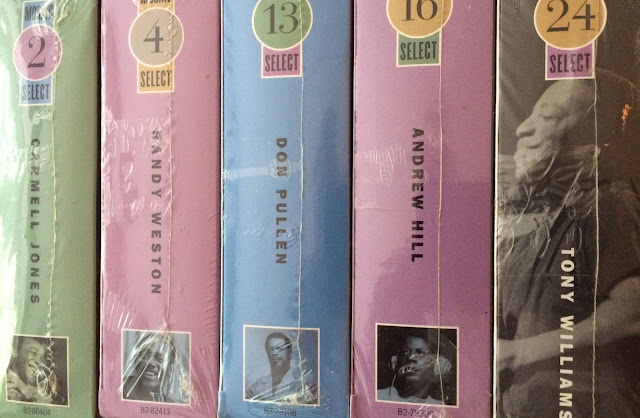 I’m in the process of culling rather than expanding my music collection.  Yet I couldn’t resist checking out an estate sale a few miles from my house last week.  Targeted online advertisements promised that thousands of vinyl albums, compact discs and books would be available.  I almost became physically aroused by what I encountered.  A man- presumably departed, RIP- had amassed a comprehensive collection centered on mainstream jazz.  My initial haul from the mother lode included the Mosaic box sets pictured here at $8 a pop.  I truthfully told my life partner that we could resell the limited edition titles on the Rolls Royce of jazz reissue labels for over $80 each, but I don’t think I can part with these gems.  I returned twice to scoop up several dozen obscurities by the likes of Morton Feldman, Lee Konitz and Steve Swallow.


---
I wrote an extended concert preview about Little Big Town for Ink and brief music previews for The Kansas City Star and Ink.

---
I contributed to a Local Listen segment about Shooting Star to KCUR.  (For the record, my text was altered.  I wouldn’t frame the band’s history in those terms.)

---
I document a pilgrimage I made while in New York at Plastic Sax.

---
Samuel Ramey may have been the primary draw at the Wichita Grand Opera’s production of Turandot at Yardley Hall yesterday, but it was Yunnie Park’s performance that floored me.

---
I had a good time at Hmph’s instore at Mills Record Company last week.

---
The Weeknd’s Beauty Behind the Madness sounds like a Michael Jackson impersonator singing over watered-down Kanye West beats.  While it’s better than the output of most pop stars, the album is hardly the important work of art many pontificators would have you believe.

---
Joell Ortiz’s Human is shockingly good.  I suppose I should have gone to his show at the Riot Room earlier this month.  Here’s "Lil’ Piggies".

---
The corny elements of Revive Music Presents Supreme Sonacy undermine the exciting aspects of the survey of young jazz artists.

---
Just as I was beginning to wonder if Myra Melford’s appearance at Take Five Coffee + Bar really deserved to top my June listing of My Favorite Performances of 2015 (So Far), I stumbled across her free (in both senses of thew word) Live at The Stone EP.  It’s wonderful.

---
Folktronica (ugh) ensemble Haiku Salut manages to encapsulate much of what I intensely dislike in contemporary music.  While I’m hating, I’ll add that Charlie Puth’s “Marvin Gaye” makes me want to throw myself under my lawnmower.

(Original image by There Stands the Glass.)
Posted by Happy In Bag at 1:26 PM 3 comments:

I bought a $15 ticket to be a part of the in-crowd at Madisen Ward and the Mama Bear’s joyous concert at the Midland theater last week.  The audience of 1,500 was the biggest I’ve seen for any single locally based artist in the past three years aside from Tech N9ne, the Kansas City Jazz Orchestra, Joyce DiDonato or the Kansas City Symphony.  Here’s Tim Finn’s review.


---
I reviewed last night’s Incubus, Deftones, Death From Above 1979 and the Bots concert.

---
I contributed a Local Listen segment about Samantha Fish to KCUR.

---
I play the role of Debbie Downer at the Charlie Parker Celebration.

---
Even with the lousy sound on some of the later stuff, Miles Davis At Newport 1955-1975: The Bootleg Series Vol. 4 serves as a spectacular survey of jazz history.

---
The Foreign Exchange’s Tales From the Land of Milk and Honey is RIYL: Soul II Soul, grown-and-sexy music, Bobbi Humphrey.  Here’s the video for the somewhat unrepresentative “Asking For a Friend.”

---
Oleta Adams, Chaka Khan and Nancy Wilson are among the guest vocalists on Terri Lyne Carrington’s The Mosaic Project: Love and Soul.   Here’s the EPK.

(Original image by There Stands the Glass.)
Posted by Happy In Bag at 11:13 AM No comments: 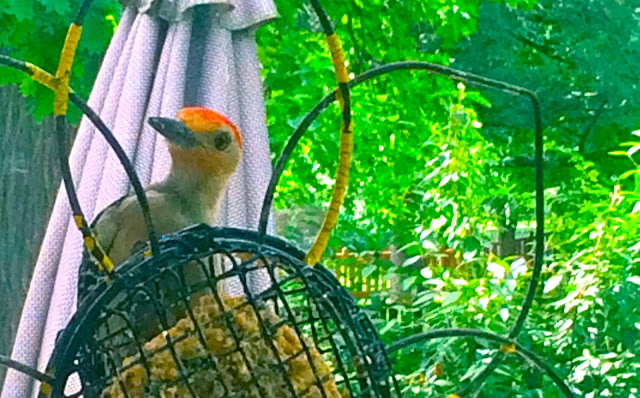 My defenses were down when I happened upon Troyka last week.  The British trio combines the prog-rock wankery of King Crimson, the geeky jazz fusion of Billy Cobham and the fluid modern jazz of Flying Lotus.  I melted within minutes.  To quote an irritating meme: “shut up and take my money.”  The trailer for the new album Ornithophobia and the snippets streaming at Amazon reveal the source of my latest guilty pleasure.


---
I reviewed Chris Brown’s concert at the Sprint Center.

---
Miguel's outing at the Midland theater last night is likely to be favorite concert of 2015. Here's my review.

---
I contributed a Local Listen segment about Lonnie McFadden to KCUR.

---
I laud Hmph and the Jorge Arana Trio at Plastic Sax.

(Original image by There Stands the Glass.)
Posted by Happy In Bag at 12:24 PM 1 comment: 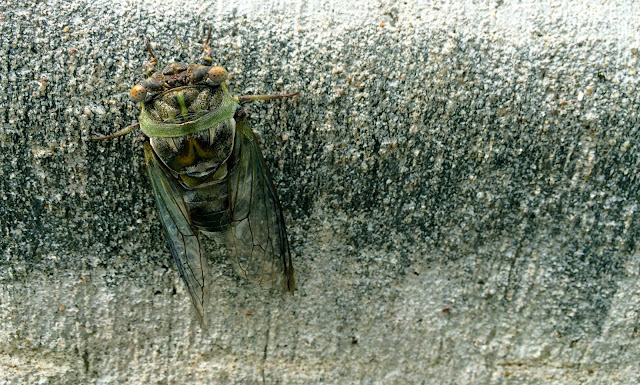 Partly because I’m not a 17-year-old Twitter fiend, the most recent spat between Ghostface Killah and Action Bronson doesn’t excite me.  Yet as someone who purchased the first Wu-Tang Clan album as a new release in 1993, I’m extremely interested in Ghost’s ongoing vitality.  The longtime favorite of There Stands the Glass has released two of the best albums of 2015.  The jazz-based Sour Soul and the R&B-oriented Twelve Reasons to Die II feature Ghost’s masterful flow and hilariously imaginative lyrics set to riveting music.

---
I contributed a Local Listen segment about A.J. Gaither to KCUR.

---
I write about my final visit to Take Five Coffee + Bar in Overland Park at Plastic Sax.  The August 15 closure leaves the Kansas City area with a single jazz venue that charges cover on weekends.

---
I listened to the Chemical Brothers’ Born in the Echoes the morning after spending the previous evening at a Phish concert.  Both ensembles make whimsical psychedelic party music.  The distinctions between the British duo and the Vermont noodlers are marginal.

---
Lamb of God’s Sturm Und Drang is a by-the-numbers metal album.  Works for me: I like counting.  RIYL: amazing back stories, Pantera, graying metal bands.

(Original image by There Stands the Glass.)
Posted by Happy In Bag at 11:40 AM No comments: 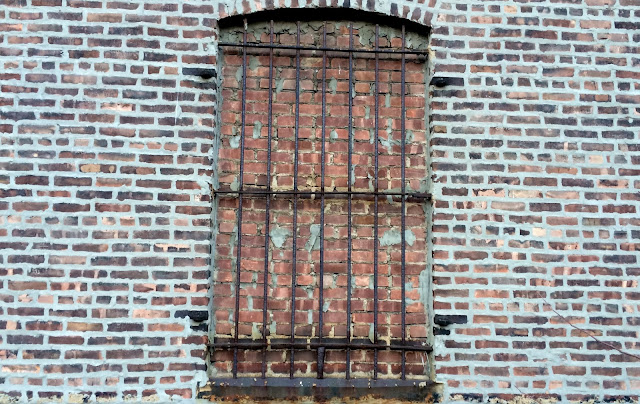 The elusive audience for jazz is hiding in plain view in 2015.  Millions are appreciating Kendrick Lamar’s To Pimp a Butterfly.  Hundreds of thousands more are dancing at concerts by the likes of Umphrey’s McGee.  Charlie Hunter must wonder what he has to do to get a single percentage of those people to pay attention to his funky new album Let the Bells Ring On.  It’s a jam album for jazz fans and jazz album for jam band aficionados.  It’s also begging for a hip-hop remix.  The populist sound of guitarist Hunter, trombonist Curtis Fowlkes and drummer Bobby Previte on ”These People?” is indicative of the album’s generous vibe.


---
I reviewed Dwight Yoakam’s concert in the Power & Light District.

---
I contributed a Local Listen segment about the Philistines to KCUR.

---
I listened to the reissue of In Through the Out Door over the weekend.  I didn’t comprehend until now that the Led Zeppelin album is an extended goof on Elvis.

---
I like the sound and feel of Ashes & Dust, Warren Haynes’ collaboration with Railroad Earth.  Too bad about the dodgy songs.

---
Until I listened to the compilation Come and Get It: The Best of Apple Records a few days ago, I’d never heard Brute Force’s ”King of Fuh”.  I wish I’d known about the novelty song when I was young enough to appreciate it.