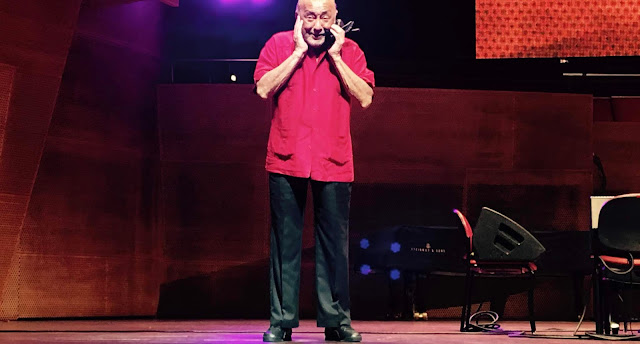 Top Five Songs
1. Fat Joe featuring Cardi B and Anuel AA- “Yes”
I apologize in advance.
2. Earthgang featuring T-Pain- “Tequila”
“Life is full of catchy hooks and uppercuts.”
3. Ameer Vann- “Emmanuel”
Cancel at your own risk.
4. The Highwomen- “Cocktail and a Song”
“Time’s running out.”
5. Alexandra Billings- “Let Her Be Okay”
I’m a crier.

I conducted the same exercise in August, July, June, May, April, March, February and January.

(Original image of Eddie Palmieri by There Stands the Glass.) 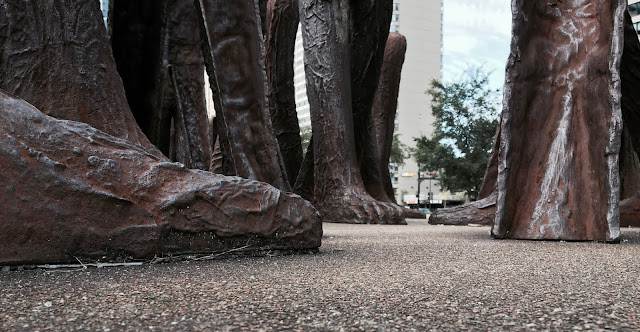 I was so entranced the first time I listened to Jóhann Jóhannsson’s 41-minute song cycle 12 Conversations With Thilo Heinzmann that I was surprised when it ended.  The album was seemingly over just moments after it began.  It’s my understanding that it’s the first full-length recording of Jóhannsson compositions by a string quartet.  Each of the instrumental selections played by the Echo Collective is the length of a pop song.  Several are just as catchy- and as heartbreaking- as ballads written by Paul McCartney and Smokey Robinson.  Jóhannsson was at his artistic peak when he died last year at 48.  I’m not prone to extended periods of mourning, but I may never stop selfishly grieving the forestallment of the new music that would have enhanced the remainder of my life.


---
I reviewed an extremely loud concert by the Jonas Brothers and Bebe Rexha at the Sprint Center for The Kansas City Star.

---
I write weekly concert recommendations for The Kansas City Star.

---
I wrap up my three-part examination of the Chicago Jazz Festival with a litany of fussy grievances at Plastic Sax.

(Original image by There Stands the Glass.)
Posted by Happy In Bag at 12:28 PM No comments:

Are You Ready for the Country?

A musician friend recently repeated Steve Earle’s assertion that contemporary country music is “hip-hop for people who are afraid of black people.”  I objected.  In addition to reeking of sour grapes, Earle’s quip epitomizes the sort of divisive cultural classism that’s contributing to the ongoing societal rupture.

I’m living proof that owning a MAGA hat isn’t required to appreciate current country hits.  Sure, the audience at last night’s Carrie Underwood concert was almost entirely white.  So what?  The audience at the Little Joe Hernandez concert I attended last weekend was almost entirely Latino.  I may not like the elective (or the officially mandated) segregation policies in Kansas City, but that doesn’t mean every music lover is racist.

As someone raised on the songs of Waylon Jennings and Willie Nelson, I take it personally when an outsider puts down any form of country.  I may prefer Colter Wall to Rascal Flatts, but it’s never occurred to me to categorically impugn the character of fans of pop-country.  Even though I often joke that lots of people like bad music, I'm won't slander those who choose to listen to sounds I deem inferior.


---
I reviewed a concert by Carrie Underwood, Maddi & Tae and Runaway June for The Kansas City Star.

---
I critique every set I caught at the Chicago Jazz Festival at Plastic Sax.

---
The audio component of my KCUR feature about Robert Castillo and the Sextet is now available for streaming.

(Original image by There Stands the Glass.)
Posted by Happy In Bag at 11:53 AM No comments:

As a white Midwestern male of humble stock, I’ve had the luxury of never needing to give much thought to my identity.  My American ancestors- a long lineage of obscure farmers, teachers and preachers- allow me to follow a path that’s largely free of expectations, obligations and encumbrances.

The results of the genetic test I recently took weren’t particularly surprising.  While it’s amusing to confirm my hunch that I’m a modern-day Neanderthal, I learned that a substantial chunk of my nuts-and-bolts are directly traceable to Glasgow.

Do my roots explain my dark disposition?  I account for ten of the 200 views of the stark solo performance of "A Keen" filmed in the home of Alasdair Roberts.  The bleak song about “the grief of a parent upon the early death of a child” is agonizing.  It could be the Scot in me that’s compelled to relish the misery.

The expanded instrumentation of the reading of “A Keen” on the Scotsman’s new album The Fiery Margin is reminiscent of Joe Boyd’s brilliant production for the likes of Nick Drake and Richard Thompson.  While based in tradition, Roberts has more in common with his Drag City labelmate Bonnie “Prince” Billy than with a typical folk purist.

My adamant rejection of the concept of historical trauma led to a heated argument with one of my children last year.  Yet Roberts’ brooding songs about uniquely Scottish forms of torment seem to stir dormant memories in my soul.  The Fiery Margin sounds so much like a home I’ve never known that I may owe my kid an apology.


---
My audio feature about Robert Castillo and his Kansas City groove-jazz band The Sextet aired on KCUR yesterday.  The sound will eventually be added to my text.

---
“Look at all the murderers and rapists here!” Joe Hernandez exclaimed as he surveyed the harmonious crowd of more than 3,000 at Fiesta Hispana last night.  The Tex-Mex legend who rose to fame as the leader of Little Joe y La Familia pilloried the President’s attacks on the Latin American community.  He asked for a moment of silence to acknowledge victims of gun violence and for “children in cages” before leading his band in a heartbreaking reading of “America the Beautiful.”  Hernandez insisted that “I know who I am and what we are- we don’t need a target on our backs.”  I captured a bit of Hernandez’s defiant “Redneck Meskin Boy”.

---
The discounted five-dollar tickets I bought for yesterday’s matinee concert by The Four Italian Tenors at the Folly Theater paid off in the form of complimentary champagne and chocolate.  The ensemble’s hammy popera was just a bonus.

---
I first saw Eddie Money at Royals Stadium in 1978.  Kansas, the Steve Miller Band and Van Halen were also on the bill of Summer Jam.  I last saw Money at the suburban festival Old Shawnee Days in 2012.  Here’s my review..  The bookends are a perfect encapsulation of the career arc of a typical pop star.  Money died on Friday.

---
The familiar sample of the Sylvers’ “Stay Away from Me” on Sampa the Great’s “Final Form” sent me down a dusty R&B rabbithole yesterday.  I discovered the bonkers “I’ll Never Let You Go”.  I’d like someone to explain the lyrics on to me.  It’s a metaphor, right?

---
You’d be correct if you suspect that I’m over the moon about (almost) everything related to this.

(Screenshot of my 23andMe’s site by There Stands the Glass.)
Posted by Happy In Bag at 8:32 AM 1 comment: 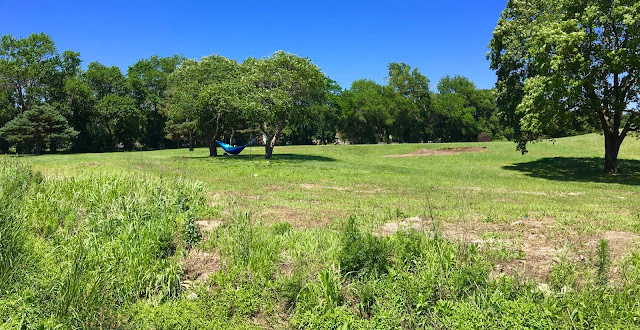 I’ve long believed that gimmicky bands and novelty albums are only embraced by people who don’t like music all that much.  Preferring comedy to music isn’t a crime, but it’s safe to say that the quality of most ostensibly funny music is criminally awful.  Monty Alexander’s Wareika Hill: RastaMonk Vibrations should be the musical equivalent of a Rastafarian dreadlock wig in a costume shop.  Yet against all odds, the album of Thelonious Monk compositions set to reggae rhythms is stupendous.  The Jamaican jazz veteran comes by the concept naturally.  Born in Kingston a year before Bob Marley, Alexander insists that he’s long harbored “a deep impression that the world of Monk and Rasta were one spirit.”  That’s why a dub reading of “Brilliant Corners” is both hilarious and moving while “Rhythm-a-Ning” sounds as if Monk anticipated reggae when he wrote the pliable melody.  Alexander demonstrates the premise in a revelatory video.

---
The first of my three-part examination of the Chicago Jazz Festival is at Plastic Sax.

---
My Brothers & Sisters was the best band I saw during the two hours I spent at the Crossroads Music Fest last week.

---
Anticipating a desperate need for a respite from jazz, I bought a ticket for this Squeeze concert before traveling to the Chicago Jazz Festival.  Chris Difford and Glenn Tilbrook were fine, but I regret the decision.

---
Earthgang’s implausible Mirrorland allows me to pretend that Outkast reunited, Prince is alive and Lauryn Hill lives in a recording studio.  Please don’t pinch me.

(Original image by There Stands the Glass.)
Posted by Happy In Bag at 11:27 AM No comments:

Cesária Évora’s burnished voice accentuated some of my happiest moments of the 1990s.  The morna sung by the Cape Verde star was an integral part of my domestic chill-out soundtrack during the Clinton era.  Évora died in 2011.  Her spirit seems to have resurfaced a continent away in the form of Daymé Arocena.  The Cuban musician performs entirely different styles of music- her wondrous new album includes jazz, R&B balladry and Santeria incantations- yet Sonocardiogram is imbued with the same sort of soulful spirituality that I relished in Évora two decades ago.


---
My Tool take: Fear Inoculum is a net positive for the world.  Here’s the title track.

---
I respect the positive vibes, constructive sentiments and jazz-steeped production on Common’s Let Love, but man, the Chicago rapper sure is corny.  Here’s “Hercules”.

---
Unpopular opinion: Sleater-Kinney’s The Center Won't Hold is excellent.  Sure, it sounds just like a St. Vincent album.  That’s a good thing.

---
I don’t know if Post Malone or the team of people tasked with keeping the gravy train rolling is responsible for the success of the project, but the highly anticipated Hollywood’s Bleeding is more than sufficient.

(Original image of a Mexican street scene by There Stands the Glass.)
Posted by Happy In Bag at 8:51 AM No comments:

Ancient to the Future 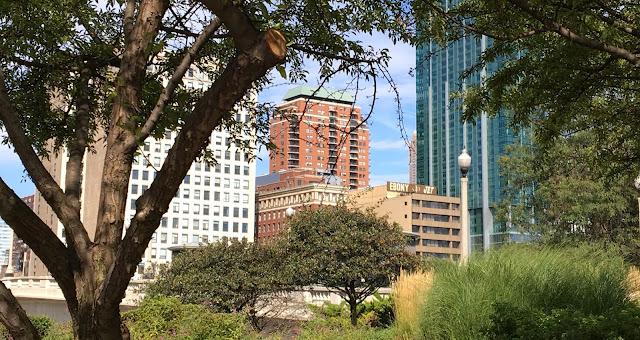 After the Art Ensemble of Chicago scrambled my DNA at the Big Ears Festival in March, I knew that catching another date on the band’s fiftieth anniversary tour was the only way to fully recalibrate my mind and body.  A Southwest Airlines flash sale allowed me to satisfy my compulsion with a minimum of financial pain on Labor Day weekend.  The Art Ensemble of Chicago was among the 30 acts I caught during the three days I spent at the Chicago Jazz Festival.  I’ll write about the curative event in detail at Plastic Sax.  In the meantime, I’m uploading clips and photos to my Instagram account.  Here’s an initial ranking of my favorite sets.


---
My most recent concert previews for The Kansas City Star are here and here.

(Original image by There Stands the Glass.)
Posted by Happy In Bag at 12:31 PM No comments: