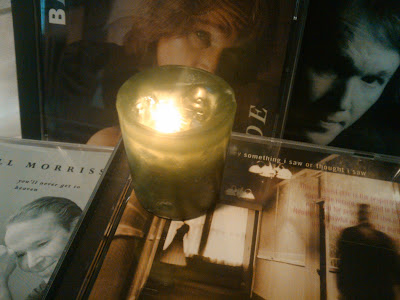 Years before I was employed by the record label, the budget-priced Rounder Folk compilation was one of the first titles I bought in the then-new CD format. The exhausted tone and cracked voice displayed on Bill Morrissey's "My Old Town" led me to believe that the man was well into his 60s. I was shocked when I discovered that he was still young. A combination of Hank Williams and Robert Frost, the New England-based singer-songwriter rarely toured in the Midwest. I saw him perform just once. His bearing at a Rounder Records convention in Cambridge made me realize that his songs about hard living were probably based on actual experience. "These Cold Fingers", for instance, details a botched marriage proposal, alcoholism, shattered ambition and shooting a debilitated dog. Morrissey died July 23. This fine appreciation of Morrissey's career provides valuable context.

There are some saints in hiding by the river in the reeds/And they're turning down every train that don't feel the right speed. Sing them this song when you pass by, it'll be your last good deed. Ah babe, it's true, the saints are down every line waiting just for you.

---
ECM's audio player for Levon Eskenian's The Gurdjieff Folk Instruments Ensemble transports me to another realm.

---
This just in- Bjork's new song sounds just like Bjork.

---
You'd think I'd love the new single by Mocean Worker. I hate it.

---
I took no pleasure in trashing Snoop Dogg's performance in my town Tuesday. Here's my review.

---
"Yoga doesn't make you invisible!" I adore The Ettes.

---
I suppose this marks the return of the "death blog," as my highly-valued friend BGO once put it. I still intend to note the recent passing of greats like Kenny Baker.

(Original image by There Stands the Glass.)
Posted by Happy In Bag at 10:26 AM 6 comments: 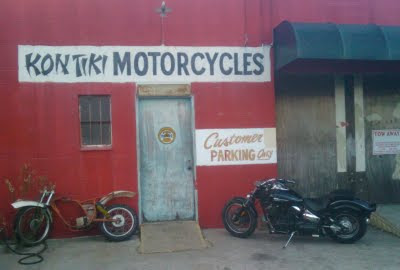 Just like most everyone I know, I enjoy Amy Winehouse's two albums. Rather than turning to Frank and Back to Black when word of her death arrived yesterday, I lamented what might have been. Had she survived, it's very likely that Winehouse would have eventually focused on jazz. It's not much of a stretch. She'd already recorded "'Round Midnight" and "Moody's Mood For Love." She could have become her generation's Anita O'Day. Who knows how many people Winehouse would have turned on to Karrin Allyson, Mildred Bailey, Gretchen Parlato, Nancy Wilson and, of course, Billie Holiday? Losing Winehouse in 2011 is awful. Speculating on a jazz-oriented career that might have peaked in 2031 only deepens the pain.


---
Yours truly can be seen handing Mega Ran a Nas CD as he freestyles at an in-store performance at Access Music in San Diego last week.

---
The nomination for the Mercury Prize brought Ghostpoet to my attention. I'm embarrassed that I hadn't given him a listen until now. RIYL: Both Gil Scott-Heron and The Streets.

---
Spotify make be clunky, but don't let its many detractors fool you- the streaming music service is a game-changer.

Dennis Winslett leads a jam session at The Blue Room on Monday.

Sade and John Legend will perform Tuesday at The Sprint Center.

(Original image by There Stands the Glass.)
Posted by Happy In Bag at 9:21 AM No comments: 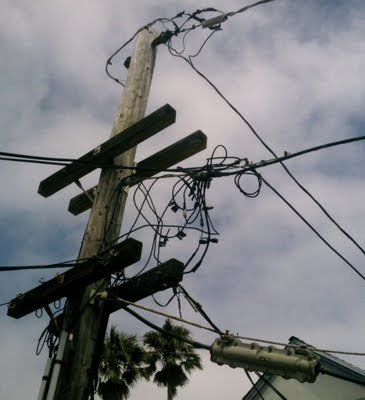 One of the revelations provided by hanging out at Turntable.fm is the depth of many people's loathing of Lil Wayne. It's not uncommon to find hip hop forums with guidelines like "Anything But That Blanking Lil Wayne." Haters gonna hate. Although I've been quick to mock Weezy's missteps, my criticism is based on disappointment rather than spite. I believe that if Wayne didn't constantly drop the "b," "f", "h," "n" and "p" words, his genius would be almost universally acknowledged. Sorry 4 the Wait, the free new mixtape that dropped last week as a stopgap until the oft-delayed Tha Carter IV is finally released is wildly inconsistent. Even so, Sorry 4 the Wait serves as yet another reminder that Wayne is head and shoulders above almost all of his peers. 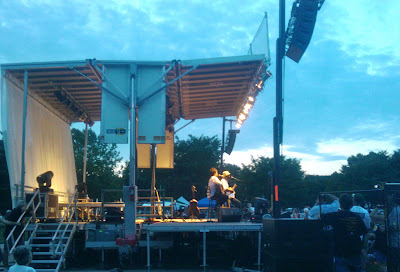 I don't mind sweating. As long as I have access to water, I actually enjoy the sensation of completely saturating my clothing. It's not much of an achievement this time of year in the Kansas City area. With the heat index over 100 last Friday evening, I headed directly to Olathe to catch Keb' Mo''s free concert at Frontier Park after mowing my lawn. Even in my dank condition, I dug the first song, a duet with opening act Kelley Hunt. I soon remembered, however, that Keb' Mo' appeals directly to James Taylor's fan base. The soft approach worked for most of the approximately 1,500 people who braved the heat, but I conceded after thirty minutes. July wins. I lose.

---
Kansas City Click: You're on your own. I'm going to get back to enjoying the cool breeze right here.

(Original image by There Stands the Glass.)
Posted by Happy In Bag at 5:13 PM No comments: 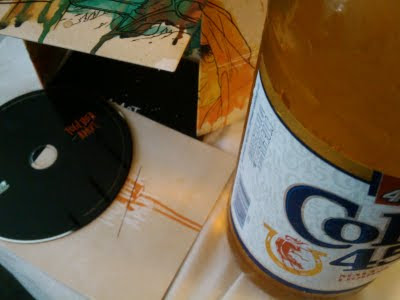 One of the toughest decisions the Warped Tour schedule forced me to make last week was whether to catch Lucero or Grieves with Budo. I went with the roots rockers. I don't regret it, but passing on the opportunity to see Grieves and multi-instrumentalist Budo in their first Kansas City-area show since they parted ways with the locally-based Black Clover label hurt. Others can make fun of so-called emo-rap all they like. I've loved Grieves songs like "I Ate Your Soul" for years. The new album Together/Apart on the Rhymesayers label contains several new favorites. Grieve's dark rhymes are good but what really makes Together/Apart work are the jazz, pop and avant-garde leanings of beat-maker Budo. I also appreciate the superior packaging.


---
Am I influential or merely prescient? Laurie Anderson and Phillip Glass have been booked at the Kauffman Center. I mentioned them as ideal candidates for the new performance space in an ill-tempered rant eight months ago.

---
The photos accompanying my review of Gomez's concert are excellent.

---
Does my interest in the new Winnie the Pooh soundtrack make me a creep?

---
I wish I connected with the music of Terri Lyne Carrington's new project.

Keb Mo and Kelley Hunt play a free show in Olathe on Friday.

Innerpartysystem appear at The Midland on Sunday.

The Fleet Foxes play The Uptown Theater on Monday.

(Original image by There Stands the Glass.)
Posted by Happy In Bag at 4:34 PM No comments: 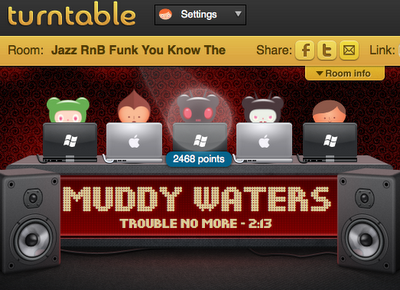 My name is Solar Compactor and I have a Turntable.fm problem.

The new social media/streaming music service is so compelling that I'm often tempted to neglect my real life obligations so that I may goof off in its digital playground. Even as I write these words, I'm actually weighing the option of staying glued to Turntable.fm instead of attending tonight's Gomez/Mike Doughty concert.

The sonic voyeurism also confirms traditional stereotypes. Jazz cats are bitter snobs. Hip hop heads are obsessed with one-upping one another on knowledge of their music's history. Indie rock fans are lemmings. Metal dudes are elitists. Even so, the opportunity to listen to and chat about Mulatu Astatke in real time seems like a dream come true.

It'd be even better with you there. I still haven't found a single forum where I can comfortably share my affection for N.R.B.Q., Ted Hawkins, Tech N9ne, Slayer, Coleman Hawkins and Asha Bhosle. Help me out.

---
I have another Warped Tour under my belt. Here's my review of Wednesday's tour stop.

---
Kansas City Click: If I'm not geeking out on Turntable.fm on Friday night, I'll be singing along to Gomez at Crossroads KC.

John Anderson will be getting wild and blue at Knuckleheads on Saturday.

Ben Folds returns to Crossroads KC on Sunday. I regret that I never saw him do this.

(Original image by There Stands the Glass.)
Posted by Happy In Bag at 10:08 AM 6 comments: 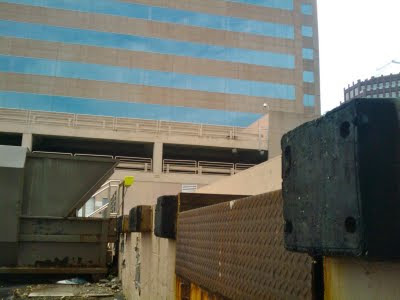 My tastes have changed considerably in the intervening years, but there was a time when each new release by record labels like Homestead, SST and Twin/Tone changed my life. Handsome Orders, the fine new album by Point Juncture, WA is a glorious throwback to those simpler times. It's jangly and arty- and it rocks. Reference points include Paul McCartney and Mitch Easter. "Baptist Jesus" even manages to sound like a mashup of Yes and R.E.M. And I'm down with any band that's willing to title a song "The Economics of Basketball."

---
I reviewed a recent performance by The Civil Wars.

---
The Jayhawks have reunited.

---
"Are you wearing underwear?" Here's an odd interview with Wayne Coyne at Love Garden.

---
Why am I attracted to videos featuring vomiting? Appetite's "Tussy" is a nausea-inducing joyride.

(Original image by There Stands the Glass.)
Posted by Happy In Bag at 2:00 PM 1 comment: