Johnny Paycheck- Wherever You Are 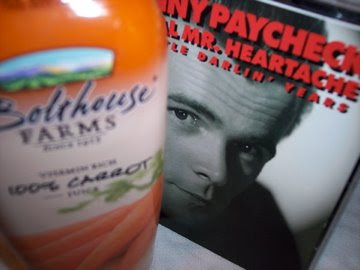 You probably already know that Johnny Paycheck was a genuine outlaw. Hits like "She's All I Got", "Colorado Kool-Aid" and of course, "Take This Job and Shove It" , are great. But in the sixties Paycheck recorded an even tougher round of songs when he worked with raconteur Aubrey Mayhew. Yesterday my pal BGO sent me Mayhew's amazing obituary. What a life! Mayhew was mixed up with everything from the Texas School Book Depository building to Charlie Parker. He also owned the Little Darlin' record label, the source of this essential compilation.

---
Have you nabbed the free download of Bob Dylan's "Beyond Here Lies Nothing"? It's good. Really good.

---
Kansas City Click: Megan Birdsall appears with Clint Ashlock at the Blue Room tonight.
Posted by Happy In Bag at 9:36 AM 5 comments:

Jeanne Lee and Ran Blake- You Go To My Head 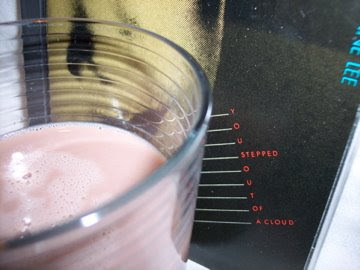 In his world-weary liner notes to an out of print 1989 release by pianist Ran Blake and vocalist Jeanne Lee, Alain Gerber suggests that jazz may become "a eulogy of itself." Twenty years later, that appears to be exactly where jazz finds itself.

I caught sixteen-year-old Grace Kelly at the Blue Room last night. (Here's my review.) The kid impressed. That said, her singing and playing lack the emotional depth that can only be acquired over time. Kelly can hardly be faulted for being young.

While I wouldn't wish a life of hard knocks on anyone, that's what it might take in order for Kelly to one day produce something as devastating as this rendition of "You Go To My Head." It's what an another area music commentator calls "grown-up music."

---
Kansas City Click: Twenty-some years ago The Blue Riddim Band was one of the best acts in town. They reunite at The Beaumont tonight.

Federation of Horsepower are on Sunday's bill at Crosstown Station.
Posted by Happy In Bag at 4:10 PM 5 comments:

Louie V- Shoot For the Moon 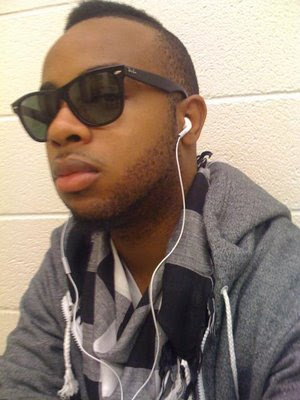 Kansas City can be an unforgiving place for rappers. There's constant pressure to reflect the appalling violence in the streets. The tragic legacies of Mac Dre and Fat Tone seem to serve as the scene's default blueprints. The racks of local retail specialists are dominated by artists that mirror the thuggish, fatalistic styles of the late rappers. That's why I'm so encouraged by the uncommon post-Kanye West approach of Louie V. "Who would have ever thought that Kansas City would be the birthplace of the best rapper alive?" Louie V boasts on "My City." It's a laughably ludicrous statement, of course, but the imagination and ambition displayed on Pronounced Five (download it at his MySpace) shows that he may get there yet. Louie V opens for Afroman at the Granada on March 28.

---
I reviewed Monday's show by Katy Perry and The Daylights.

---
MURS and Tech N9ne together? Strange but true. Check it out here.

---
In the off chance you're interested, here are the details on where I was last week.

---
Kansas City Click: Next-big-thing jazz phenom Grace Kelly appears with Greg Carroll at the Blue Room tonight.
Posted by Happy In Bag at 6:25 AM No comments: 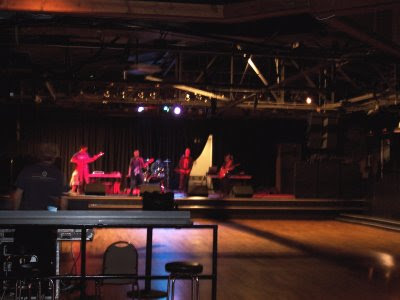 Maybe most of Kansas City's underground hip hop community was attending SXSW. Or perhaps aficionados were recovering from the previous night's Devin the Dude show at The Riot Room.

Only a handful of people caught Saturday's performance by Stik Figa. It's unfortunate- he's one of the funniest, smartest and most likable artists on the Midwest's hip hop scene. His set included "Caked Up" "The Pie," "Watchatalkinbout," "Funky Fresh" and "TwentyFourSeven." It was all good.

Stik Figa opens for Black Sheep at The Granada on March 29.

Given woefully inaccurate information by a friend about the night's schedule, I was present for Anti Crew's sound check. The song they were working out overlaid Iron Maiden-style guitar runs on a hip hop beat. I left before their proper set began.

The newly remodeled Beaumont Club is- dare I say it- sleek and stylish. The NASCAR and George Strait signage has been replaced by dark wood and contemporary lighting. The crud on the walls and in the rafters is gone. The gnarly bathrooms at the back of the room are also history.

My biggest pet peeve about the venue, however, hasn't been addressed. The stage is still very low. People stuck at the back of the room at Monday's Katy Perry show, for instance, will likely struggle to see her.

---
Kansas City Click: I've never cared for Hamell On Trial. But that won't stop me from recommending his show tonight at The Record Bar.

Katy Perry stars at The Beaumont Club on Monday.

(Original image by There Stands the Glass.)
Posted by Happy In Bag at 7:49 AM 4 comments: 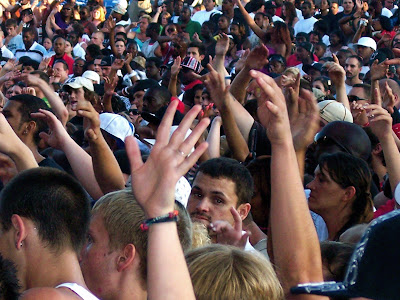 I'm taking a seasonal blogger break. While you're at SXSW, spring training or the tournaments, I'll be skylarking along what's left of "the highway that's the best." 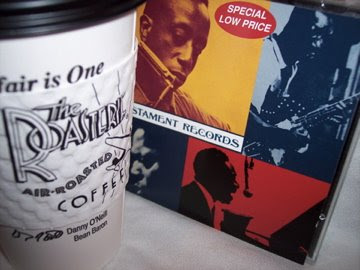 Perhaps it's time to rekindle my long-dormant love affair with the blues. As I've previously revealed in this space, I once went on a five-year blues binge. I suppose I overindulged. Or maybe I lost interest when greats like Little Hatch were replaced by Blues Hammer-style acts at my town's blues bars. Another blues legend, John Cephas, passed on last week. In the process of digging through my dusty blues vaults trying to find a Cephas track, I began listening to long-neglected compilations like this outstanding budget disc. I never did locate any Cephas but I sure am feeling Blind Connie Williams. (Tip via BGO.)

---
I reviewed Friday's triple bill of Thriving Ivory, Barcelona and Company of Thieves.

---
I took notes during last night's performance by Sara Gazarek.

---
I can't believe that I hadn't encountered this dead-on spoof of Rufus Wainwright until today. And for the record, I love the guy.

---
Kansas City Click: Miles Bonny DJs at The Phoenix.
Posted by Happy In Bag at 3:44 PM No comments:

The Life and Times- Let It Eat 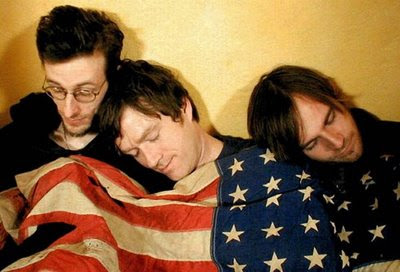 Its sound is so immense that it's difficult to imagine experiencing it at The Life and Times' familiar hometown haunts The Brick or The Record Bar. The post-punk arena rock of Tragic Boogie would be a far better fit for The Sprint Center. Barring that, it's headphone music of the first order.

The band's new album combines the arty ambition of Thrice with the ambitious pop sensibility of latter day Flaming Lips. Small, delicate touches, such as the presence of a vibraphone, makes the epic onslaught seem even heavier.

Catch The Life and Times at SXSW. The official release party for Tragic Boogie is April 5 at The Record Bar. Bring a helmet- the intimate room may explode.

---
Arvo Part's In Principio is blowing my mind.

---
Kansas City Click: The promising Company of Thieves opens for Thriving Ivory at the Midland tonight. 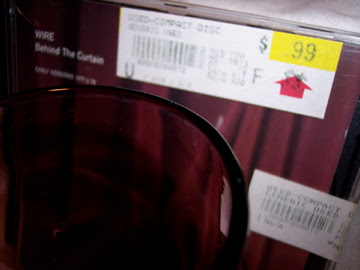 Two copies of the out-of-print Behind the Curtain are listed at Amazon. One is priced at $99.99. The other is $122.71. I paid .99 cents for my copy of the 1995 Wire compilation at a Hastings store in Hays, Kansas, several years ago. It's hard to imagine that the band featured on "Too True," a demo from 1977, would be able to do this just two years later. I'm not in the habit of selling off my collection- rare Sun Ra on vinyl excepted- but times are tough. Make me an offer.

---
Just because something happened a long time ago doesn't mean it was tasteful or tame. That's the message I attempted to convey in my review of Kevin Mahogany's tribute to Joe Turner. Even in a formal setting, Turner couldn't stop leering.

---
Here's more public self-flagellation for your amusement. My music trivia team came in third last night. Again. I failed to identify Gang Starr, Nico, and the members of the Statler Brothers. I lashed out at my teammates in frustration but I managed to refrain from heckling the host.

---
Kansas City Click: The Tards are on the bill at The Riot Room tonight.
Posted by Happy In Bag at 4:19 PM 2 comments: