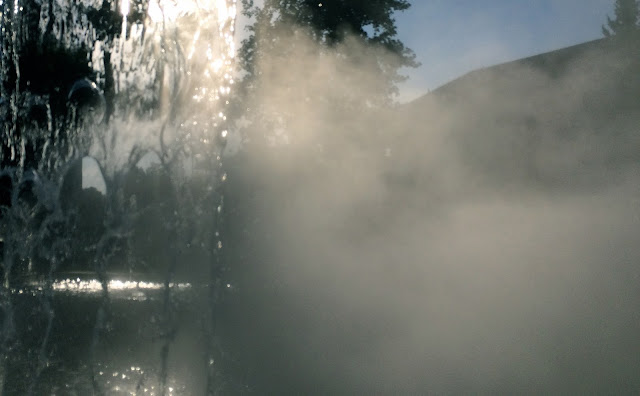 I attended Adia Victoria’s show at the Riot Room last Monday on a hunch.  While I was underwhelmed by the recordings of the Nashville based artist as I researched a preview I wrote for her Kansas City debut, I suspected that I was missing something.

My hunch paid off.

I was one of about three dozen people in attendance for what’s certain to be one my favorite performances of 2016.  Backed by an impressive band of Nashville cats, Victoria prowled the stage like the feral grandchild of Howlin’ Wolf and Dolly Parton.

Victoria repeatedly suggested that she was playing the blues.  Accordingly, a noisy cover of Robert Johnson’s “Me and the Devil Blues” was my favorite selection.  She was entirely credible as she insisted that she was going to “beat my man until I’m satisfied.”

I was so gobsmacked that I failed to take a decent picture.  Fortunately, Todd Zimmer documented the show with a remarkable set of photos.


---
I reviewed of a new collection of 58 previously unissued Charlie Parker tracks for KCUR.

---
I reviewed a concert by Duran Duran, Chic and Tokimonsta.

---
I reviewed a concert by Shinedown, Halestorm and Black Stone Cherry.

---
I talked up Rooftop Vigilantes on KCUR last week.

---
The last 132 Hastings stores have been shuttered.  I spent a significant portion of my life in Amarillo soliciting the buyers of the once-powerful chain.  By and large, my contacts at the Hastings headquarters were good folks.

---
I’m all about Revocation’s Great Is Our Sin.  RIYL: Exmortus, metallic hooks, Lamb of God.

---
The unfortunately named Dinosaur exemplifies the look and sound of modern jazz.  (For the record, I dig the London ensemble.)

---
Many readers of There Stands the Glass are vocal advocates of Goat.  Requiem, the band’s new album, will be released in October.

---
The things I liked about Z-Ro’s purple-drenched Houston rap are largely absent on Drankin’ & Drivin’.  Z-Ro knows it.  He raps “if you don’t like my new sh*t you can go back to my old sh*t… gotta get this money, man.”  RIYL: 2Pac, the slickness, UGK.  Here's "My Money".

(Original image by There Stands the Glass.)
Posted by Happy In Bag at 1:37 PM 1 comment: 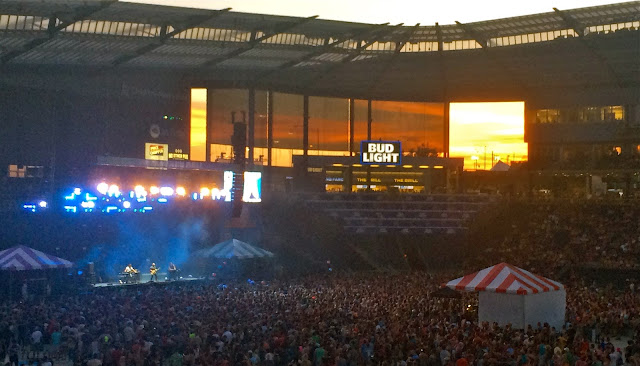 My social media feeds are clogged by heartfelt confessions inspired by recent events.  In that spirit, I’ll reveal one of my deepest prejudices: I involuntarily roll my eyes when I spot a dude in a Red Hot Chili Peppers t-shirt.  My eye muscles get a workout at almost every non-classical concert I attend that attracts a throng of white guys.  I’m not sure why the fashion choice bugs me.  I’ve always been down with the band.  Like the members of RHCP, I fell under the spell of George Clinton while attending high school in the 1980s.  I admire much of RHCP’s work, including the new Danger Mouse-produced The Getaway.  Come to think of it, maybe I should buy one of those shirts the next time I’m at Target.


---
I reviewed Trampled Under Foot’s marathon reunion show at Knuckleheads on Friday.  I also highlighted the concerts on KCUR last week.

---
I reviewed the first day of the Buzz Beach Ball festival at Children’s Mercy Park.  I also wrote an extended preview of the event for The Kansas City Star and Ink magazine.

---
Alan Vega of Suicide has died.

---
I’m happily stuck in the quagmire of Rich the Factor’s Smile.

---
I’m still over the moon about catching a performance by trumpeter Kirk Knuffke a couple weeks ago.  Fierce Silence, his new duet album with drummer Whit Dickey, is nice and skronky.

(Original image of Buzz Beach Ball by There Stands the Glass.)
Posted by Happy In Bag at 1:49 PM No comments: 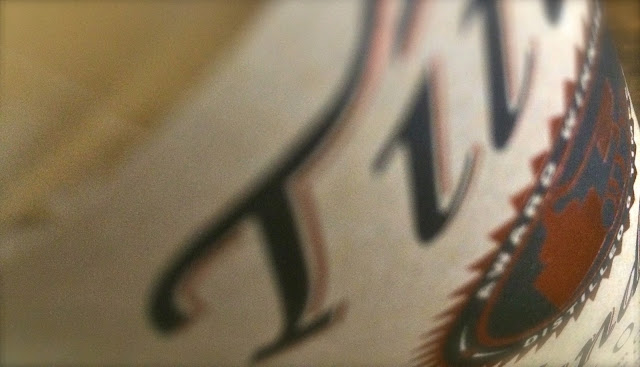 I grew increasingly frustrated as I watched Mark Chesnutt perform with Lorrie Morgan and Joe Diffie at the Kauffman Center for the Performing Arts in January.  My subsequent review was positive, but I longed to be transported to a proper Chesnutt concert at a honky-tonk in his home state of Texas.

Rather than gripping a notepad and a penlight, I wanted to hold a longneck in one hand and the waist of my dance partner in the other.  My daydream of careening across a dance floor to “Brother Jukebox” was heavenly.

Tradition Lives, Chesnutt’s first album in six years, is filled with sturdy country songs about drinking, cheating and heartbreak.  “So You Can’t Hurt Me Anymore,” an ode about a breakup with booze, is my favorite track.

The veteran traditionalist has no use for crossover pop moves or for the sort of arty innovations that made Sturgill Simpson a sensation among the NPR set.  Yet formalism doesn’t seem stodgy in the hands of Chesnutt.  I favor hip-hop, jazz, metal and R&B these days, but hardcore country like Tradition Lives will always sound like home to me.


---
I reviewed Twenty One Pilots’ sold-out concert at the Sprint Center.

----
I wrote an extended preview of Flight of the Conchords’s show at Starlight Theatre for The Kansas City Star and Ink magazine.

---
I continue to drive the Matt Otto bandwagon at Plastic Sax.

---
If I manage to embrace the distortion that makes speakers sound as if they’re blown out, Mike Dillon’s Functioning Broke might become one of my favorite jazz-based albums of 2016.  RIYL: Steve Reich, Elliott Smith covers, early Keith Jarrett.

---
I get choked up by Allen Toussaint's cover of Paul Simon’s “American Tune” at the conclusion of his lovely posthumous album American Tunes.

---
In 2014, I suggested that Schoolboy Q's Oxymoron resembled "a poor man's version of Kendrick Lamar's good kid, m.A.A.d city."  The rapper's new  Blank Face LP sounds like a bankrupt response to To Pimp a Butterfly.  The project also has the dubious distinction of housing “That Part”, arguably Kanye West’s worst-ever feature.

---
The messy mix on the reissue of Van Morrison’s ...It’s Too Late to Stop Now doesn’t spoil the fun.

---
Hiromi’s Spark is RIYL: bombast, Rush, being buried by notes.

---
At his best, Kenny Garrett is among the most essential living jazz musicians.  He’s astoundingly awful at his worst.  Do Your Dance! runs the gamut.  RIYL: John Coltrane, embarrassingly amateurish cover art, middle school talent shows.

(Original image by There Stands the Glass.)
Posted by Happy In Bag at 11:14 AM No comments: 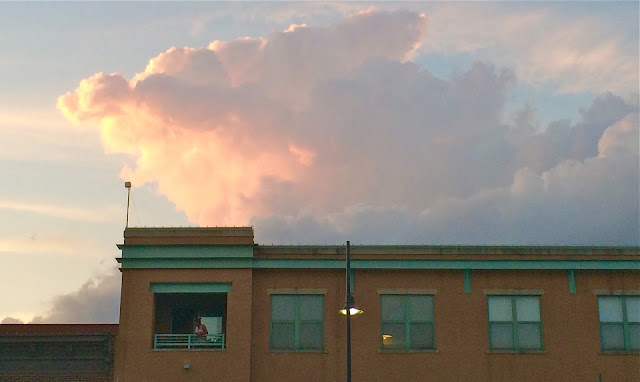 I recently selected Kandace Springs’ Soul Eyes as background music in an attempt to establish a romantic mood on a date with my life partner.  I’d hoped for smooches.  Instead,  I was mocked for my taste in music.  My Anita Baker-loving spouse found Soul Eyes syrupy and overly sentimental.  Her analysis may be valid, but I just can’t help myself.  Springs’ languid album is in the sophisticated supper club tradition of Nancy Wilson and Donny Hathaway.  I’m entranced.  Here’s Springs’ interpretation of Shelby Lynne’s ”Thought It Would Be Easier”.


---
I still don’t understand why my forthright review of the Dave Matthews Band’s concert in Bonner Springs is controversial.

---
I admired Brewer & Shipley on KCUR’s Up To Date program last week.

---
I wrote an extended preview about Brand New for The Kansas City Star and Ink magazine.

---
I reported on Bobby Watson’s participation in the Black Archives’ Community Stories series at Plastic Sax.

---
Rob Wasserman has died.  The bassist last performed in Kansas City in 2014 with Bob Weir’s Ratdog.  His 1989 appearance at Memorial Hall as a member of Lou Reed’s band was probably the first time I saw him perform.

---
Maxwell’s BLACKsummers’night was my favorite album of 2009.  I’m not sure that blackSUMMERS’night is worth the seven-year wait.  The new release is merely very good.  RIYL: Marvin Gaye, soul giants, Prince.  Here’s ”Gods”.

---
Marquis Hill bested Kansas City’s Hermon Mehari in the the 2014 Thelonious Trumpet Competition.  The eclectic The Way We Play indicates that Hill a formidable talent.

---
I get inordinately excited every time the words “jazz” and “punk” are commingled.  I’m invariably disappointed.  I don’t care for Melt Yourself Down’s Last Evenings On Earth.

---
The first set of Allison Miller’s Boom Tic Boom at the Blue Room last week was one of the most exciting things I’ve heard in 2016.  I posted a clip to Instagram.

(Original image by There Stands the Glass.)
Posted by Happy In Bag at 9:55 AM No comments: