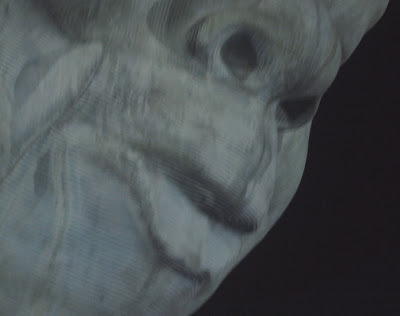 In a candid interview with the Village Voice, Charles Gayle refers to portions of his approach on the new album Streets as "paint-peeling" music. When I worked in record stores, I called the sound "room-clearing." It's funny, though, because I find Streets not just bracing, but remarkably soothing. Sure, it's "out", but anyone who's accepted Albert Ayler, Ornette Coleman and John Coltrane shouldn't be intimidated by Gayle's ferocity or spiritual inspiration. Streets is a strong candidate for the #BAM, gospel, folk or jazz album of 2012.


---
I reviewed Benny Golson's appearance at the Blue Room on Saturday.

---
I recently happened upon the documentary Music By Prudence. Watch it if you need a bit of inspiration.

---
Anyone who's been to an "active rock" concert in the past dozen years knows that a sincere acknowledgement of men and women serving in the military is a part of the ritual. The video for Black Stone Cherry's "In My Blood" takes it one step further.

---
Kansas City Click: I'd like to be at the Westport Coffee House on Monday, Knuckleheads on Tuesday, the Beaumont on Wednesday and Sprint Center on Thursday. 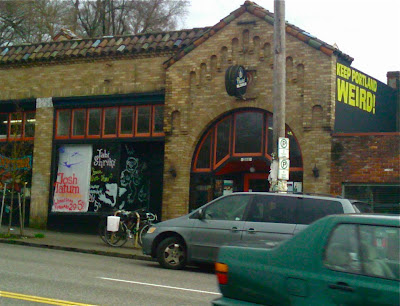 What if Napster never happened? I was stunned when I walked into Music Millennium last weekend. The longstanding Portland music retailer was filled with eager customers and enthusiastic clerks. The shelves overflowed with vinyl, compact discs and music-related tchotchkes. It was as if digital downloading didn't exist. I hadn't been in such a vibrant record store in over a decade. Even so, the store's Terry Currier keeps it real in a recent interview. (Full disclosure: I was once employed by a company affiliated with Music Millennium.)

---
Here are my notes on an Enrico Rava concert I attended in Portland. Please let me know if you have any clue as to why Plastic Sax commenters are so spiteful.

---
The new album by the Brody Buster Band is shockingly good. Here's my review.

---
I can't make up my mind about the quality of Matt Wilson's Arts & Crafts' new An Attitude of Gratitude album. That's probably a good sign.

---
I recommend the video for Wooden Wands' "Winter In Kentucky" to fans of Jimmy Dale Gilmore, Aldi and record stores.

---
Carolin Widmann and Alexander Lonquich? Yes, please. I'm not sure why, but this stuff really resonates with me right now.

(Original image of Music Millennium by There Stands the Glass.)
Posted by Happy In Bag at 4:06 PM 1 comment: 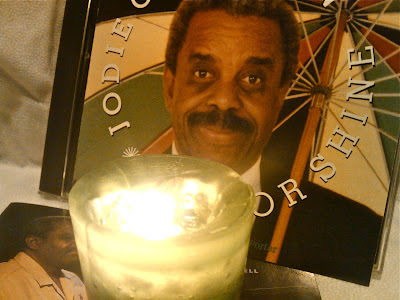 Dear Diary- I was saddened to learn of the death of Jodie Christian a couple days ago. Yet I can't help but smile at a memory his name evokes. Back when flying was easy and I accumulated Southwest Airlines travel vouchers like a champion, I regularly spent my weekends in Chicago. My friend Duane suggested we take our dates to Pops for Champagne. It worked for me- watching jazz pianist Christian perform just five feet away thrilled me. I let Duane, a regular at the venue, order the first bottle of champagne. Midway through the third bottle, Duane and his date left. "Don't worry Duane, it's my treat- thanks for suggesting this great place." My giddiness ended when the check arrived. Unbeknownst to me, we'd been sipping on $100 bottles. Christian was wonderful, though. His work for Delmark is very fine.


---
I have no regrets about seeing Roy Ayers instead of Craig Finn last Saturday, but this footage from the Record Bar is pretty great.

---
I learn a lot from Marc Myers' Jazz Wax blog. The photo that opens this entry solves a longtime mystery for me.

(Original image by There Stands the Glass.)
Posted by Happy In Bag at 7:26 AM No comments:

The Star Maker Machinery Behind the Popular Song 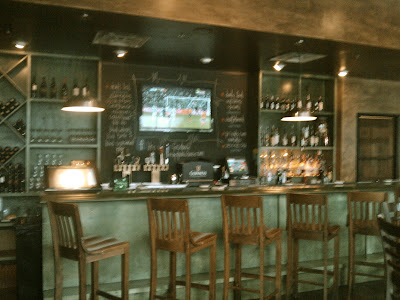 I listened to a conservative talk show host during my commute Monday morning. (I know.) She blamed the recent death of a prominent pop star on "cultural degradation." That's dumb. Against my better judgement, I'll share my theory. A close friend died last year. I consider his passing the culmination of a twenty-year-long suicide. He was unwilling to break free from the expectations that had been forced upon him. He dealt with his internal conflict in an unhealthy manner. I sense that the pop star may have been just like my friend. It's heartbreaking that neither was able to reject the pressure to fulfill false obligations.

---
I consider the new venue at Kansas City Academy at Plastic Sax.

---
Brother Ali dropped a free new 27-minute EP today. It's not his best work, but hey, the price is right.

---
Rich the Factor's social media feed slays me. Here's a recent sample: I broke my MFR bracelet last nite cancoonin too hard one love to moms at town topic for the burgers yeah no bodyguards hangn out til 4 tho

---
I like the feel of the new video from She's a Keeper.

---
Kansas City Click: I don't know if the booking of the Pretty Things Peep Show at the Beaumont Club on Valentine's Day is pure genius or a train wreck in the making.

Does loving Psychostick's "Girl Directions" make me a horrible person? The band appears at the Beaumont Club on Wednesday.

The Features return to the Record Bar on Thursday.

(Original image by There Stands the Glass.)
Posted by Happy In Bag at 5:32 PM No comments: 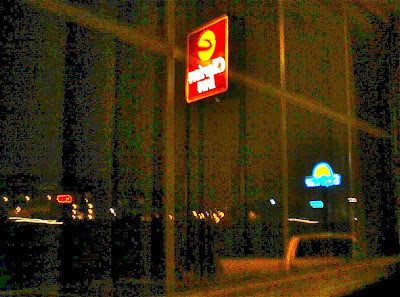 Until I witnessed its incredibly sensitive yet thoroughly dynamic performance backing the legendary Daniel Johnston at the Middle of the Map festival in 2011, I dismissed Capybara as an irredeemably slight ensemble. Cute and cuddly aren't qualities I admire in a rock band. I'd written Capybara off as soft.

Capybara's ability to inspire the best Johnston performance I've witnessed changed my perception of the band. That explains why I'm so uncharacteristically smitten by Dave Drusky, the Kansas City band's new album. The delightfully disorienting project could be mistaken for a clever remix of isolated tracks from the recent deluxe reissue of the Pet Sounds sessions.

Dave Drusky's wispy dream pop is unflaggingly pleasant. Even when it musters energy on "Black Apollo Rain," the band's rock is tastefully understated. "Bill Dabbler, Lorn Line" could be the theme song for a children's cartoon. And the fact that one selection is titled Pierre Bensusan is the fulfillment of a music geek's fantasy.

Given my affinity for the music of the French guitarist, I should have already understood that soft and mellow are entirely different things.


---
I admired Put Your Back N 2 It, the fine new album by Perfume Genius, even before I saw the wonderful video for "Hood." Amazing.

---
I fail to hear how Sharon Van Etten's Tramp is substantively different than Adele's 21. Why is it considered "indie" by tastemakers who dismiss Adele as a mainstream act? That said, while I like both Adele and Van Etten, I continue to prefer Cat Power's The Greatest.

---
Mac Lethal is offering digital copies of the first six volumes of his Love Potion projects- 85 tracks in all- for $10 at Bandcamp.

---
Van Halen's new album is an actually halfway decent listen if you like stoopid party rock. And I do. The best bits sound like Who Are You-era The Who.

---
I discovered the genius of Nico Muhly this week.

---
Chad Kassem of Acoustic Sounds is one of my heroes.

Review: Vivica Genaux and Europa Galante at the Folly Theater 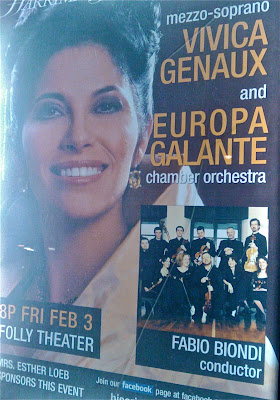 My knees are still weak days after attending Friday's concert by Vivica Genaux and Europa Galante. It's not just the nonexistent leg room in the balcony of the Folly Theater that made me wobbly. I'm still swooning from the intoxicating combination of the vocalist's superb voice, sultry visage and sublime accompanists.

It looked like this but it sounded as good as any concert I've experienced. No amplification was employed in the high-ceilinged hall. I could distinguish every note played by the 14-piece Italian ensemble. I caught glimpses of God during Concerto for 2 violins Op 3 Nº 8 RV 522.

I loved much of the live jazz and metal I've already witnessed in 2012, but Friday's concert is the one to beat.

---
What did I think of the halftime show at the Super Bowl? Thanks for asking. Just the mere idea of the trio of Madonna, M.I.A. and Nicki Minaj being broadcast into tens of millions of homes around the world strikes me as remarkably subversive.

---
I recently listened to Sun Ra's Magic City for the first time in over a decade. It's unfortunate the legend sometimes gets in the way of the music. This stuff is absolutely brilliant.

---
I returned to the Folly Theater on Saturday to catch Phil Woods and Grace Kelly. Here are my notes.

---
Kansas City Click: It's my understanding that Stacy Barthe opens for Estelle at the Riot Room on Monday.

Everette DeVan plays at the Phoenix on Tuesday.

Max Justus is among the acts performing Thursday at the Record Bar.

(Original image by There Stands the Glass. I didn't dare try for an in-concert photo. Sure enough, Genaux sternly scolded a shutterbug during the show.)
Posted by Happy In Bag at 5:44 AM No comments:

Review: Icons Among Us 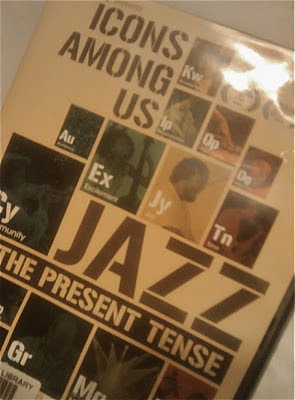 I flipped my lid when I stumbled across a copy of Icons Among Us: Jazz in the Present Tense at my local library. I'd been eager to see the documentary for a couple years. Alas, it wasn't quite as definitive as I'd hoped. Some of the footage that had piqued my interest in various clips at YouTube didn't make the cut. (The material is presumably available on the deluxe edition.) And the finished product seems disjointed- it skips about randomly. My favorite bits include Donald Harrison creating a symphony with just his voice and a bucket on his front porch in post-Katrina New Orleans, Terence Blanchard's scathing insights, Bugge Wesseltoft's excellent performance and the opportunity to hear Courtney Pine speak for the first time. As anyone familiar with Plastic Sax already knows, I subscribe to the film's assertion that there's no shortage of essential jazz #BAM being played today even if hardly anyone is listening. Here's an eight-minute trailer for the film.


---
F*cked Up and Mission of Burma are the acts that have me excited about the 2012 edition of the Middle of the Map festival.

(Original image by There Stands the Glass.)
Posted by Happy In Bag at 10:42 AM 4 comments: