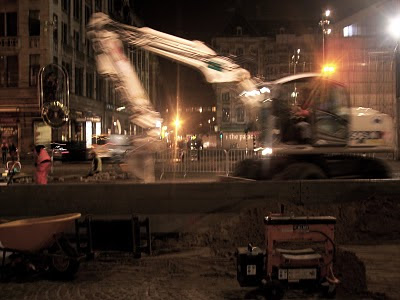 I'll take credit for being the first to make the connection- Nicholas Payton's Bitches is the jazz equivalent of Wilco's Yankee Hotel Foxtrot.

Both albums were rejected by the artist's record labels. And both projects represented major stylistic departures. Just as Yankee Hotel Foxtrot was not the expected roots-rock album, Bitches is not a mainstream jazz recording. As "By My Side" and "Shades of Hue" indicate, Bitches contains the sort of contemporary psychedelic R&B associated with Erykah Badu, Bilal and Maxwell. The top ten lists in the column to the right show that I already adore that sound.

It's been noted elsewhere that the project was initially inspired by Miles Davis' Bitches Brew. I was unaware of these sessions when I attended Payton's odd appearance at the Rhythm & Ribs festival last October. In my notes about the event at Plastic Sax, I drew comparisons to Davis' On the Corner and Stevie Wonder's Fulfillingness' First Finale. Bitches affirms that impression.

At 74 minutes, it's a sprawling mess. As with the genre's greatest album, however, even Bitches' flaws sound right. Bitches is brilliant.

---
Why yes, I am excited about Amazon's sound cloud. Thanks for asking.

---
Here's the schedule for next week's Middle of the Map festival. My festival band of the week is the mysterious Candy Claws. It's typical of Middle of the Map's emphasis on electronic dream-pop.

---
Kansas City Click: Foster the People will play "Pumped Up Kicks" Thursday at the Beaumont.

Benny Golson will be honored at the Blue Room on Friday.

Joe Lovano leads a band Saturday at the Folly Theater.

The Dramatics top Sunday's bill at the Beaumont.

(Original image by There Stands the Glass.)
Posted by Happy In Bag at 12:30 PM 3 comments: 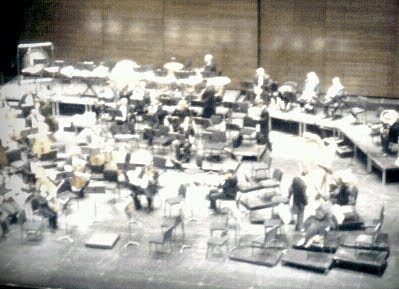 "Such soothing music!" a misguided patron exclaimed as he strolled out of the Lyric Theater on Saturday. The performance by the Kansas City Symphony could be characterized as inspiring or stimulating, but calling it soothing was an unintended insult to the musicians and composers. Elgar's Enigma Variations didn't do anything for me but Ravel's G Major Piano Concerto provided a wild ride. Ingrid Fliter, the featured pianist, was charming. Although I'm still in search of the mythical $10 Symphony ticket, at $16, Saturday's rush tickets still represented a steal.

---
I love whatever's happening on track #10 of The Lost and Found, Gretchen Parlato's new album.

---
In spite of its patronizing tone, a recently uncovered 1956 documentary about the music of a Southern sharecropper is worth the attention of roots music fans and students of American history. (Via Marc Meyer's Jazz Wax.)

---
My friend Corky alerted me to this exciting development.

(Original image by There Stands the Glass.)
Posted by Happy In Bag at 8:29 AM No comments:

The Gruesome Return of the Death Blog 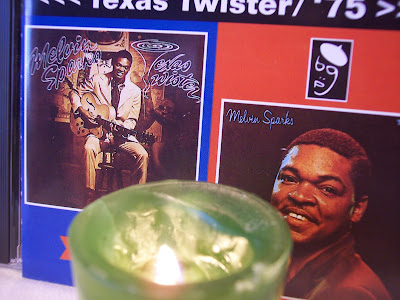 I visited the grave of Serge Gainsbourg in Paris last week. I'm attending a funeral in western Kansas tomorrow. Rather than allowing the long list of music-related deaths to paralyze me, I'll simply list them.

---
Have I mentioned that I love Alison Krauss? I'm looking forward to her new album.

---
I recommend Pusha-T's Fear of God free mixtape to fans of the Clipse, N.E.R.D and Odd Future.

---
Could "Into the Spin" be the video that makes Doomtree's Dessa a star?

---
Hidden Pictures is critiqued by a drunk guy.

Trio Mediaeval return to the Cathedral of the Immaculate Conception on Saturday.

The Trashcan Sinatras perform at Knuckleheads on Sunday. 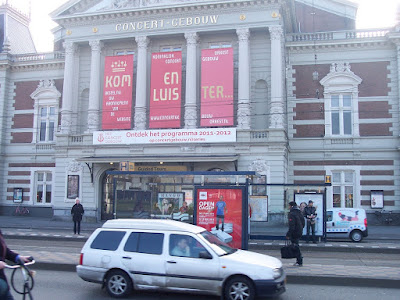 That's the Concertgebouw. I admired it during my recent trip to Europe but I didn't attend a performance at the venerable hall. A few excellent buskers aside, I haven't heard any live music in two weeks. Instead, I've been subjected to almost nothing but trifling pop music at grocery stores, cafes, shops and on public transport in Belgium, the Netherlands and France. I never need to hear Alison Moyet again.

---
The Mumlers headline the late show at the Record Bar on Tuesday. I'll probably be there.

(Original image by There Stands the Glass.)
Posted by Happy In Bag at 6:54 AM 2 comments:

Down the Road a Piece 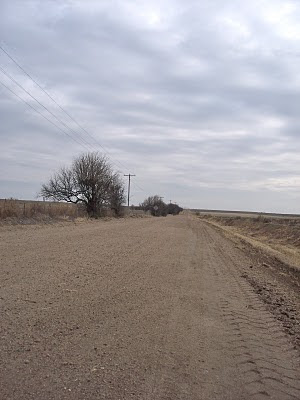 There Stands the Glass' usual shenanigans will resume later this month. Until then, I'll be "Down the Road a Piece".

(Original image by There Stands the Glass.)
Posted by Happy In Bag at 3:03 PM No comments: 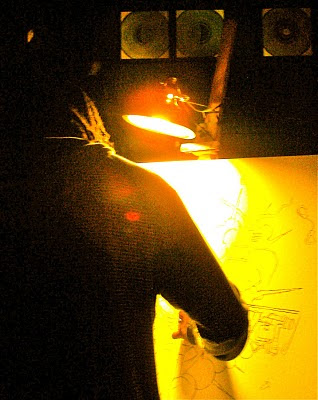 What Happened Tomorrow, the compelling new mixtape by Steddy P. and DJ Mahf, is more of the same. As with the duo's previous projects, it's smart, funny and highly entertaining.

Available as a free download March 15, What Happened Tomorrow showcases the young Missouri-based musician's stubborn old-school mentality. Steddy P.'s delivery and mindset continue to invite comparisons to Chuck D. It's also telling that he references KRS-One on "Heartbeat." The primary subject of What Happens Tomorrow is the artist's career in music. Sure, it's annoying, but when it comes to free mixtapes, self-obsession isn't just a prerogative, it's practically an obligation.

Steddy P.'s not-so-secret weapon is DJ Mahf. Even when his partner's rhymes falter, Mahf's musical choices maintain interest. The album opens with a muted Manu Dibango-style track. In order to keep copyright attorneys off the duo's backs, I won't mention what clever rock sample is heard on "The Art of..."

On "By Myself," Steddy P. describes his struggle to establish himself "in a town where everybody wants to be the Killer Clown," Even if Steddy P. has yet to achieve a fraction of Tech N9ne's financial success, his ongoing efforts continue to reward listeners.

---
Johnny Preston- "Running Bear" and "Cradle of Love"- has died. (I hadn't realized that the Big Bopper wrote "Running Bear.")

---
Get a taste of the ethereal new album by Trio Mediaeval here.

---
I continue to stir the pot at Plastic Sax.

Am I actually recommending a Vertical Horizon show? Yeah, but the band's gig Wednesday at the Power & Light stage is free.

Kris Kristofferson and Merle Haggard sing songs you know by heart Thursday at the Music Hall.

(Original image of artist at a 2010 Steddy P. and DJ Mahf performance by There Stands the Glass.)
Posted by Happy In Bag at 6:10 AM No comments: 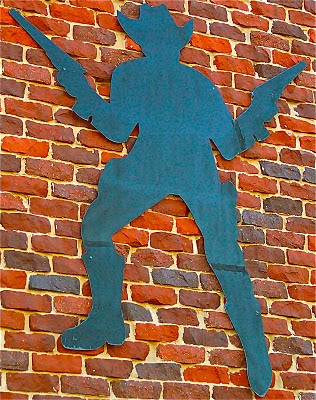 Never once have I fantasized about being a famous musician. The lovably ramshackle acoustic music of The Water Tower Bucket Boys, however, makes me want to grab a mandolin and jump on a train. Sole Kitchen (available now from CD Baby and at other outlets on April 26) is that ingratiating. The Portland-based band probably isn't any better than the Bad Livers, the Hackensaw Boys or Split Lip Rayfield, but I adore Sole Kitchen's songs about bread ("tastes just like my honey's bun!"), the quality of smoke in Berkeley and drinking so much whiskey that you "pass out on the hot, dusty ground." And anyone familiar with my loathing of rodents can imagine my delight with "Blackbird Pickin' at a Squirrel." Where's my knapsack?

---
I enthusiastically reviewed Kasey Anderson's Heart of a Dog in January. He recently recorded a Daytrotter session. It's really good.

---
My Middle of the Map festival band of the week is Paper Route.

---
The Jacob Fred Jazz Odyssey recently worked with a few all-star horn players. This excites me.

---
Art Brut never fail to make me laugh. Among the songs on its forthcoming album Brilliant! Tragic! are "Clever Clever Jazz" and "Is Dog Eared."

Glen David Andrews celebrates the advent of the holiday season Monday at the Blue Room.

(Original image by There Stands the Glass.)
Posted by Happy In Bag at 10:19 AM No comments: 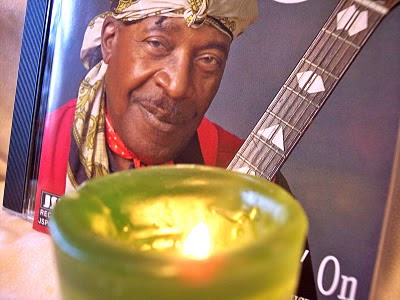 Although Eddie Kirkland was 87 when he passed away a couple days ago, he didn't die of old age. A horrific car accident killed him. The life of the former musical partner of John Lee Hooker was full of such unlikely surprises. For starters, he was born in Jamaica. Kirkland toured with Otis Redding in 1964. Backed by Foghat, he performed on Don Kirshner's nationally televised "Rock Concert" with Foghat in 1977. (Drop everything and watch the amazing footage now.) He recorded several solid albums during the blues revival of the '80s and '90s, including this minor gem for the JSP label.

---
I analyzed Operation Long Leash, the new album by the Dead Kenny Gs, at Plastic Sax.

---
I was privileged to hear Héctor Del Curto and Gustavo Casenave perform with the Bach Aria Soloists last weekend. Here's my review.

---
Rick Ross's recent concert was a fiasco. Here's my review.

---
I regularly mock "tasteful" albums that seem as if they're made specifically with NPR in mind. But darned if I don't love Lagrimas Mexicanas, the new collaboration between Vinicius Cantuaria and Bill Frisell.

The Beaumont Club hosts The Dropkick Murphys on Wednesday.

The Sons of Brasil play Jardine's on Thursday.

(Original image by There Stands the Glass.)
Posted by Happy In Bag at 7:08 AM No comments: