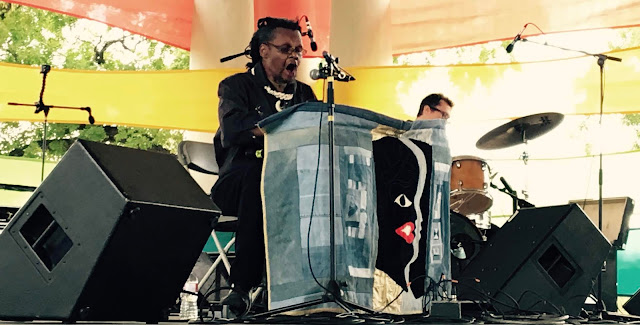 (Original images by There Stands the Glass.)
Posted by Happy In Bag at 9:31 AM No comments: 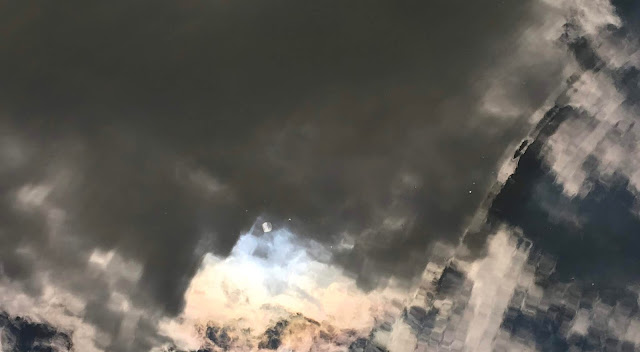 I once thought Blood Orange was exceedingly overrated.  The music made by the lionized auteur Devonté Hynes finally catches up to the breathless hype on Negro Swan, one of the most engaging alternative R&B albums to be released in the wake of Frank Ocean’s game-changing 2012 masterpiece Channel Orange.  Negro Swan’s glossiest songs could be psychedelic remixes of George Michael’s biggest hits while less structured tracks sound like spontaneous late-night D’Angelo jams.  The spoken word interludes about sexual politics and gender identity don’t address concerns of immediate interest to me, but the passages provide effective transitions between the stylistically disparate selections.  Here’s “Jewelry” and “Saint”.


---
I reviewed Billy Joel’s concert at Kauffman Stadium for The Kansas City Star.

---
I slam everything in an irritable Plastic Sax post.

---
Good Lord!  The deep 1980s funk on the Dur-Dur Band compilation Volume 1, Volume 2 & Previously Unreleased Tracks saved my soul the other day.  Not even the atrocious sound quality spoils my appreciation of the uplifting music that seems to be based equally on the (Jamaican) Wailers and indigenous African styles.  (Tip via Big Steve.)

---
The Near East Quartet achieve one of the rarest feats in jazz with “Jinyang”: the creation a compelling music video.  The South Korean group’s ECM debut is imbued with similarly originality.

---
“The Gypsy Faerie Queen”, a new song by Marianne Faithfull and Nick Cave that “exists in the twilight in-between,” is almost more than I can bear.

(Original image by There Stands the Glass.)
Posted by Happy In Bag at 9:28 AM No comments:

Song Review: Ambrose Akinmusire's “a blooming bloodfruit in a hoodie” 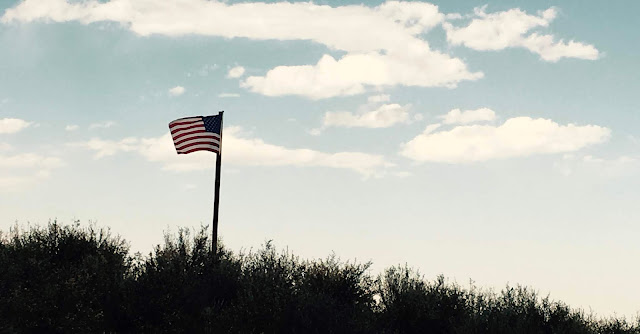 Ambrose Akinmusire’s validation of my hot take on his new song “a blooming bloodfruit in a hoodie” gratified me last week.  Minutes after I suggested that the “essential new ‘a blooming bloodfruit in a hoodie’ is the jazz equivalent of Lou Reed’s monumental ‘Street Hassle’” on Twitter, Akinmusire affirmed the assessment.  Like “Street Hassle,” the coarse 13-minute track is simultaneously funny and tragic as it fluently merges high art and popular music.  The opening selection from the forthcoming album Origami Harvest is one of the most exciting things I’ve heard in 2018 and reinforces my belief that Akinmusire is one of the most vital artists of the new millennium.

---
I reviewed the Count Basie Orchestra’s new album All About That Basie at Plastic Sax.

---
I’d be lying if I suggested I was a fan of Mac Miller.  Even so, his recent Tiny Desk Concert featuring a band that includes Thundercat and Justus West showed Miller evolving toward a musical direction that appeals to me.  Miller died last week.

---
Maartin Allcock of Fairport Convention and Jethro Tull has died.  (Tip via BGO.)

---
Katherine Paul, the woman behind Black Belt Eagle Scout, is less heralded than many of her similarly winsome indie-rock peers, but I prefer her album Mother of My Children to most of the more acclaimed efforts.  Here’s “Indians Never Die”.

---
Rich the Factor makes a cameo appearance on Rico, the new album by the ostensible drug kingpin and rapper Berner.  Chronixx, Cam’ron and Kevin Gates are also featured.  Here’s the title track.

---
Most people think I’m kidding when I tell them I adore Ariana Grande’s recent music.  Maybe they’ll come around to my way of hearing things after they take in the pop star’s interpretation of Thundercat’s “Them Changes.”

(Original image by There Stands the Glass.)
Posted by Happy In Bag at 1:04 PM No comments:

Concert Review: The Bang on a Can All-Stars and the Kansas City Chorale at the Folly Theater

The most prestigious offering of Open Spaces was an artistic triumph and an attendance disaster.  About 100 people showed up for the ambitious collaboration between the Bang on a Can All-Stars, one of New York’s most decorated new music ensembles, and the four-time Grammy Award recipients the Kansas City Chorale at the Folly Theater on Thursday.  Tickets to the Kansas City premiere of “Anthracite Fields”, the oratorio about coal miners that won the 2015 Pulitzer Prize for Music, were only $20.  The dismal turnout for the once-in-a-lifetime event at the venue with more than 1,000 seats was almost certainly the smallest showing for either acclaimed group in years.

Bang on a Can clarinetist Ken Thomson didn’t bother to use a microphone when he told the small gathering seated near the stage that his group had rehearsed with the Kansas City Chorale the previous two days.  The preparation paid off.  Conducted by the Chorale’s Charles Bruffy, the rendering of “Anthracite Fields” was magnificent.  Bruffy’s 27-member group excelled in the uncharacteristically adventurous context.  A melding of classical, rock and folk elements, “Anthracite Fields” is a sonically jarring but emotionally compelling work.  Composer Julia Wolfe grinned broadly as she was rewarded with a standing ovation at the conclusion of the evening.

Bang on a Can opened the concert with interpretations of two similarly engaging pieces.  Described in the glossy 20-page program for the concert as “an exploration into the use of video to create a framework in which live music can develop,” a madcap reading of Christian Marclay’s “Fade to Slide” showcased Bang on a Can’s ability to transcend labels.  The sensitive playing of cellist Ashley Bathgate during Michael Gordon’s meditation on mortality “Light is Calling” was almost as heartbreaking as the sparse attendance for the crown jewel of Open Spaces.


---
I reviewed the record-breaking concert by Taylor Swift, Camila Cabello and Charlie XCX at Arrowhead Stadium.

---
The promotional video for Cropped Out causes me to my question my decision to attend next month’s outsider music festival in Louisville.

(Original image by There Stands the Glass.)
Posted by Happy In Bag at 11:21 AM No comments: 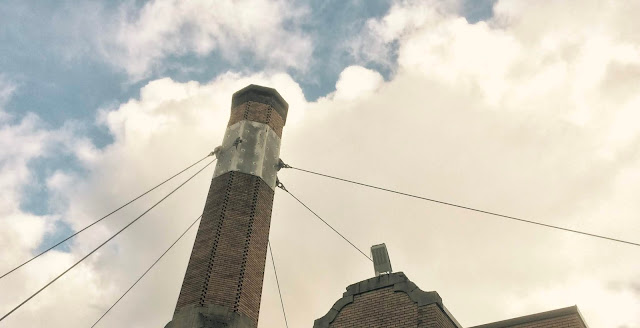 I almost bailed on Nicole Mitchell’s Maroon Cloud after ten disorienting minutes.  Acclimating to the maelstrom created by the flutist’s drummer-less quartet is challenging.  The initial rough sledding serves to heighten the ultimate payoff.  Mitchell, vocalist Fay Victor, pianist Aruán Ortiz and cellist Tomeka Reid revive the most experimental aspects of the Sun Ra Arkestra and the Art Ensemble of Chicago.  Victor insists that “sometimes a sound represents eternity” on “Sound.”  She’s right.  Maroon Cloud has all the earmarks of a timeless avant-garde album.


---
I created an four-minute audio feature about Lajon Witherspoon of Sevendust for KCUR.

---
I yakked about Open Spaces on KCUR.

---
The American Jazz Museum held a press conference to promote a Randy Weston concert in 2010.  Only a television cameraman and I showed up.  Here are my notes documenting the odd event.  The jazz legend died Saturday.

---
I relate to the locale of the Netflix series Ozark as much as the next Midwestern yokel.  Return, the forthcoming album by William Blackart, acts as a supplemental soundtrack to Ozark.  The Arkansas based singer-songwriter makes hardscrabble roots-rock in the vein of John Moreland.  Blackart’s current tour of Arkansas, Oklahoma and Missouri includes a stop at the Westport Saloon in Kansas City on September 26.

---
I didn’t want to invest time in Cyrus Chestnut’s Kaleidoscope, but there’s just no denying a piano trio album that ranges from Erik Satie to Deep Purple.

---
Bruce Soord of the Pineapple Thief didn’t make much of an impression on me when I heard him open a concert for Steven Wilson in 2016.  Dissolution, the new album by the Pineapple Thief, does little to alter that perception.  RIYL: second-tier Roger Waters, dyspeptic pomp, a poor man’s Peter Gabriel.

(Original image by There Stands the Glass.)
Posted by Happy In Bag at 10:57 AM No comments:

My date threatened to run off with Jimmie Dale Gilmore at Knuckleheads on Saturday.  I understood her impulse.  The Texan is an even groovier variant of Willie Nelson.  And at 73, Gilmore’s voice remains celestial.  He’s touring with Dave Alvin in support of their collaborative album Downey to Lubbock.  (Here’s the title track.).  They’re backed by a band of ringers including Lisa Pankratz.

Alvin’s frenzied guitar solos and the surprising jam-based segues were pleasing, but Gilmore was the main attraction.  His delivery on Woody Guthrie’s “Deportee (Plane Wreck at Los Gatos)” was free of the sanctimony that often spoils the song.  And hearing Gilmore warble “Tonight I Think I’m Gonna Go Downtown” was worth the $70 I paid at the door.

Jon Langford opened the show.  After noting my enthusiasm for the man who described he and his accompanist John Szymanski as “sad old guys playing acoustic guitars,” a few members of the audience of about 200 asked me about Langford.  I told them that his band the Mekons was the best rock group of ‘80s.  Langford seemed more inclined to abscond with my date than Gilmore.  I’m relieved that she didn’t ”Treat Me Like a Saturday Night”.

(Original image of Jimmie Dale Gilmore by There Stands the Glass.)
Posted by Happy In Bag at 7:03 AM No comments: