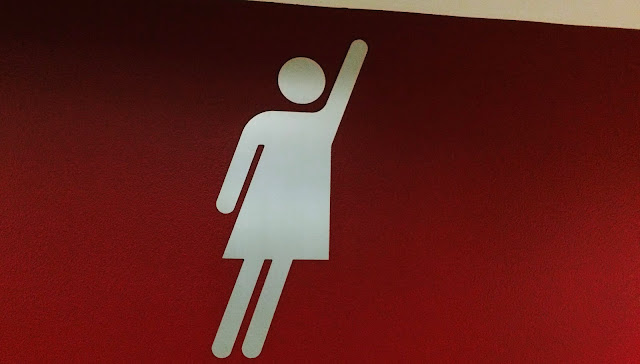 I dedicated much of a recent vacation in Portland to watching men’s college basketball games at the Moda Center.  Teams representing Duke, Michigan State, North Carolina and Gonzaga were among the elite squads competing in the PK80 tournament.  Attending 12 games in three days became a tedious chore, but the soundtrack in the arena was far from tiresome.  Customary jock jams by the likes of Gary Glitter, Bon Jovi and C+C Music Factory weren’t aired.  Instead, crowds were treated to a vibrant playlist of hip-hop and rap hits that included Kendrick Lamar’s “Humble,” Kanye West’s “Power,” Post Malone’s “Rockstar” and Diddy’s “Watcha Gon’ Do.”  Seeing thousands of seated sports fans and a handful of players warming up on the court chanting “percocet, molly, percocet” in unison to Future’s “Mask Off” was one of the most surreal moments I’ve experienced in 2017.


---
I wrote a profile of Edison Lights’ Chris Doolittle for KCUR.

---
I named Madisen Ward and the Mama Bear the KCUR Band of the Week.

---
I reviewed the Matt Cook Collective’s Along Those Lines at Plastic Sax.

---
I felt as if I was trapped in an episode of Portlandia when I caught a set by The Minders at Turn! Turn! Turn! in Rip City last week.

(Original image by There Stands the Glass.)
Posted by Happy In Bag at 1:36 PM No comments: 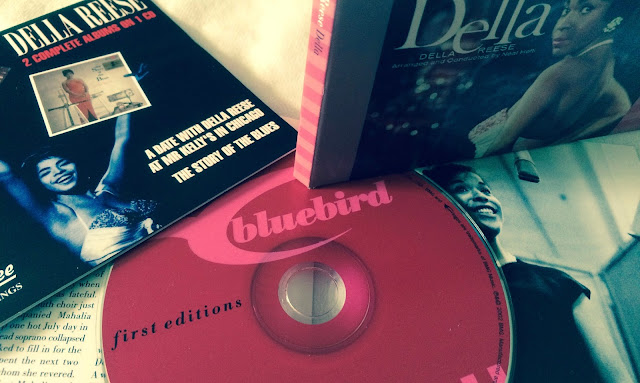 I marveled at the tart voices of Patti LaBelle and Fantasia on consecutive evenings in March.  Unconventional stylists with piercing voices who value expressiveness more than pretty notes, LaBelle and Fantasia work in the tradition of offbeat R&B shouters like Della Reese and Dinah Washington.  Here’s Reese’s show-stopping reading of “Lonelyville” in the 1958 flick Let’s Rock.  Reese died on November 19.


---
I reviewed St. Vincent’s concert at the Uptown Theater.

---
I reviewed the Kansas City debut of Flying Lotus for Plastic Sax.

---
I featured TJ Hooker-Taylor in my weekly KCUR segment.

---
I hope you enjoy using the Kansas City Jazz Calendar.

---
Lettuce’s Witches Stew, a faithful recreation of tracks from Miles Davis’ Bitches Brew and In a Silent Way, is as pointless as it is impressive.

---
Sometimes, you really can judge an album by its cover.  Star vocalist Cecilia Bartoli and cellist Sol Gabetta collaborate on festive baroque music on Dolce Duello.  (I don't like it.)

---
Sharon Jones’ swan song Soul of a Woman is wonderful.

---
I was certain that I would embrace Anouar Brahem’s Blue Maqams.  After all, the imaginative oud player is supported by pianist Django Bates, bassist Dave Holland and drummer Jack DeJohnette.  Alas, I’m nonplussed.

The early darkness imposed by last week’s time change and the predominantly gloomy weather in Kansas City have threatened to turn me blue.  Yet I don’t need a mood therapy light when I have Vives.  The sunny music on Carlos Vives’ tenth studio album plays like a greatest hits collection.  Each of its perfectly constructed 18 tracks is irresistible.  It’s no accident that the colorful video for “La Bicicleta”, the Columbian’s lustrous Latin pop duet with Shakira, has been viewed more than a billion times.  The corny video for “Al Filo de Tu Amor”, one of my favorite tracks, has a measly 41 million views.  The therapeutic sonic sunshine of Vives has rescued me.

---
I featured Stevie Stone on my weekly KCUR segment.

---
I bought a $35 ticket to sit in the upper balcony of Muriel Kauffman Theatre to see the Lyric Opera’s production of Joby Talbot's “Everest” last night.  The vertical stage set was reminiscent of the innovative production for Kanye West’s Yeezus tour.  And “Everest” sounded more like “Tommy” than “Turandot.”  So why was I one of the youngest people in the half-full room?

---
My review of the Victor Wooten Trio’s appearance at the Madrid Theatre is at Plastic Sax.

---
Syleena Johnson, the daughter of Syl Johnson, spelled “rehash” wrong in the title of her unnecessary Rebirth of Soul album.  RIYL: Ruth Brown, the good ol’ days, Solomon Burke.  Here’s “Make Me Yours”.

---
God bless Protomartyr.  I love the vibe of Relatives in Descent even though the songwriting is suspect.  RIYL: the Fall, inebriation, the Hold Steady.  “Don’t Go To Anacita” is the best song.

---
ECM Records’ new pact with streaming services makes me feel as if I received an unexpected check in the mail.

(Original image by There Stands the Glass.)
Posted by Happy In Bag at 10:26 AM 1 comment:

I Spit My Heart Out, Looking Out For My Best Interests 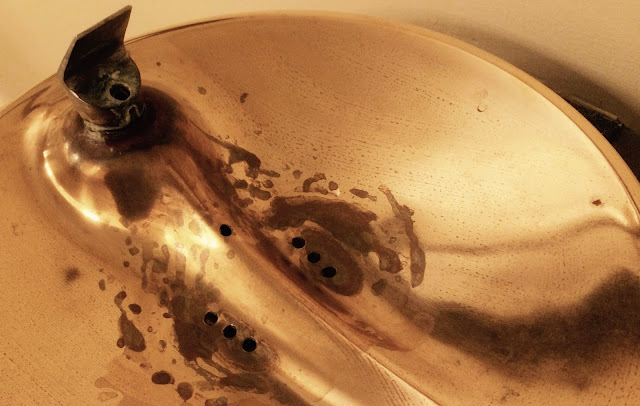 The king is dead.  Long live the kings.

Following last night’s slightly disappointing concert by Tyler, the Creator, I’m officially switching my primary deviant hip-hop allegiance to Brockhampton.  Tyler behaved like a semi-responsible adult at the Truman.  That’s not what I want from the disruptive artist I fell hard for in 2011.

Brockhampton is right on time.  ”Junky” is among the thrillingly subversive anthems on the mind-boggling Saturation 2.  (Saturation, the first album the Texas collective issued in 2017, isn’t quite as transcendent.)

The so-called boy band is loaded with transgressive young talent.  I fully expect two or three of its members to become mainstream stars who will inevitably disappoint me a few years from now.  Until then, the thrill isn’t gone.


---
I reviewed Tyler, the Creator’s concert at the Truman for The Kansas City Star.

---
I named Katy Guillen & the Girls the KCUR Band of the Week.

(Original image by There Stands the Glass.)
Posted by Happy In Bag at 12:53 PM No comments:

Concert Review: Take Me to the River at the Folly Theater 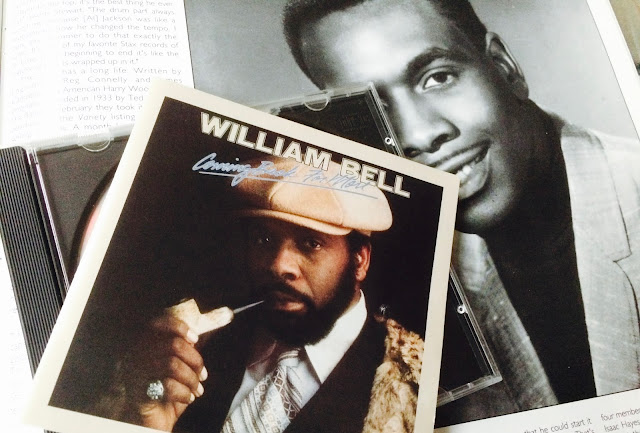 A concert starring the veteran soul and blues men William Bell, Charlie Musselwhite and Bobby Rush was undercut by tedious speechifying and a galling parade of lesser talent at the Folly Theater on Friday.

Apparently intended as an old-school soul revue with an educational component, Take Me to the River was a well-intentioned but woefully misguided presentation that often resembled a patronizing infomercial designed to appeal to PBS viewers who favor Celtic dance specials.  For dedicated roots music aficionados, the show was excruciatingly frustrating.

Despite the presence of organist Charles Hodges and bassist Leroy Hodges- members of the storied Hi Records rhythm section- the first 45 minutes of the show were forgettable.  The Memphis rapper Al Kapone was the only featured entertainer in the opening segment who wasn’t appallingly mediocre.

Each of the three stars was allotted about 15 to 20 minutes.  Even without the dancers that help make his lascivious concerts memorable, Rush, 83, was an astounding force of nature.  Musselwhite affirmed that he’s the greatest living blues harp player.  Bell- the reason I bought $35 rear balcony tickets to the show (I’d never seen him)- looked and sounded half his 78 years.  His set included “I Forgot to Be Your Lover,” but not “Born Under a Bad Sign” or “Private Number.”

Organizers probably hoped that members of the audience of about 700 rushed home to watch the Take Me to the River documentary on Netflix.  That’s the last thing I’ll do after enduring the poorly conceived and extremely disappointing show.  Instead, I’ll begin making plans to catch a proper performance by Bell in 2018.

---
Honestly isn’t the album I wanted or expected from Lalah Hathaway.  The glitchy beats and her astounding voice make for an odd pairing, but I suspect I’ll come to embrace the surprising sound.  RIYL: Robert Glasper, legacies, Kelela.  The politically charged video for the title track doesn’t make much sense.

---
Enjoying Sam Smith’s The Thrill of It All is a lot like tearing up during sentimental television commercials.  I confess to committing both transgressions in recent days.  RIYL: Dusty Springfield, pablum, Adele.  Here’s ”Pray”.

---
I didn’t expect to appreciate Fever Ray’s Plunge, but the album is even more preposterously affected than I anticipated.  RIYL: nails on chalkboards, Björk knockoffs, playing yourself.  Here’s “Mustn’t Hurry”.

---
In theory, Mostly Other People Do the Killing is one of my favorite bands.  The reality is far different.  Loafer’s Hollow, the brainy ensemble’s latest effort, is an attempt to bring avant-garde concepts to trad jazz.  It should be thrilling.  Instead, it’s merely irritating.

(Original image by There Stands the Glass.)
Posted by Happy In Bag at 7:38 AM No comments: 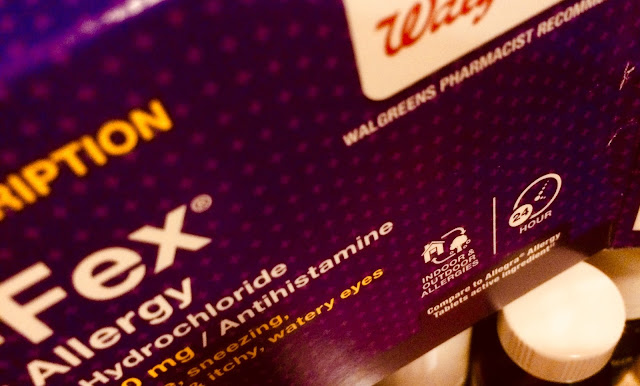 Anyone who has listened to Future more than me in recent months probably has a nasty codeine habit.  The Atlanta artist has overwhelmed his admirers with an avalanche of high-quality, opiate-laced music in 2017.  My addiction is problematic.  As a guy who recently reminded readers of his affinity for overtly Christian rappers, it’s a blessing that I don’t always comprehend Future’s lyrics.  Even so, mesmerizing tracks like ”Feed Me Dope” from Future’s new collaboration with Young Thug match my current mindset.  The audaciously synthetic sound will almost certainly sound hopelessly dated in a year or two, but at this moment, I’m a hopeless fiend for Future.

---
I named the MGDs the KCUR Band of the Week.

---
Muhal Richard Abrams has died.  I’m horrified that I never heard the jazz giant perform.  I need to get serious about checking the likes of Anthony Braxton, Henry Threadgill and James “Blood” Ulmer off my bucket list.

---
I overlooked Move Upstairs, the wondrous new album by the Como Mamas, when it was released several months ago.  RIYL: Naomi Shelton & the Gospel Queens, salvation, the Staple Sisters.  Here’s “Count Your Blessings”.

(Original image by There Stands the Glass.)
Posted by Happy In Bag at 1:49 PM 1 comment: