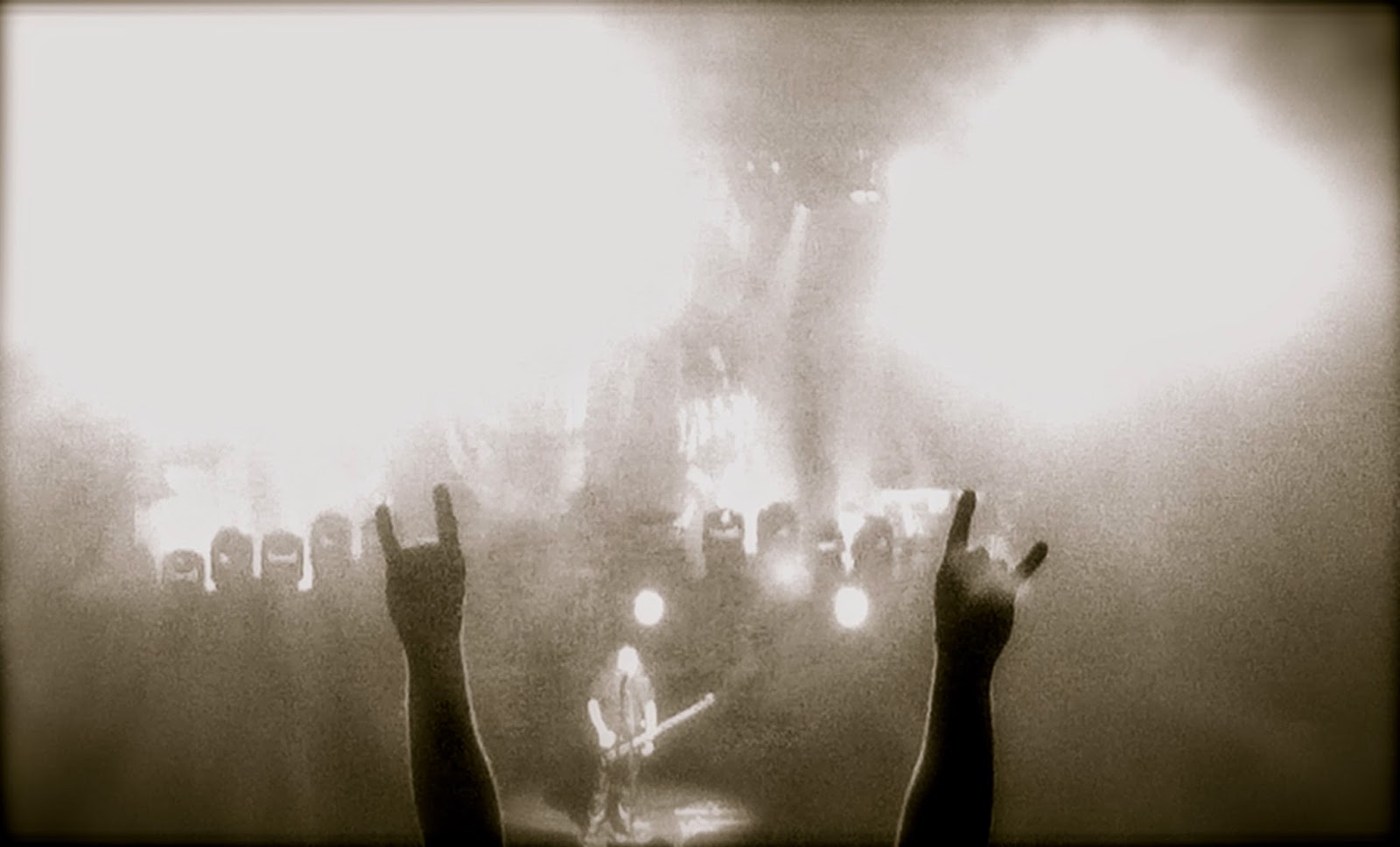 Top Shows of 2014
When I look at the list of my favorite live performances of the first six months of 2014, I'm certain that I'm one of the most fortunate people on the planet.

Top 50 Albums
Few things provide me with a bigger thrill than listening to an album for the first time.  Digital streaming, consequently, has been a godsend.  I've already listened to 234 new releases in their entirety in 2014.  My 50 favorites are listed below.  Here's a corresponding Spotify playlist.

(Original image by There Stands the Glass.)
Posted by Happy In Bag at 11:22 AM 2 comments: 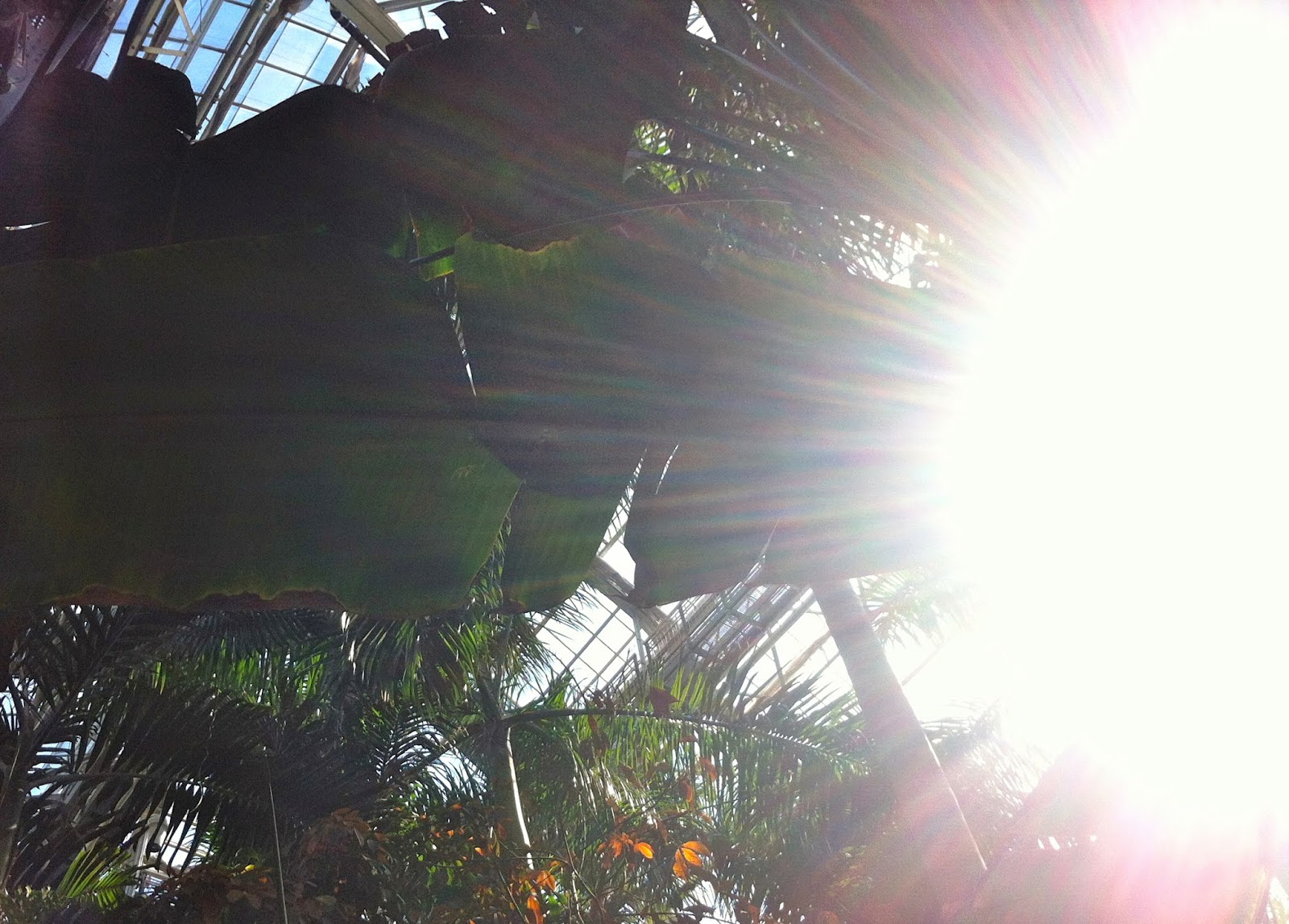 The Grand Ole Opry took a lot of my money in the 1990s.  I felt like a doofus every time I joined the throngs of tourists for the Opry's cheesy skits in the soulless environs of the Opryland Hotel complex.  Yet those were the only times I saw legends including Roy Acuff, Little Jimmy Dickens, Jack Greene, Jimmy C. Newman, Johnny Russell, Hank Snow and Porter Wagoner perform.  Newman died on June 21.  Here's scratchy old footage of "Alligator Man."

---
"Hometown", a collabo between Kansas City's Skiem Hiem and Oakland's the Jacka, may be the definitive Kansas City music video of 2014.

---
Stik Figa represents Topeka in the video for "Knowhere."

---
I comment on the late Horace Silver's connection to Kansas City here.

---
I adore songs about God, Satan and Elvis.  Nick Cave's performance at the Midland on Wednesday, consequently, made me deliriously happy.  Tim Finn reviewed the show.

---
I would pay good money to watch a comment reconstruction depicting the moronic chatter attached to a video of T.I. and Iggy Azalea's "No Mediocre".

---
A lot of critics are hailing Willie Nelson's Band of Brothers as a comeback album.  Longtime readers of There Stands the Glass know that I'm quite fond of many of his recent releases.  Band of Brothers is merely adequate.  Here's the video for the title track.

---
Raise your hand if you've been waiting decades for Jonathan Richman to quit goofing around and finally make another album in the vein of the Modern Lovers.  The members of Parquet Courts have taken matters into their own hands.  Sunbathing Animal is RIYL: Lou Reed, wondering what happened to Jonathan Richman, Pavement.

(Original image by There Stands the Glass.)
Posted by Happy In Bag at 2:20 PM No comments: 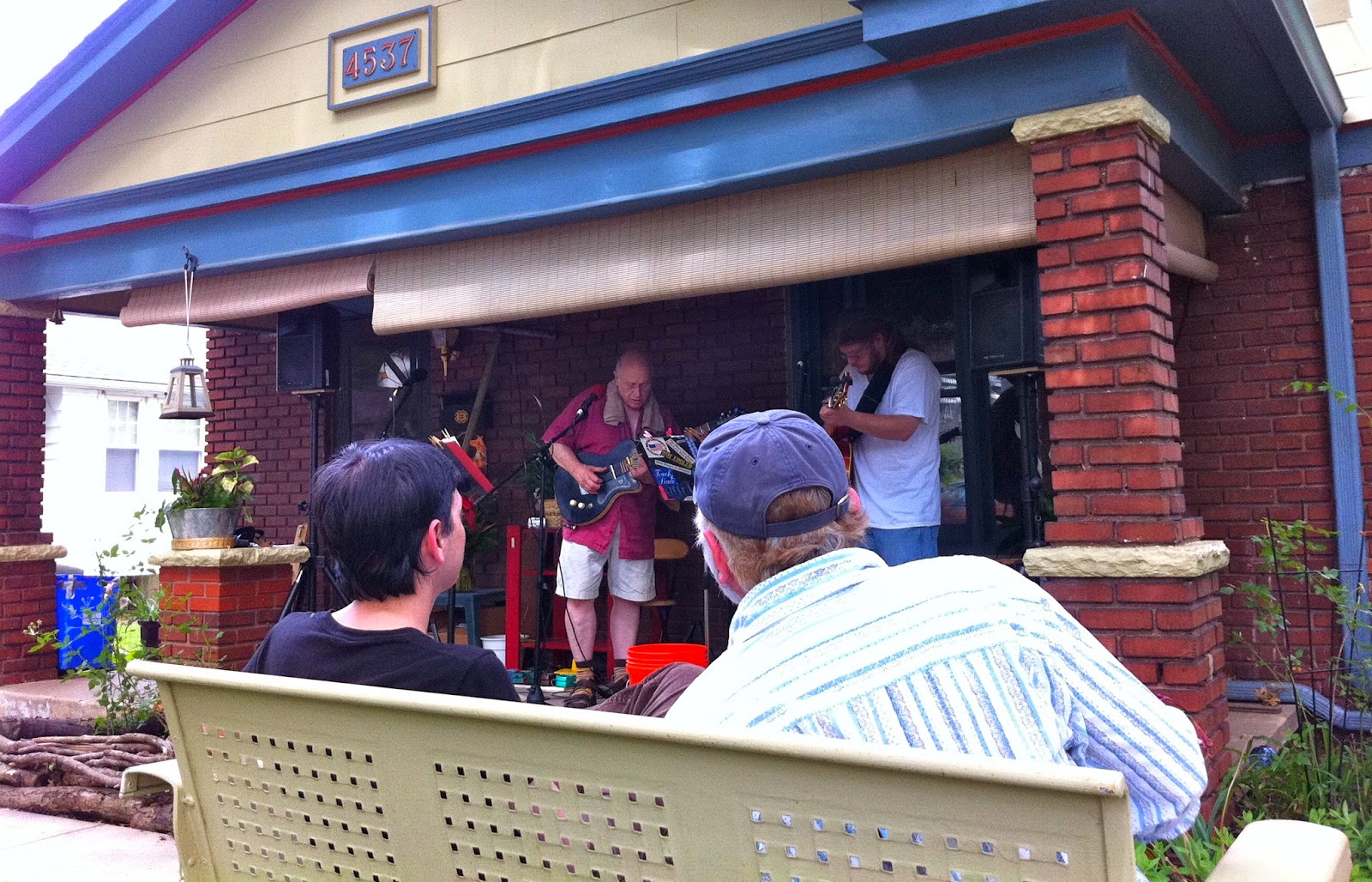 Boulevardia resembled a Plaza Art Fair for millennials. While I had a good time hanging out with my friends, I wasn't drinking or eating, disallowing me three-quarters of the pleasures noted in the large-scale event's description as "a nation rich in beer, food, music and beer." Most of the bands from elsewhere didn't appeal to me either. Maybe next year I'll be able to quench my thirst while listening to headliners I enjoy.

PorchFest KC, however, was right up my alley. Dozens of porches in the neighborhood southeast of the intersection of State Line and Westport Road served as stages for an eclectic mix of performances by amateur and professional musicians.

Kids, dogs and friendly adults wandered from yard to yard taking in the sounds. A psychobilly trio had a loud PA that attracted a correspondingly large crowd. I heard the dudes in the top photo play groovy versions of "Friend of the Devil" and "I Know You Rider." Timbers, an Americana band, pleased an enthusiastic audience. The tango/classical duo in the photo below played the best music I heard Saturday.

Lots of people were drinking beer at PorchFest.  But unlike my experience at Boulevardia, I didn't feel like I needed to down a few alcoholic beverages in order to relax.


---
Bettye LaVette's outing at Knuckleheads on Monday is my new favorite show of the year. Here's my review.

---
I reviewed the Knuckleheads debuts of Judy Collins and Don McLean.

---
I saw Pharaoh Sanders at Blues Alley in Washington D.C. last week. My notes are at Plastic Sax.

---
If I'm ever forced to listen to a Conor Oberst project on repeat, I'd like it to be his new Upside Down Mountain. RIYL: Fred Neill, Omaha, Tim Buckley.

---
Our Year, the latest from Kelly Willis and Bruce Robison, is delightful. RIYL: Conway & Loretta, the old Austin, George & Tammy.

---
The Everymen's Givin' Up On Free Jazz is RIYL: The Hold Steady, New Jersey, Meatloaf. Here's the ridiculous video for "Spain." 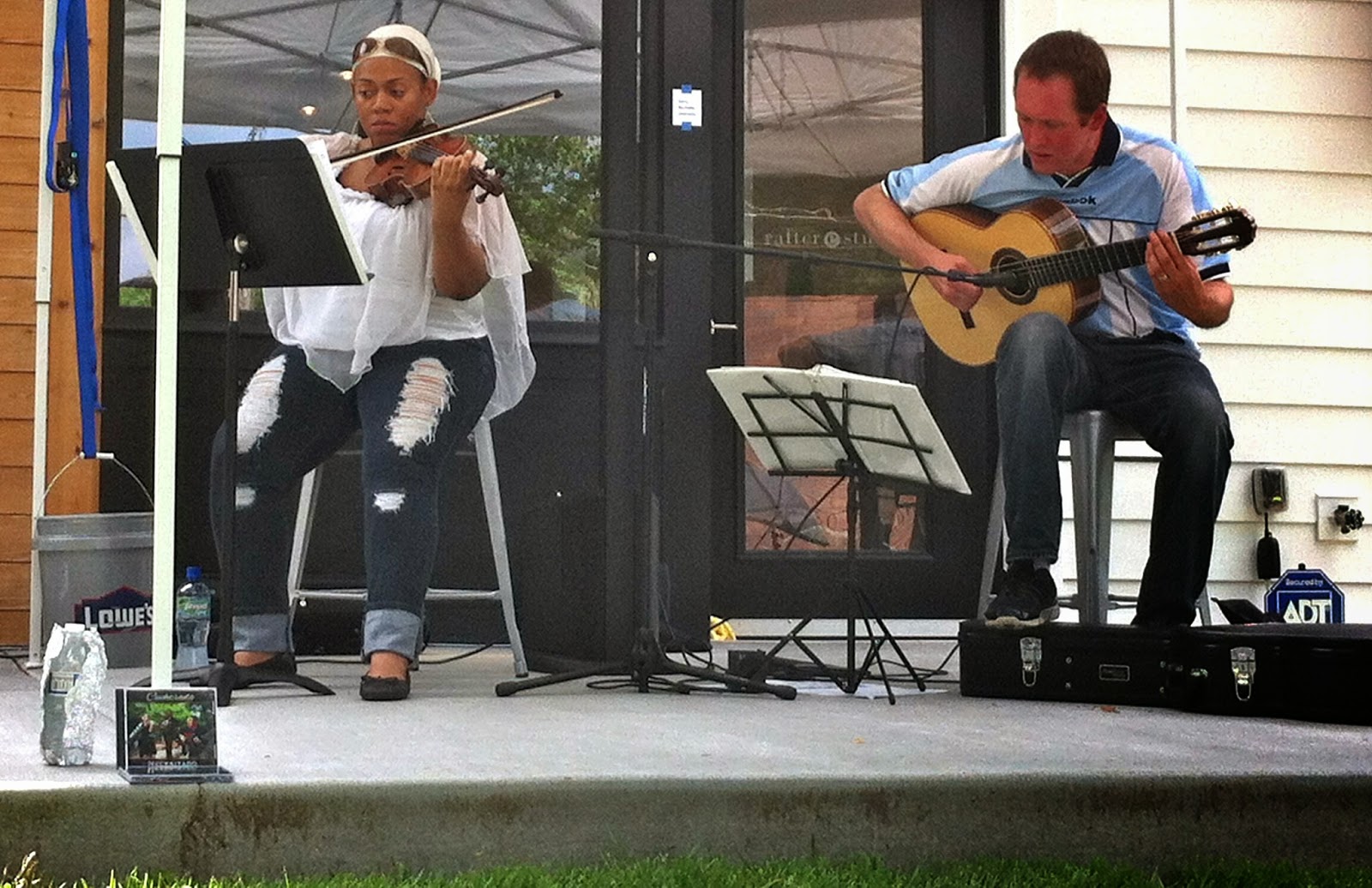 (Original images by There Stands the Glass.)
Posted by Happy In Bag at 7:15 PM 1 comment: 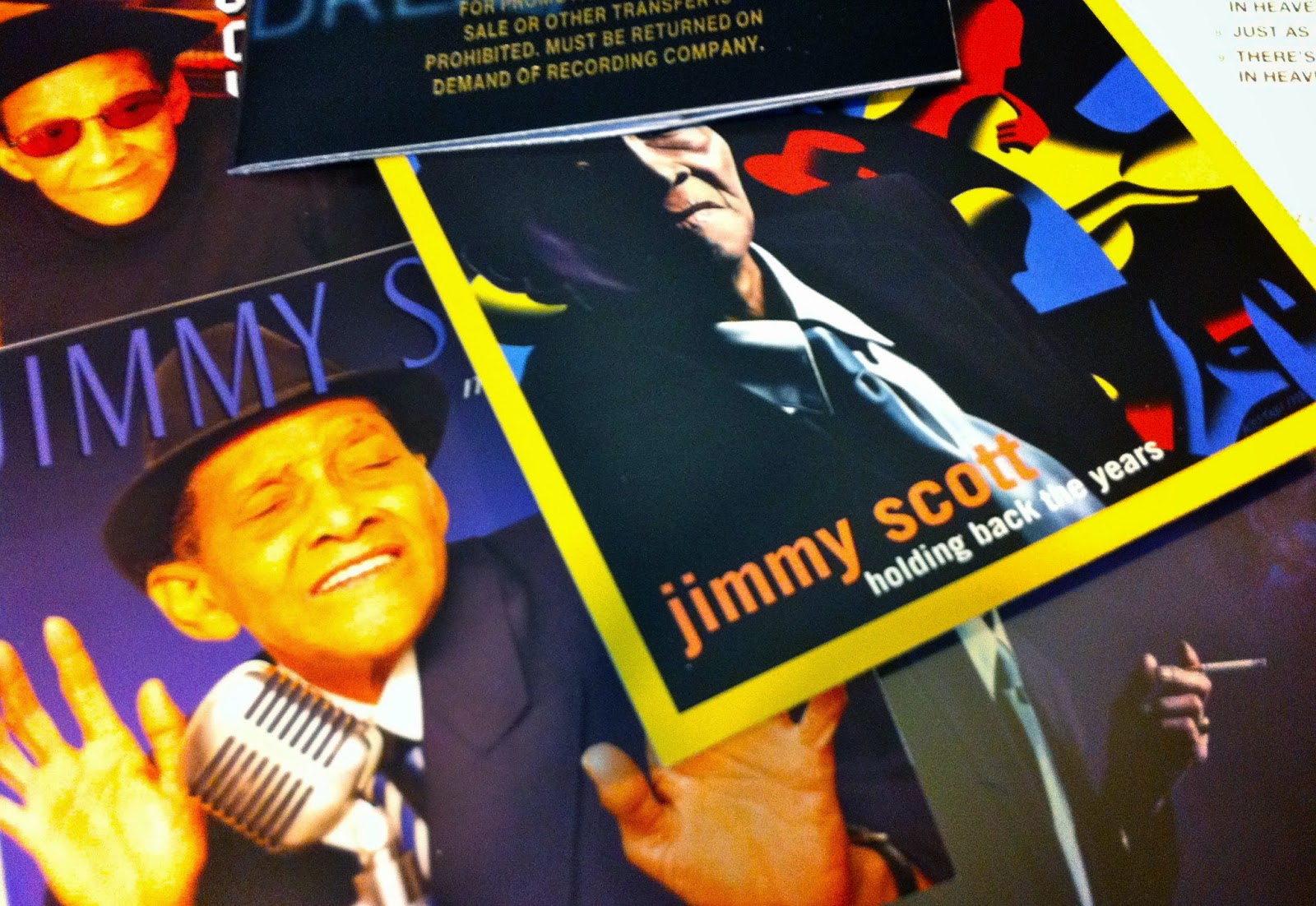 As with a lot of people I knew at the time, I was floored by Jimmy Scott's so-called comeback albums released by Sire Records in the early '90s.  The idea that a living, breathing double of Billie Holiday existed seemed extraordinary.  In 2000, I had the privilege of escorting Scott around the fairgrounds of the New Orleans Jazz Fest & Heritage Festival in my capacity as a sales rep for Milestone Records, his label at the time.  In spite of the oppressive heat, suffocating dust and my insistence that he get to autograph-signing events on schedule, Scott was unflaggingly gracious.  He died yesterday.

(Original image by There Stands the Glass.)
Posted by Happy In Bag at 4:47 PM No comments: 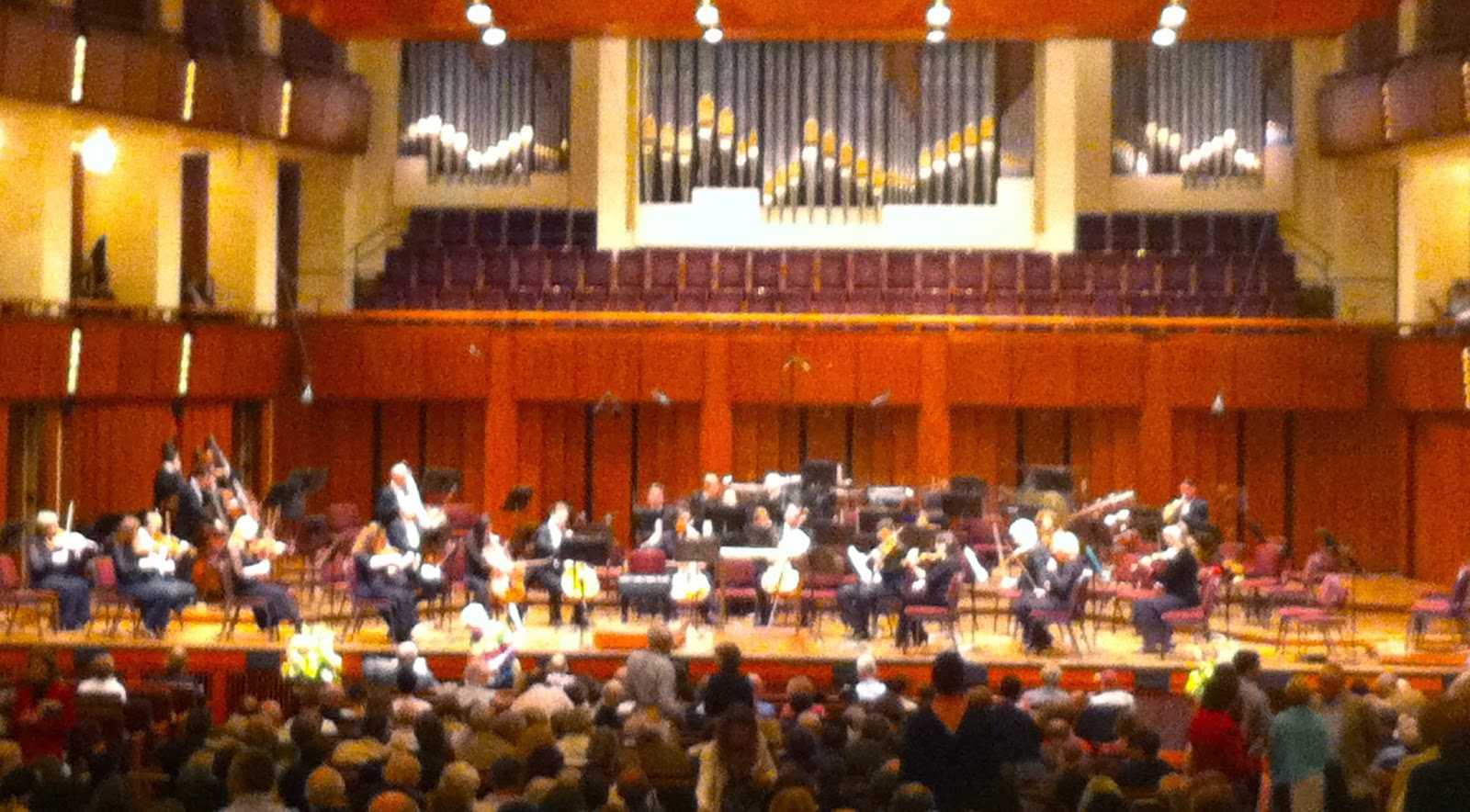 I don't get starstruck by musicians.  The power held by politicians, however, puts me in awe of elected officials.

That's why I was intent on exploring much of the world they inhabit during a recent trip to Washington D.C.  I spent hours in the galleries of the House and Senate and roamed the halls of Congressional office buildings like a teenage groupie in search of her favorite teen idols.

My first trek to the Kennedy Center was an integral part of that experience.  I witnessed guest artists Nicola Benedetti (a violinist I reviewed at the Folly Theater in February) and cellist Leonard Elschenbroich perform Brahms and Tchaikovsky with the National Symphony Orchestra.

The performance was more than fine, but I was just as interested in gazing at the Watergate building from the riverside patio and wondering how often the honorary trustees Michelle Obama, Laura Bush, Hilary Rodham Clinton, Barbara Bush, Nancy Reagan and Rosalynn Carter visit the Kennedy Center as I was in analyzing the music.

For the record, the sprawling complex may be much larger than Kansas City's Kauffman Center for the Performing Arts, but it's not nearly as nice.  And while I sat directly behind a famous actress, I was disappointed that I didn't spot a single politician.

---
Mills Record Company made a nice video of a performance by the Ray-Tones at the record store.

---
Various Blonde made a video for "Downtown Frown".

---
The KC Cypher Series ends its second season on a low note.

---
Here a trailer for The Pleasures of Being Out of Step, a documentary about Nat Hentoff.

---
The lo-fi production and plaintive keening of Tim Cohen's voice on the Fresh & Only's House of Spirits put me in mind of Mekons.  RIYL: 1985, Fear and Whiskey, American Music Club.

---
File under uneasy listening. Say Anything's Hebrews is RIYL: the Get Up Kids, diaries, Brand New.

(Original image by There Stands the Glass.)
Posted by Happy In Bag at 3:05 PM No comments: 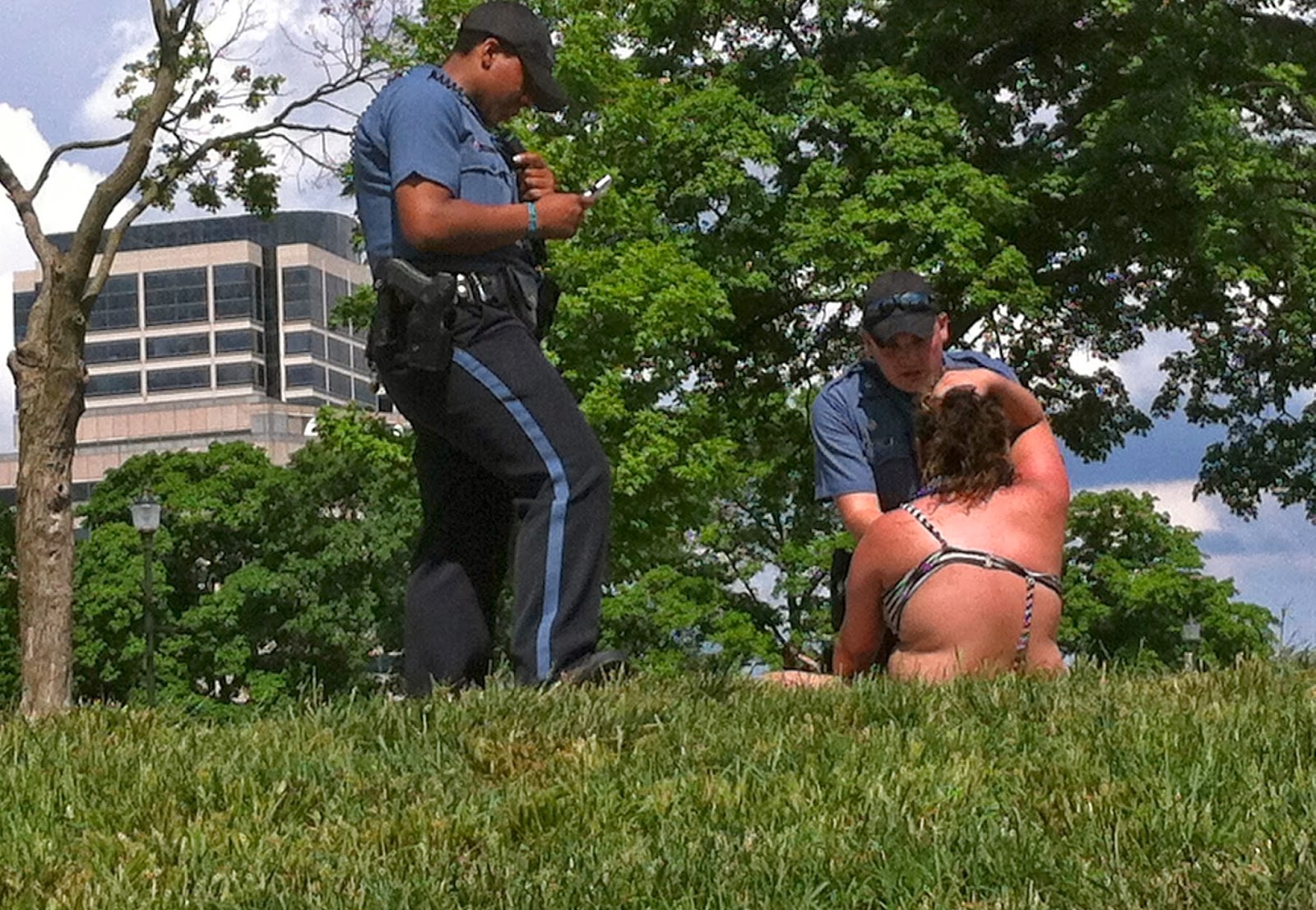 I've seen at least three variations of the same exchange on my social media feeds.  After a fan raves about the new Bob Mould album, one of his pals dismisses the positivity by suggesting that Hüsker Dü was superior.  Who has time for nostalgia when F*cked Up just released Glass Boys?  Without ever sounding like it's aping its predecessors, F*cked Up combines the melodic rage of Hüsker Dü with Pete Townshend's rebellious theorizing. I'll blow the dust off my collection of Hüsker Dü vinyl on the SST label once I've had my fill of Glass Boys, but I don't anticipate that happening anytime soon.


---
I reviewed Rockfest on Saturday.  And for the record, my report noted the Aaron Lewis incident that subsequently became a meme.

---
My notes on Sunday's performance by Ingrid Laubrock and Tom Rainey are at Plastic Sax.

---
Here's a new video for a track on the Gee Watts album I reviewed at There Stands the Glass on April 12.

---
A cameo by Music Millennium's Terry Currier makes Bob Mould's "I Don't Know You Anymore" my favorite music video of 2014.

---
Blu's Good to Be Home may be a good album, but I just can't deal with the knob-twisting production.  RIYL: 9th Wonder, annoying modulation, Digable Planets.

---
The release of Me. I Am Mariah… The Elusive Chanteuse is testing the limits of my love/hate relationship with Mariah Carey.

---
Black Stone Cherry's blend of Southern rock and metal has long appealed to me, but the new album Magic Mountain isn't very good.

---
A few tantalizing moments on Meshell Ndegeocello's Comet, Come To Me cause me to marvel that she's not more popular than Prince.  The worst moments remind me of why she remains a cult artist.  RIYL: Janelle Monáe, arty dance music, Daft Punk.

---
The guys in Parquet Courts put great records in their bags.

---
It's nice that Dave and Phil Alvin put their differences aside to perform the songs of Big Bill Broonzy on Common Ground.

(Original image by There Stands the Glass.)
Posted by Happy In Bag at 8:36 AM No comments: