I conducted the same exercise in June, May, April, March, February and January.

(Original image of Gov’t Mule by There Stands the Glass.)
Posted by Happy In Bag at 1:32 PM No comments:

The Big Shoulders of Avery R. Young, Chance the Rapper and Resavoir

Avery R. Young’s Tubman. is a historically-minded, gospel-oriented song cycle emphasizing liberation theology.  Clearly influenced by Syl Johnson’s urgent 1970 album Is It Because I’m Black, the murky blend of gospel, blues and soul on Tubman. is another momentous statement from Chicago.  The curtains of the mysterious project are parted for Young’s appearance on a daytime television show in his hometown.

Gospel also informs the highly anticipated album by a far more popular Chicago artist.  As the programming director of the hypothetical radio station The Juice, I’d immediately put a third of the tracks on Chance the Rapper’s The Big Day into heavy rotation.  In the real world, however, The Big Day is a massive disappointment.  I continue to adore Chance’s outlook, but the transcendent magic that characterizes his best work is missing.

The Big Day would have benefitted from a more open embrace of Chicago’s thriving jazz scene.  The city threatens to overtake New York as the jazz capital of the world.  Resavoir’s thrilling new self-titled album on the essential International Anthem label documents a transportive component of Chicago’s improvised music scene that bears little resemblance to anything on the conventional The Big Day or the gritty Tubman..

(Original image of Chicago by There Stands the Glass.)
Posted by Happy In Bag at 12:56 PM 1 comment:

I never spent much time with the music of Kurt Rosenwinkel.  While it’s fun to blame my unfamiliarity with most of his catalog on a petty dislike of his hats, my ignorance stems from never having seen a performance by the acclaimed guitarist, composer and bandleader.  I’ve blown off chances to see him in New York City, and I didn’t catch him at his two area appearances in recent years (at the Blue Room in 2009 and at the KU Jazz Festival in 2013.)

Eric Lewis, the genre-bending artist who works as Elew, just issued a new solo piano album of Rosenwinkel compositions on Rosenwinkel’s in-house record label.  The stunning project reveals that Rosenwinkel’s songs merit comparison to the likes of Wayne Shorter and Pat Metheny.  Cubism inspired me to go down a rabbit hole.

I began my Rosenwinkel binge with Do It 1992.  Released in April, the goofy 23-minute project features a throwback drum production.  I moved on to Caipi, a bossa nova-inspired pop album released in 2017.  It’s jarringly weird.  I jumped back to the 2003 album Heartcore.  How I regret missing this stunningly prescient project!  Rosenwinkel anticipates the sound collages popularized by James Blake, Kanye West and Justin Vernon a decade later.

By the time I finally get around to studying the remainder of Rosenwinkel’s extensive catalog, I won’t be thinking about hats.


---
I reviewed concerts by Shawn Mendes and Khalid at the Sprint Center for The Kansas City Star.

---
I reviewed the return of Ehud Ettun and Henrique Eisenmann to the 1900 Building at Plastic Sax.

(Original image by There Stands the Glass.)
Posted by Happy In Bag at 7:16 AM 3 comments:

Buked and Scorned at Open Spaces

Partly because an obscenely large portion of my 2019 budget is dedicated to musical tourism, I spend an inordinate amount of time thinking about the fallout from the Kansas City Jazz & Heritage Festival (2017) and the Open Spaces festival (2018).  Both city-sponsored, artistically-thrilling endeavors were financial debacles.  An otherwise fascinating new article in The Pitch buries the lede.  Emily Park reports that “only 4,000 tickets were collected” for the three concerts at Starlight Theatre promoted by Open Spaces as The Weekend.  Just 4,000 of the cumulative 24,000 tickets that were available for concerts at Starlight Theatre headlined by the Roots, Janelle Monaé and Vijay Iyer were sold.  Even if all three concerts were condensed into a single show, paying customers would have filled only half of the 8,000-capacity Starlight Theatre.  Sometimes I hate being right.  As I predicted at the time (including on a segment of KCUR’s Up To Date program dedicated to the topic), the attendance figures for the most recent area concerts by the Roots (1,200), Monaé (2,000) and Iyer (200) indicated that trouble was brewing.  I was roundly ‘buked and scorned for forecasting the easily calculable outcome.  In an ongoing effort to fill the artistic void in Kansas City caused by the disaster, I’m currently planning my third music-oriented trip of 2019.

---
I reviewed an appearance by Ryan Keberle & Catharsis at the National World War I Museum and Memorial at Plastic Sax.

(Original image of a woefully attended Open Spaces performances by There Stands the Glass.)
Posted by Happy In Bag at 8:02 AM 2 comments:

I was horrified by the playlist designed to accompany outdoor grilling that a Kansas City radio station proudly posted to its social media accounts on the Fourth of July.  Funk-free, devoid of soul and socially comatose, the misguided song selection forced me to question the station’s mission.  I devised a new radio format as a corrective.  Inspired by the irresistible Lizzo song, I named the new concept The Juice.  It’s an adventurous twist on urban adult contemporary radio.  Edifying rap hits, adventurous R&B tracks, lush neo-soul, an expansive variety of oldies and a bracing jolt of progressive jazz add grit to the grown-and-sexy foundation.  The Juice’s unorthodox playlist of essential new music and proven classics would appeal to listeners in a wide range of demographic categories.  In fact, I’m confident The Juice would place among the top 15 stations in the Kansas City market.  Here are five hours of representative programming on The Juice.

(Original image of Kansas City's skyline by There Stands the Glass.)
Posted by Happy In Bag at 11:26 AM 2 comments:

Book Review: Bitten by the Blues by Bruce Iglauer

I checked the index immediately after purchasing Bruce Iglauer’s Bitten by the Blues at a used bookstore.  I was relieved that neither my name, the name of my former boss or the distribution company he owned were listed.  Enduring Iglauer’s furious outbursts decades ago left permanent emotional scars on my psyche.

As the founder of Alligator Records suggests in his 2018 autobiography, Iglauer played the role of “bad cop” to cash-strapped independent record label distributors in the late ‘80s and early ‘90s.  He was right to demand past-due money, of course, but my beleaguered colleagues and I at the Olathe-based company were often plugging holes in a moldering dike.  As a buyer/sales rep/warehouse worker sympathetic to Iglauer’s concerns, I was the only person at the company willing to allow him to rage at length.

Iglauer maintains an even keel in Bitten by the Blues. He provides an excellent summation of the era’s independent record label distribution business in a temperate tone and shares sales data, the financial terms of recording contracts and the painful erosion of his retail and distribution networks with admirable candor.

I’m obviously partial to geeky music obsessives.  Iglauer’s effusiveness throughout Bitten by the Blues is charming.  The “and-then-I-released-this-album” format gets tiresome, but his raves compelled me to return to several Alligator titles including Roy Buchanan’s When a Guitar Plays the Blues, Professor Longhair’s Crawfish Fiesta and Michael Burk’s Show of Strength for the first time in years.

I share Iglauer’s disappointment in the general conservatism of the blues audience and appreciate his grim acknowledgment that the blues is in an artistic and commercial tailspin.  Iglauer helped shaped the direction of the blues but he’s frustratingly powerless to reverse its flagging fortunes.  Alas, even a flare-up of Iglauer’s fearsome rage won’t help the music locate its missing mojo.


---
I write weekly concert previews for The KansasCity Star.

(Original image by There Stands the Glass.)
Posted by Happy In Bag at 2:01 PM 6 comments: 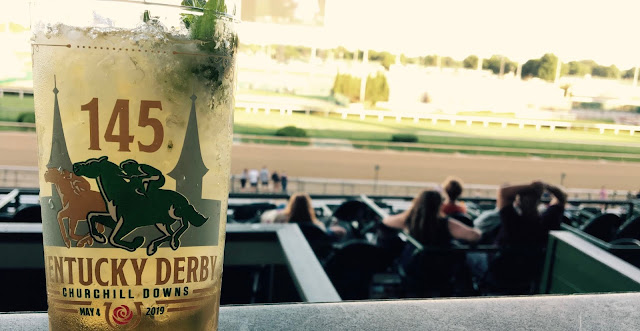 Gallivanting in Louisville and obsessively compiling lists in advance of an appearance on a radio program has prevented me from posting timely links.  Here’s a portion of what I’ve been up to when not indulging in the sorts of sinful behaviors depicted in the accompanying photo.


---
I’m proud of the audio feature I created for KCUR about the release of a new Jay McShann album.

---
I blathered about my favorite Kansas City music of the decade on KTGB’s Eight One Sixty program on Tuesday.

---
I write weekly concert previews for The Kansas City Star.  The new batch is here.  Last week’s recommendations are here.

(Original image by There Stands the Glass.)
Posted by Happy In Bag at 8:27 AM 3 comments: