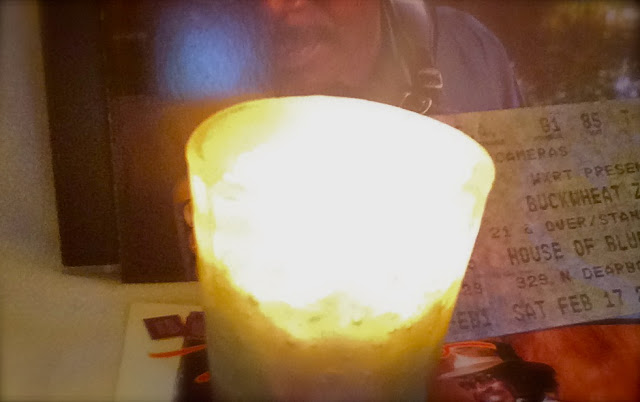 Black Top 1024.  That’s how my customers and I identified Buckwheat Zydeco’s 100% Fortified Zydeco when they reordered the album.  The title was one of several releases by the exceptional ambassador of Louisiana music that were in my catalog during my tenure as a music industry sales rep.  No strain of indigenous American music is more discordant or just plain weird than zydeco.  Stanley Dural, the bandleader behind Buckwheat Zydeco who died last week, made the music accessible.  Without his genial refinements, the language barrier, scratch of washboards and cacophonous accordions associated with zydeco might have continued to keep the form a safe distance from the mainstream.


---
I reviewed Chance the Rapper’s concert.

---
I address a pet peeve at the Kansas City jazz blog Plastic Sax.

---
I highlighted the music offerings at the Plaza Art Fair for The Kansas City Star and Ink magazine.

---
I reviewed a concert by Steve Martin, Martin Short and the Steep Canyon Rangers.

---
Jerry Corbetta of Sugarloaf has died.  (Tip via BGO.)

---
The music video for Shirley Collins’ ”Death and the Lady” is almost more than I can bear.

---
The heir to John Coltrane and Jimi Hendrix may be hiding in plain sight.  His name is John Scofield. On his excellently titled Country For Old Men, Scofield interprets classics like “I’m So Lonesome I Could Cry.”

---
I loved the 2000 album dwightyoakamacoustic.net.  The country artist’s Swimmin’ Pools, Movie Stars… may be just as good.

---
Willie Nelson is on a roll.  For the Good Times: A Tribute to Ray Price is perfect.

---
Rose Out the Concrete, Rich the Factor’s third album in as many months, isn’t as good as Smile or Whale Mafi.  Here’s the Kansas City legend’s ”In the Kitchen”.

---
I won't pretend to understand Yermande, an astounding recording by Mark Ernestus' Ndagga Rhythm Force.  But it's wonderful.  (Tip via Big Steve.)

(Original image by There Stands the Glass.)
Posted by Happy In Bag at 7:18 PM 1 comment:

Sing Me Back Home 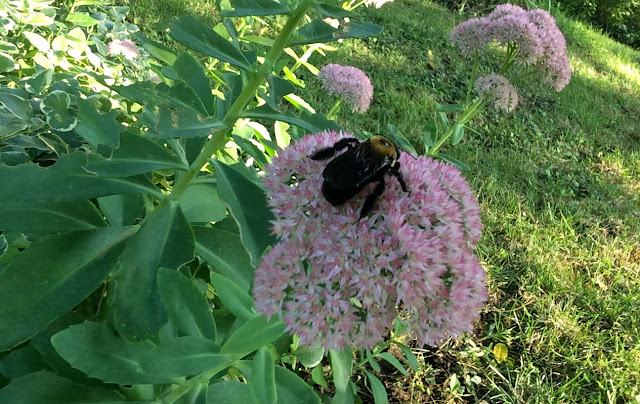 The insistent thump of Waylon Jenning’s bassist often rattled the floorboards of my home on Saturday and Sunday mornings when I was a kid.  My dad enjoyed blasting his favorite country albums by the likes of Waylon, Willie and Merle as he gave me marching orders.  I was reminded of those bygone days when I unexpectedly encountered a performance by Rex Hobart and the Misery Boys at a farmer’s market on Saturday morning.  I almost broke down when the honky-tonk band revived “Little Ole Wine Drinker Me,” a song I closely associate with my old man.


---
I wrote a lengthy examination of the previously uncharted career of the underground Kansas City rap legend Rich the Factor for KCUR.

---
I reviewed a concert by Death Cab For Cutie, Chvrches, Nathaniel Rateliff & the Night Sweats and the Greeting Committee.

---
Candido renewed my faith in humanity last week.  My notes are posted at Plastic Sax.

---
Chance the Rapper’s return to the Midland theater is my show of the week for The Kansas City Star and Ink magazine.

---
I discussed the reunion of the Anniversary on KCUR last week.

---
Lou Merenstein, the producer of Astral Weeks, has died.  (Tip via BGO.)

---
A young quartet of British geeks has released one of the best jazz albums of 2016.  Together, As One by Laura Jurd’s Dinosaur, is RIYL flouting convention, Esbjörn Svensson Trio, prog-rock.

---
I have a hard time appreciating the music of Sigur Rós, but I’m all in on Jóhann Jóhannsson’s Orphée.

---
“Do the funkro dance!”  Even when they’re terribly flawed, the obscurities on Nigeria Soul Fever: Afro Funk, Disco And Boogie: West African Disco Mayhem! give me enormous pleasure.  (Tip via Big Steve.)

---
Two or three excellent songs are hidden among the dreck of Usher’s Hard II Love.  Here’s ”No Limit”.

---
Something about Ben Wendel’s What We Bring, the mainstream jazz album of the moment, repels me.  RIYL: Gerald Clayton, jazz consensus, Kneebody. Here’s ”Song Song”.

(Original image by There Stands the Glass.)
Posted by Happy In Bag at 8:45 AM No comments: 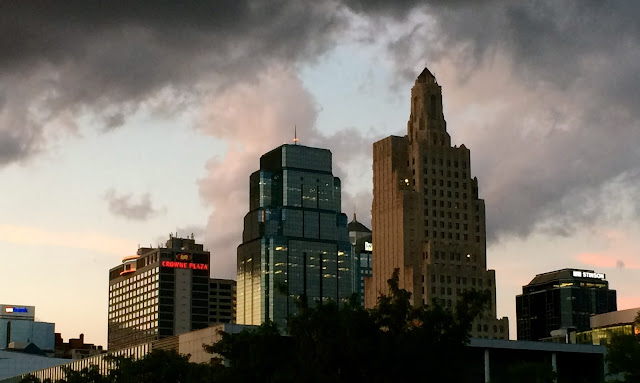 One of the most satisfying things about being an obsessive music consumer in the age of on-demand entertainment is that every Friday feels like Christmas.  I scour the recommendations of Spotify’s bots, listings at online retailers, emails from record labels and the social media discourse of my friends as I drink my first cup of coffee on Friday mornings.

Yet plenty of things of interest to me inevitably fall through the cracks.  I’m repeatedly shocked and disappointed when “important” titles by “major” artists are almost completely ignored by the official and unofficial gatekeepers.

I accidentally stumbled across Nearness, the new duet album by Joshua Redman and Brad Mehldau, three days after its release.  The saxophonist and pianist- two of the most prominent living jazz artists under 50- are in top form on the live recording.  The 16-minute reading of ”The Nearness of You” is sublime.

The Guardian, The Financial Times and The Wall Street are the only outlets that have bothered to post reviews of the project.  Times are tough for all 13,065 fans of contemporary improvised music and even harder for the 21,872 musicians who practice the form.


---
My three favorite acts at the Crossroads Music Fest were Stephonne Singleton, the Mitch Towne Trio and Julian Davis & the Hayburners.  My capsule reviews are here.

---
I chatted about Dan Thomas on KCUR last week.

---
I reviewed the Jorge Arana Trio’s Mammoth at Plastic Sax.

---
Don’t believe the hype.  The Beatles’ Live at Hollywood Bowl is still unlistenable.

---
Shirley Collins is back.

---
Eric Bellinger’s Eric B for President: Term One is filled with empty calories and even emptier promises.  RIYL: Usher, amorous R&B, Chris Brown.

---
Oh, for Pete’s sake.  Catherine Russell’s old-school Harlem On My Mind charmed me in spite of my predilections.  RIYL: Alberta Hunter, the era in which jazz was popular music, Ernestine Anderson.

---
Jeremih’s Late Nights: Europe is filled with nasty sex songs, but ”Dubai” is my jam.

---
In a perfect world, the Banks & Steelz collaboration wouldn’t be an unusual.  Anything But Words is RIYL: Run-D..M.C./Aerosmith, Beastie Boys/Rick Rubin, Public Enemy/Anthrax.

(Original image by There Stands the Glass.)
Posted by Happy In Bag at 5:30 PM 2 comments:

I’m a Man You Don’t Meet Every Day 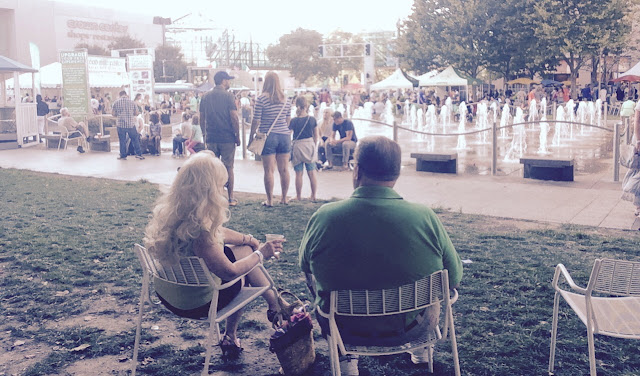 As another Kansas City music blogger tweeted that “I would not wish Irish Fest upon my worst enemy,” I was rolling my eyes as a generic band at the festival attempted to make room for itself on the overcrowded Americana bandwagon.  There’s a lot of trash to rummage though at The Kansas City Irish Fest.  There are also plenty of treasures to be discovered.  Here’s a rundown of the three best things I encountered Sunday.

Cait O’Riordan
Cait O'Riordan”s “Growing Up in the Pogues” presentation was worth the $18 I paid to enter the festival.  Sober, upbeat and charming, O’Riordan was a quote machine:


On the Pogues' attitude: We wanted to be the loudest, toughest gang in town.

On her self-described role as the band's "mascot": I would start fights but I couldn't finish them.

About her lead vocals on ”I’m a Man You Don’t Meet Every Day”:  It's my contribution to music history (and) my passport around the world.

About the Pogues' pre-show rituals: It didn't occur to us not to get on stage drunk and sloppy.

On the cause of her separation from the band: I wasn't the only drunk in the band but I was the youngest and the messiest… Everyone got better and better (as musicians) except me.

On the trappings of success: Once we had money for cocaine, things got really messy.

Eddie Delahunt
Like thousands of other people in the Kansas City area, I’ve been smitten with Eddie Delahunt for years.  He made me laugh several times on Sunday.  And had I been drinking, I almost certainly would have teared up during a rendition of a tragic ballad.

James Cramer
A pandering Van Morrison cover by the dudes that preceded a solo set by James Cramer on a side stage almost drove me to drink.  (I swear that the woman working for a whiskey vendor 30 feet away from the stage was calling my name.)  The front man of Tupelo immediately won me over by insisting that he had no interest in “rehashing” the past.  Even though his Hozier-ish approach isn’t my thing, Cramer is an undeniable talent.


---
I reviewed Kings & Queens, the new album by Eddie Moore and the Outer Circle, for KCUR.

---
I reviewed a concert by the Used.

---
I note the dominance of the Green Lady Lounge on Kansas City’s jazz scene at Plastic Sax.

---
I previewed the Mad Decent Block Party for The Kansas City Star and Ink magazine.

---
Fred Hellerman of the Weavers has died.  (Tip via BGO)

---
My affection for Bes, the new album by the Egyptian trio Dwarfs of East Agouza, has been maddening members of my compound who aren’t down with trance-noise.  RIYL: Sun Ra, astral projection, Can.  (Tip via Big Steve.)

---
Eddie Levert’s new album is nuts.  Did I Make You Go Ooo is RIYL: The O’Jays, lascivious septuagenarians, Prince.  Here’s the title track.

---
The tribute album Quiero Creedence is a mixed bag.  A few of the covers are revelations.  Others are the worst sort of bar band dreck.  Participants include Juan Gabriel, Billy Gibbons and Los Lobos.

(Original image by There Stands the Glass.)
Posted by Happy In Bag at 10:10 AM 1 comment: