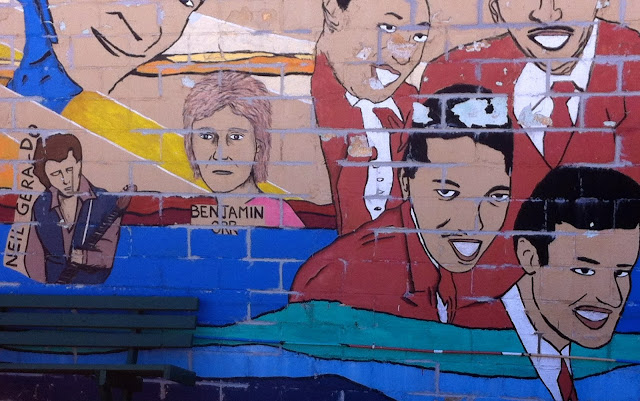 The disorienting sense that my recent reality is actually an extended waking dream was heightened by my experiences in an odd little town at Lake Erie last week.

Soon after I checked into a 1950s-style motel, I heard a band performing nearby.  A stellar version of "The Weight" sounded as if it was being played by the Avett Brothers.  I quickly made the one-block walk to the biker bar that was hosting the band.

The musicians- a motley crew of middle-aged rockers in sequins and blue jeans- wasn't much to look at.  And they didn't sound good in close proximity either.  The band launched into a bevy of Lynyrd Skynyrd, Allman Brothers Band and Molly Hatchet covers when I grabbed a seat.  Several bikers played air guitar to "Dreams I'll Never See".  I washed down a sandwich prepared by Chef Mic with a couple beers as I observed the surreal scene.

As I tried to collect myself back at the motel, the band transformed again as it launched into a series of excellent covers of frat-rock songs like "Expressway to Your Heart."  Wake me up when it's over.

---
Yet another piano trio!  I reviewed the Paul Shinn Trio's Reason Pure at Plastic Sax.

---
The Numero Group published the track listing of its new Eccentric Soul: The Forte Label compilation.

---
Yeah, I watched MTV's VMA show on Sunday.  Pontificating on drummed-up controversies isn't my thing.  The fact that not a single rock or EDM act performed at the event is far more interesting to me than the calculated shenanigans of pop stars.

---
The new releases of the most interest to me this week include titles by Avenged Sevenfold, Belle & Sebastian, Big Sean, Black Joe Lewis, Devil Driver, Franz Ferdinand, Robbie Fulks, Goodie Mob, Juicy J, Lorde, Maps for Travelers, Dent May (see above), Pieces of a Dream and Quiet Corral.

(Original image by There Stands the Glass.)
Posted by Happy In Bag at 9:34 AM 2 comments: 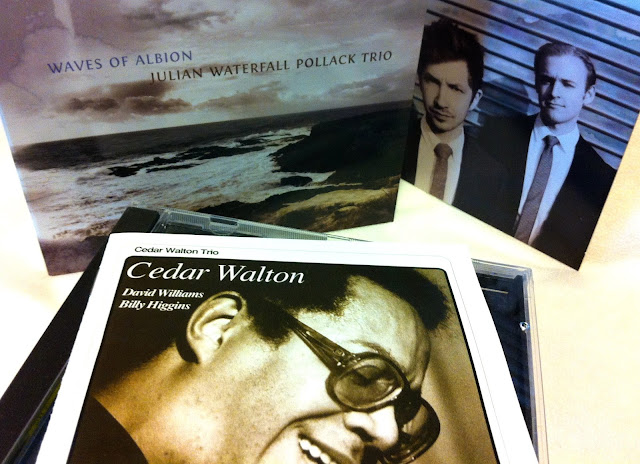 For a guy who claims to have had his fill of piano trios, I'm spending a lot of time listening to the format in 2013.  The passing of Cedar Walton served as a bittersweet excuse to dig out a few of the pianist's recordings from the Museum of Dead People located in my dusty basement.  Hearing Walton work with David Williams and Billy Higgins on the sublime Manhattan Afternoon soothed my troubled soul.

Walton's lyrical work helped me gain an even deeper appreciation of Waves of Albion, the excellent new album by Julian Waterfall Pollack.  Pollack and his colleagues don't attempt to replicate the work of Walton, Williams and Higgins.  Instead, they work in the entirely different conception associated with Brad Mehldau and Esbjörn Svensson.

With Waves of Albion, Pollack contributes something new to the stylish sound of the new millennium.  A sense of deep spirituality pervades the album.  Elegiac versions of "Amazing Grace" and "Shenendoah" serve as its emotional core.  Jazz pianists including Duke Ellington and Mary Lou Williams have explored sacred music.   Yet to my knowledge, Pollack is the first of the new wave of pianists to explore religious themes.

While the title of "I Don't Believe In Love Anymore" indicates that Pollack had other things on his mind as he composed the mournful piece, I hear it as a spiritual elegy.  Even a cover of Bon Iver's "Flume" sounds like a devotional exploration.  As with the recordings of Mehldau and Svensson, the sound field of Waves of Albion places each musician on equal footing.  Bassist Noah Garabedian propels each selection with no less force than Pollack or drummer Evan Hughes.

How sweet the sound, indeed.

---
"Scars" is the latest video from Krizz Kaliko.

---
I've only listened to Earl Sweatshirt's Doris twice.  It's going to take time to decide if the dense album is a classic, a disjointed mess or merely an interesting experiment.  RIYL: Bob Dylan, OFWGKTA, The Chronic.

---
King Krule's "Easy Easy" picks up where the Jam and the Arctic Monkeys left off.  (Tip via S.S.)

---
My friend at The Daily Record turned me on to Terrace Martin's 3ChordFold. Guests include Kendrick Lamar, Robert Glasper and Snoop Dogg.  The lush production is recommended to fans of those artists.

---
A recent interview with Orrin Keepnews about the early days of Riverside Records is pretty great.

---
Minimal research alert. Good Vibrations appears to be a movie about the Undertones, the troubles in Ireland and a music retailer.

(Original image by There Stands the Glass.)
Posted by Happy In Bag at 2:09 PM 4 comments: 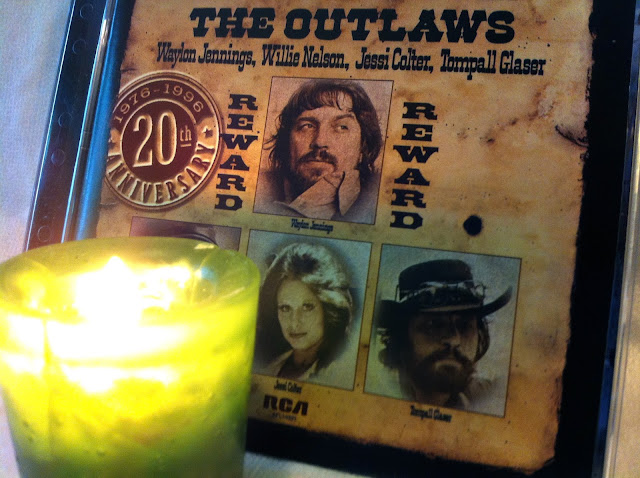 My dad wore out the grooves of Wanted!: The Outlaws.  The album resounded hundreds of times in our home in the years following its release in 1976.  I relished the repetition, although I was a little creeped out by the lusty way my dad sang along to the songs about women.  Tompall Glaser, one of the four artists featured on the compilation, died Tuesday.  Glaser's rendition of "T For Texas" was my introduction to Jimmie Rodgers.  Put another log on the fire.

---
Bowinero's Asterism is recommended if you like Antennas Up, Modest Mouse, Young the Giant.

---
Antennas Up has a new video for The Awkward Phase".

---
Red Kate's When the Trouble Comes is RIYL: the Big Boys, the Wipers, Naked Raygun.

---
The video for Tech N9ne's "Party the Pain Away" is what you thought it was.

---
Dolls on Fire created a video for "Fem vs the Volcano".

---
Tim Finn checks in with Matt Pryor of the Get Up Kids.

---
I'm glad hundreds of thousands of people are excited about Kendrick Lamar's explosive verse on Big Sean's "Control."  I dig it too.  A similar reaction supposedly greeted Coleman Hawkins' famous solo on "Body and Soul" in 1939.  My ongoing fantasy is that a similar number of active music lovers will lose their collective minds over a new solo by someone like Rudresh Mahanthappa.

---
Thanks in large part to the contributions of Julian Lage, Gary Burton's Guided Tour is one of my favorite jazz albums of 2013.  Here's the EPK.

---
Music critics occasionally know what they're talking about.  Ka's The Night's Gambit is every bit as good as the scores of breathless reviews suggest.  RIYL: Ghostface Killah, Rakim, Cut Chemist.

---
The National's set at last weekend's Outside Lands festival featured the Kronos Quartet and Bob Weir. My interest in the mopey band is renewed.

---
Trillwave 3 is the deliriously fun new mixtape by mashup masters the Hood Internet.

---
I'll eventually get around to listening to this week's new releases by Glen Campbell, Bela Fleck, Valerie June, K. Michelle, Stevie Stone, Washed Out and Barrence Whitfield and the Savages.

(Original image by There Stands the Glass.)
Posted by Happy In Bag at 10:27 AM 2 comments:

I'm going through some extremely difficult stuff at the moment.  While my first instinct is to throw a pity party while I put soul tracks like "I Wish It Would Rain" on repeat, I'm using Revocation's new self-titled album to help me work out a bit of my frustration.  The Boston-based band has created one of the year's most devastating albums.  The opening track "The Hive" is representative of the project.  It's brutal music for bleak times.


---
George Duke has died.  I recently wrote about Duke here and here.

---
Christian McBride's first album of 2013 didn't do anything for me.  I'm hoping for different results from his new Out Here release.  Here's the EPK.

---
CSS turned me on to As Mercenárias in their charming episode  of "What's In My Bag?"

---
The Flaming Lips and Animal Collective are participating in Cassette Store Day.  Of course they are.

---
Here's a video for "Of Many, One", a track from the forthcoming album by Brian Haas and Matt Chamberlain.  RIYL: the Jacob Fred Jazz Odyssey, Critters Buggin, Philip Glass.

---
One of my preachers is also a folk singer.

(Original image by There Stands the Glass.)
Posted by Happy In Bag at 4:15 PM No comments: 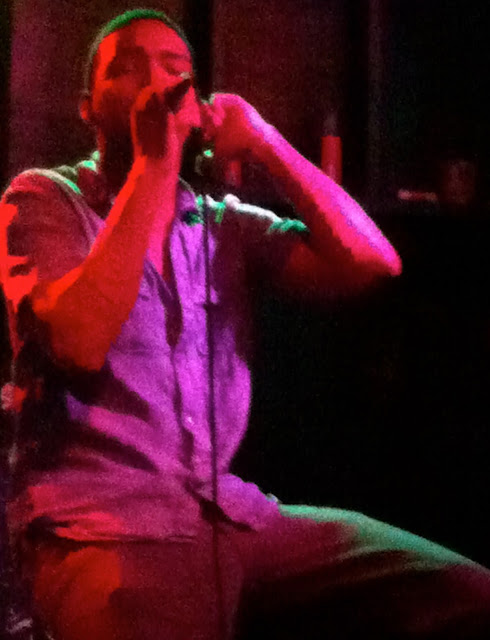 The annual Pitch Music Showcase is one of my favorite events of the summer.  Friday's party was no exception.  Here are the three best things I took in during the three-and-a-half hours I spent in Westport.

1. Gee Watts at the Riot Room patio
I was charmed by the way in which the young rapper adapted his performance to the pitifully meager audience of about a dozen members of his entourage and 20 unrelated onlookers.  He set the tone by referring to the intimate setting as a "poetry reading."  Although he performed a few off-color selections like "Nasty", his low-key delivery on wrenching material like  "Premature Hate" floored me.  Between selections, Watts shared his views on God, capitalism and friendship.  He even broke down one or two of his songs in the style of Rap Genius.

2. La Guerre at the RecordBar
I've seen Katlyn Conroy perform several times as a member of Cowboy Indian Bear.  I've also enjoyed her recordings.  Not until I witnessed her sing for about a dozen people at the RecordBar, however, did I grasp that her voice is a truly magnificent instrument.

3. Info Gates at the Riot Room patio
Info Gates, a hip-hop producer, songwriter and performer, was joined by Ubiquitous, Godemis and Les Izmore.  It looked and sounded a lot like this.


---
I reviewed Saturday's concert by the Killers, Queens of the Stone Age, Gogol Bordello and the Virgins.

---
Strange Music continues to crank out product.  "Why Me", is a track on Krizz Kaliko's new Son of Sam album, his fifth in six years.

---
Mills Record Company provides a nice analysis of the significance of the Get Up Kids' Four Minute Mile.

John Velghe & the Prodigal Sons appear at Knuckleheads on Thursday.

(Original image of Gee Watts by There Stands the Glass.) 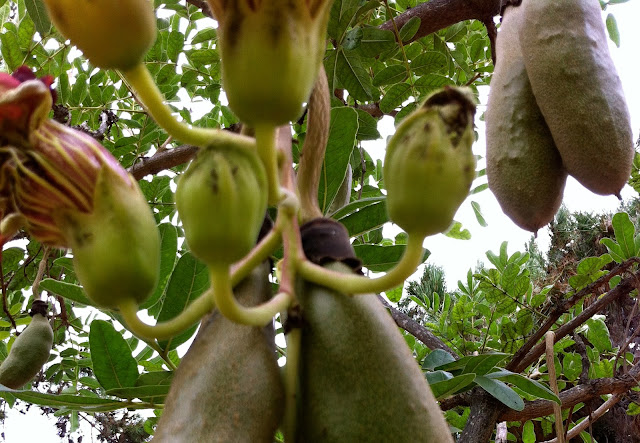 Brazil Classics 1: Beleza Tropical changed my life 23 years ago.  I had been only vaguely aware of Jorge Ben, Gilberto Gil and Caetano Veloso prior to purchasing the David Byrne-curated CD.  Hearing a handful of their most accessible songs on a single set opened my ears to a universe of sounds.  I feel much the same way about the new compilation Daora: Underground Sounds of Urban Brasil.  The lengthy album contains contemporary hip-hop, funk, post-MPB, indie rock, Afrobeat and reggae of Brasil.  About a third of it is astoundingly great.  Having only been aware of a handful of the featured artists, I've embarked on a delightful new journey of discovery.

---
I reviewed Tuesday's concert by the Postal Service and Mates of State.

---
Serj Tankian sings the hook on Tech N9ne's "Straight Out the Gate".

---
Minden's video for "What's More Than Appropriate?" transfixed me.  The Way Back's video for "Terrified" is less ambitious.

---
I tried to get into F**k Buttons, but all I hear is a stylish version of Trans-Siberian Orchestra.

---
Homebodies will be able to watch live streams of this weekend's Lollapalooza, Pickathon and Newport Jazz festivals.

---
"I'm up against brass cleaning!"  Footage of Action Bronson's appearance at an old folk's home makes me smile.