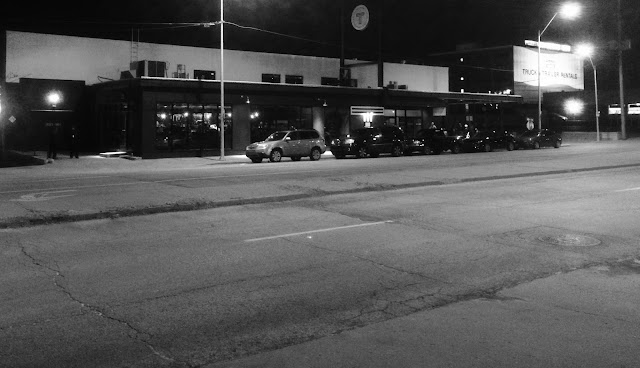 Drive-By Truckers gave a 1,000 rubberneckers an unflinching tour of "Buttholeville" on Friday.  Hearing the Southern rock band tear into the song about a desperate man cleared the cobwebs in my head, snapped me out of a post-vacation malaise and restored my faith in rock and roll.

While I wasn’t quite as forlorn as the resident of “Buttholeville” who is “tired of my job and my wife Lucille, tired of my kids Ronnie and Neil” and fantasizes about the “day I'm gonna get out of Buttholeville, gonna reach right in, gonna grab the till, buy a brand new hat and a Coupe de Ville” when I bought a $28 ticket at the Truman, I was in a pitiful state.  Unshowered, unshaven and feeling like the meanest man in Kansas City, I was questioning my decision to hear similarly grizzled middle-aged men play outmoded music.

Yet when Patterson Hood hugged his bandmates at the conclusion of the wooly rendition of “Buttholeville,” I was inclined to jump the barrier to embrace the Alabama man for not only redeeming my night, but for redirecting me to the path of righteousness.

---
Chris Dave and the Drumhedz is the initial viable contender for my favorite album of 2018.  RIYL: Erykah Badu, sidemen made good, Anderson Paak.

---
An outing by the Marmozets was my #14 show of 2014.  The new album Knowing What You Know Now nearly replicates the band’s ferocity.  Here’s "Major System Error".  RIYL: Bring Me the Horizon, convulsions, early Paramore.

(Original image by There Stands the Glass.)
Posted by Unknown at 11:43 AM No comments: 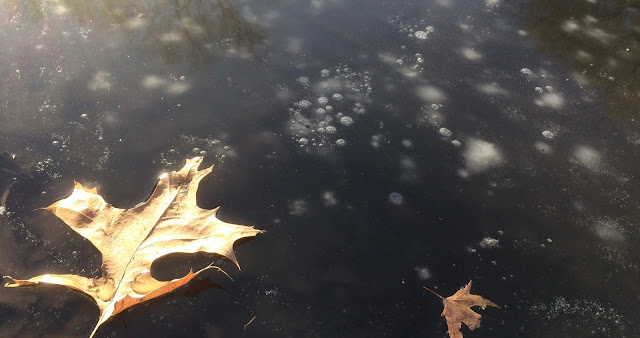 My professional affiliation with the Kansas City venue Green Lady Lounge isn’t a secret.  Nor do I attempt to hide my ambivalence about the organ-based orientation of the bookings in the jazz club’s main room.  While I genuinely enjoy some of the organ jazz specialists who regularly appear at Green Lady, I rarely listen to the form for pleasure.  My passion for organ jazz began and ended during the era in which Milton’s served thirsty underaged punks who were eager to be schooled on the likes of Jack McDuff by the scofflaw bartenders who manned the dive’s turntable.  Yet Organ Monk Blue, a bracing new album by organist Gregory Lewis, guitarist Marc Ribot and drummer Jeremy "Bean" Clemons, is anything but stale.  The reckless trio makes Monk sound wonderfully strange again.

---
I featured Lonnie McFadden in my weekly segment for KCUR.

---
Hugh Masekela has died.  It’s possible that “Grazing in the Grass” was the first jazz-oriented song I encountered as a child.

---
Mark E. Smith has died.  I distinctly remember the hullabaloo that accompanied the release of the Fall’s Live at the Witch Trials in 1979.  I never bought in.

---
Sir shamelessly cribs Miguel and Frank Ocean on the solid November.  I can’t say I blame him.  Here’s “Summer in November”.

---
I’m embarrassed by how easily I was seduced by the deliriously gimmicky pop songs on The Go! Team’s Semicircle.  Here’s “All the Way Live”.

---
When I went through a funk-punk phase in the early 1980s, I subjected everyone around me to the Contortions, the Bush Tetras and James “Blood” Ulmer.  Shopping revives the style on The Official Body.

(Original image by There Stands the Glass.)
Posted by Happy In Bag at 5:58 PM 1 comment: 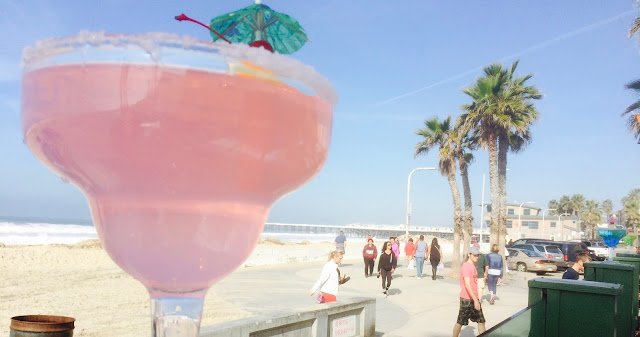 I watched surfers from a beachside dive while on vacation in San Diego yesterday.  The soundtrack was similar to the sounds I’d heard at multiple Southern California establishments this week.  Rather than irritating me as they do when I encounter them in my Midwestern home, new millennium reggae songs from the likes of  Rebelution, Sbid, Iration and Damian Marley tickled my ears in an unfamiliar way.  Otherwise subdued barflys banded together for a hearty singalong when the 311 hit “Amber” popped up on the playlist.  I may have joined in.


---
I shared tracks by Deborah Brown, Matt Otto with Ensemble Ibérica, Samantha Fish, Lee Ann Womack, Future and Alejandro Fernández on a KCUR program titled “From Kansas City And Beyond, The Best Music Of 2017”.  Bonus: I made a case for Rich the Factor as my favorite Kansas City artist.

---
“Fast” Eddie Clarke of Motörhead and Fastway has died.

---
Dolores O’Riordan of the Cranberries has died.

---
The press materials for Suss’Ghost Box imply that the New York group’s “ambient country” concept is groundbreaking.  It’s not.  Calexico, Bill Frisell and B.J. Cole are among the artists that have previously explored the Ennio Morricone-influenced terrain.  That observation doesn’t mean that I don't take enormous pleasure in Ghost Box.

---
I intended to bail on Anderson East’s Encore until I recognized the opening lyric of the album’s fifth song.  His surprising cover of Ted Hawkins’ “Sorry You’re Sick” is a nice surprise.  Even so, does the world need another painfully sincere blue-eyed soul singer in the vein of Ray LaMontagne, Allen Stone and Amos Lee?  Here’s
“Girlfriend”.

---
”Do you like it hardcore?” Yes, Fools Gold and Masayoshi Iimori, I do.

---
Umphrey’s McGee’s It’s Not Us is a typically frustrating affair.  The jam band is best during noisy freakouts that evoke King Crimson’s Discipline.  The group is intolerable when it sounds like a third-tier version of the Police.

---
I’m invariably delighted on the rare occasions when I encounter a music enthusiast who is even geekier than I.  Cole Cuchna pores over every note and lyric of Kanye West’s My Beautiful Dark Twisted Fantasy on the second season of his Dissect podcast.

(Original image by There Stands the Glass.)
Posted by Happy In Bag at 11:25 AM No comments: 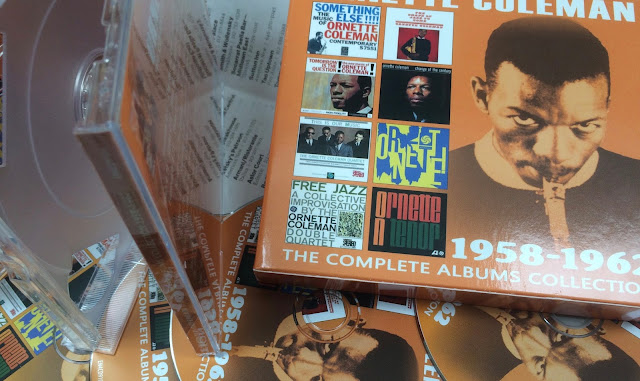 I’ve long been curious about the ludicrously cheap European reissues of classic American jazz material.  My recent purchase of Complete Albums Collection: 1958-1962 allowed me to examine the quality of the packaging and sound of one such release.  The four CD set consisting of Ornette Coleman’s first eight albums set me back $11.99.  I didn’t really need it- I already owned physical copies of several of the albums and each is available on streaming services- but the price proved irresistible.  The skimpy liner notes don’t supply song credits, but Coleman’s co-conspirators including Don Cherry and Charlie Haden come through loud and clear on the wholly acceptable sonics that are housed in a surprisingly sturdy jewel case.  As I rang in the new year with five hours of crucial skronk that was recorded before I was born, I was struck by the marginalization of Coleman’s innovations.  Aside from an occasional rendering of “Lonely Woman,” I almost never detect Coleman’s influence emanating from a bandstand in Kansas City.

---
I named Edison Lights the KCUR Band of the Week.

---
Tim Finn quoted my 2016 review of a Bonnie Raitt concert in a story about her upcoming tour with James Taylor.

---
Maurice Peress has died.  From his obituary in The New York Times: He led the Kansas City Philharmonic from 1974 to 1980, which proved to be an unhappy period. “The audience didn’t want to hear much new music,” he told The Christian Science Monitor in 1989. “I would introduce a new piece, and they would start booing and hissing.”

---
Ironic listening is one of my pet peeves.  Even so, I can’t stop marveling at this hellish Brazilian knockoff of Herb Alpert & the Tijuana Brass.

---
I had hoped that it would have cleared up by now, but I'm still infected by an unhealthy obsession with Tigran Hamasyan. The odd tone poem “Rays of Light” is from the prolific maverick’s next album.

(Original image by There Stands the Glass.)
Posted by Happy In Bag at 1:50 PM No comments: 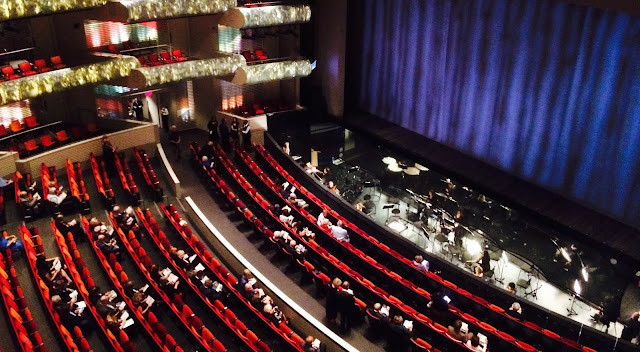 I celebrated when I purchased a half-price seat in the front row for Philip Glass’ appearance at the Kauffman Center for the Performing Arts in 2012.  In hindsight, I should have shed a tear.  The necessity to sell tickets to a recital by one of the most celebrated living composers at a steep discount may have triggered a shift in the tenor of the Kauffman Center Presents bookings.  Concerts by the prestigious likes of Glass have been replaced by the most middlebrow fare imaginable.  Forthcoming bookings include the soft rock master Peter Cetera, the former country hitmaker Sara Evans, the kitschy “Riverdance- The 20th Anniversary World Tour” and the Glenn Miller Orchestra ghost band.

Concerts by Johnny Mathis, Engelbert Humperdinck, the Oak Ridge Boys, Frankie Valli, Patti LaBelle, Kenny G, Michael McDonald, Kansas, Blondie, David Sanborn and Jethro Tull’s Ian Anderson have also been part of the Kauffman Center Presents series in recent years.  (Appearances by Sweet Honey in the Rock and Herbie Hancock have been among a handful of welcome exceptions to the banal bookings.)  I don’t have a fundamental objection to any of those artists.  In fact, I gladly attended a handful of the shows.  Cheese- particularly when marinated in nostalgia- can be delicious.  It’s what’s not being booked at the Kauffman Center for the Performing Arts that saddens me.

While the Lyric Opera, the Kansas City Symphony, the Kansas City Jazz Orchestra and the Harriman-Jewell Series regularly present substantial fare on the magnificent venue’s two stages, I harbored high hopes for the Kauffman Center’s in-house presentations.  Before the Kauffman Center opened, organizers intimated that it would usher in a new era of elevated arts in Kansas City.  The ambitious experiment didn’t last long.  I once expected to attend concerts by heralded geniuses such as Nico Muhly, Sonny Rollins and Gilberto Gil.  Instead, I’ll have to make do with ”Glory of Love”.

---
I named the Chris Burnett Quintet the KCUR Band of the Week.

---
I pondered the alarming lack of critical attention for Kansas City’s jazz artists at Plastic Sax.

---
A few of the distressing developments addressed in an essay by Libby Hanssen have also impacted my work.

(Original image by There Stands the Glass.)
Posted by Happy In Bag at 5:12 PM 1 comment: