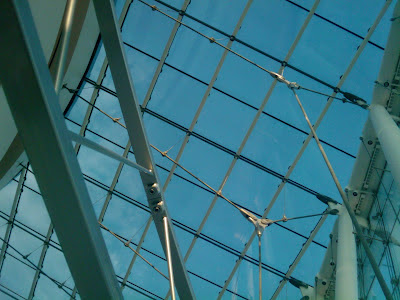 Libby Hanssen and Nathan Clay Barbarick wrote proper reviews of Philip Glass' concert Tuesday at Helzberg Hall. Here are a few observations from my vantage point in the front row (only $30!):

*The great composer isn't exactly the world's most precise pianist. I found his warts-and-all playing endearing.

*Glass begins playing the instant he seats himself at the piano bench.

*The thirty-two minute solo violin piece performed by Tim Fain was a bit much. I get it- Glass' signature style remains even when he intentionally evokes Bach. And yeah, it sounds really cool on violin. Even so, fifteen minutes of that exercise would have been plenty.

*Set to Alan Ginsberg's disembodied voice, "Wichita Vortex Sutra" was the clear highlight of the concert.

*I assume Glass' use of amplification was an aesthetic decision. As the other critics implied, hearing Fain's breathing through his mic'ed violin was awkward for everyone, especially for Fain.

*I attend a lot of live music events, including plenty of classical concerts. Yet I'd never laid eyes on almost half of Tuesday's audience of about 1,000. I wondered if the entire staff and student body of a small Midwestern art school had been bused in for the concert.

*By the way, what's with the empty seats, friends? It's Philip F*cking Glass!

---
Speaking of covers, an aspiring jazz chanteuse should use a savvy version of "The Ghost In You" to launch her career. Underneath the dated production is an amazingly solid song.

---
I had high hopes for the new release by BadBadNotGood. The idea of trash-talking jazz kids with a thing for hip hop is enormously appealing. Unfortunately, the band is merely adequate. In its best moments, BBNG sounds like a decent The Bad Plus cover band. At its worst, BBNG2 could be mistaken for a shreds parody. I don't know if it's a good or bad thing that BBNG's latest video has over 60,000 views in 48 hours.

---
Kansas City Click: I can't pretend that there aren't a lot of bands at the Middle of the Map festival that don't appeal to me. (My notes on ten acts are published here.) Still, I'm tremendously excited about the opportunity to catch a couple dozen of the featured musicians.

(Original image by There Stands the Glass.)
Posted by Happy In Bag at 7:11 AM