It’s not him, it’s me.  Many of my insightful peers insist that Elvis Costello’s Look Now is his best album in more than a decade.  While they’re probably right, I’m just not in a proper frame of mind to appreciate his baroque throwback pop.  There’s simply too much free jazz, contemporary pop, African funk, Chicago footwork and grimy hip-hop demanding my attention at the moment.  I look forward to revisiting Look Now when I’m in rocking chair mode.  RIYL: Burt Bacharach, Dionne Warwick’s greatest hits, Jimmy Webb.  Here’s “Suspect My Tears”.


---
I reviewed a concert by Bob Seger and Blue Water Highway for The Kansas City Star.

---
I reviewed a concert by Twenty One Pilots, Awolnation and Max Frost for The Kansas City Star.

---
Patrick Mathé, the founder of New Rose and Last Call Records, has died.  (Tip via SS.)

(Original image by There Stands the Glass.)
Posted by Happy In Bag at 7:44 AM No comments: 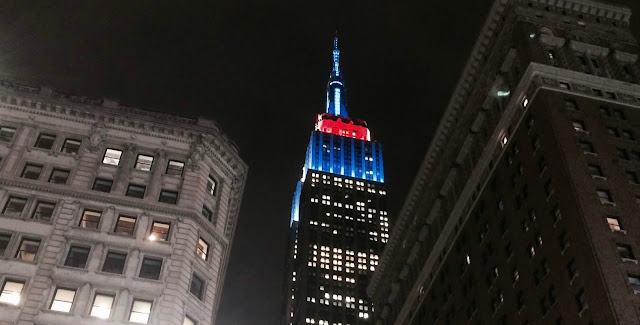 Appreciation of laudable art is often hard won.  I almost gave up on Leikeli47’s Acrylic when references to high fashion on the eighth selection “Post That” and Greek life at H.B.C.U.s on the sixth track “Roll Call” (a knockoff of T.I.’s 2003 hit “Rubber Band Man”) irritated me the first time I played the album.  The mind-bending production compelled me to stick with Acrylic.  My perseverance paid off.  Repeated plays of the wide-ranging album revealed that the extremely bright, audaciously funny and vigorously feminist New York rapper is as wonky as Dessa, as accessible as Brandy and as deliriously unhinged as Cardi B.  Yet it’s the consistently surprising sonic textures that include pure pop, murky grime, lovely R&B and spare footwork that make Acrylic one of my favorite albums of the year, even if it took some time to get my head around it.   Here’s “Girl Blunt”.


---
My review of Ernest Melton’s The Time of the Slave Is Over is at Plastic Sax.

---
Roy Clark has died.  Not only was Hee Haw a big part of my cultural education, I recall seeing a few of his albums in my dad’s collection.

---
Even though the Rubberband EP consists of five remixes of a single Miles Davis track from a suppressed 1985 session, the repetition never becomes stale.  Context for the oddly compelling project is available here.

---
The most surprising aspect of Rudy Royston’s Flatbed Buggy is that the drummer’s frequent collaborator Bill Frisell doesn’t make an appearance.  Even so, the worthy project fits squarely in the instrumental folk-jazz realm associated with the guitarist.

(Original image by There Stands the Glass.)
Posted by Happy In Bag at 3:48 PM 1 comment: 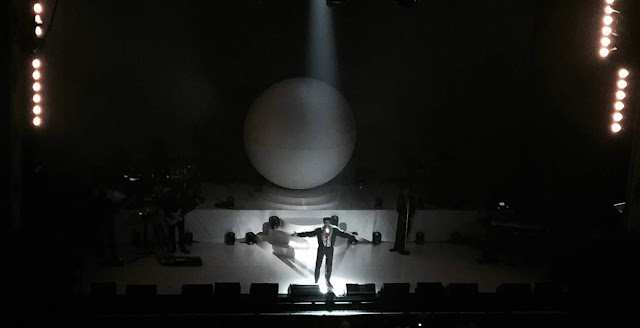 Accompanied only by her keyboard and an intrusive hype man, Ambrosius ran through a handful of old favorites and excellent new material like “Luh Ya”.  I was disappointed that she entertained only 30 minutes but I was absolutely infuriated when Maxwell and his six-piece band walked off the stage after playing 90 minutes.

Maxwell’s 2008 concert at the Uptown Theater in Kansas City is one of the most rousing exhibitions of soul music I’ve witnessed, and I’ve attended shows by legends including James Brown, Marvin Gaye, Isaac Hayes and Prince.  My glowing memory of his 2008 appearance caused me to merely flinch when I discovered that the least expensive ticket at the door last night was $60.

I barely got my money’s worth.

I was among the majority of the people in the “cheap” seats who never stood to dance during the 32nd installment of Maxwell’s 50 Intimate Nights tour.  Anticipating transcendence, I settled for satisfaction.  The absence of a horn section was a nasty surprise, but I was gutted that the setlist didn’t include “We Never Saw It Coming”, a protest song that's the “What’s Going On” of our time.

As much as I love Maxwell’s party material like “Sumthin’ Sumthin’”, “We Never Saw It Coming” is the type of song that differentiates Maxwell from hackneyed nostalgists.  I love Maxwell partly because he’s not a corny mimic of old-time R&B.  He keeps the music vital by giving it a contemporary edge even as he honors soul’s traditions.  Sadly, Maxwell’s concert at the Midland was slightly stale. 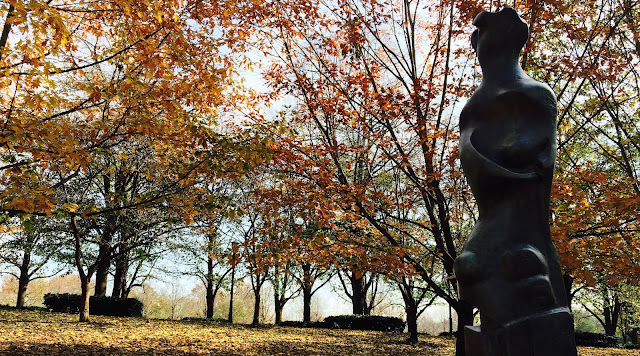 Leaf blowers and Pillars are incompatible.  My plan for the daylight hours last weekend was to absorb Tyshawn Sorey’s four-hour epic while doing yard work.  The rudimentary process of gathering and bagging the deep bed of leaves that covers my yard would have allowed me to focus on the intricacies of Sorey’s new triptych.

Equipped with blaring leaf blowers, my diligent neighbors glared at me as I made my first attempt of the season to clear my yard with a rake.  The infernal racket of their machines drowned out the hushed segments of Pillars.  I retreated indoors.  Hearing Sorey’s crucial work is far more important to me than keeping up appearances.  Although Sorey is best known in jazz circles, Pillars is in the tradition of classical-based compositions by the likes of Anthony Davis and John Cage.

The irony of my travails: a few of the most abrasive passages of Pillars resemble the grating drone of leaf blowers.


---
Recently at Plastic Sax: I reviewed OJT’s New Originals for the Green Lady and experienced an astonishing epiphany at the Kansas City debut of Kamasi Washington.

---
Unlike many jazz devotees, I don't revere Roy Hargrove.  I was nonplussed the first time I saw him at a St. Louis club in the early 1990s.  And he was a mess the last time I caught him at the 2014 edition of the 18th & Vine Jazz & Blues Festival.  When he was on, however, Hargrove was among the best artists I’ve witnessed.  I reviewed Hargrove’s band at the Folly Theater for The Kansas City Star, a show that I ranked second on a list of my favorite concerts of 2007.  Hargrove died November 2.

---
The Residents’ Hardy Fox has died.

---
Elle King often sings about the people who do her wrong.  She should direct her righteous fury at the knob-twiddlers responsible for the wrongheaded production of Shake the Spirit.  Much as the recordings of Fitz and the Tantrums sterilize the band’s retro-soul attack, Shake the Spirit is rendered lifeless by a sound field that makes her Wanda Jackson-esque attack sound like Pat Boone.  Here’s “Shame”.

---
Even though I have little patience for astrology, Nao’s pseudo-science themed Saturn captivates me.  RIYL: Janet Jackson at her weirdest, horoscopes, Frank Ocean at his most conventional.  Here’s “Make It Out Alive”.

(Original image by There Stands the Glass.)
Posted by Happy In Bag at 10:15 AM No comments:

The Top Ten Albums of 2018 by Kansas City Musicians 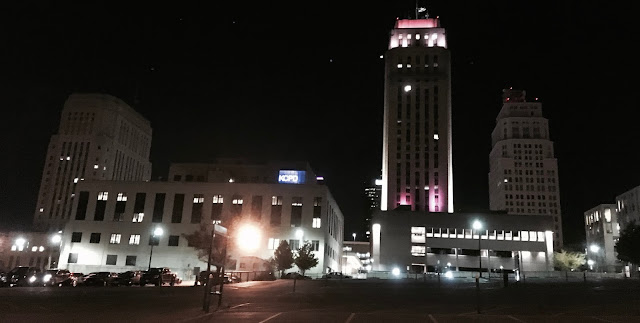 Musicians associated with Kansas City released dozens of albums in 2018.  A few of the most prominent projects aren’t included here.  Rather than acting as a barometer of parochial groupthink, my list contains the ten albums with the most artistic merit.

2. Kelly Hunt- Even the Sparrow

(Original image by There Stands the Glass.)
Posted by Happy In Bag at 10:35 AM No comments: 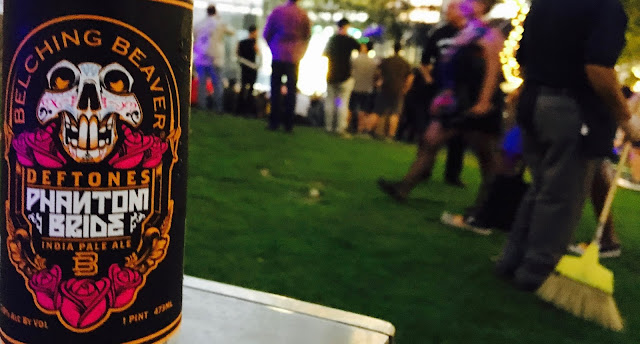 I’ve limited myself to a single live music event during my second honeymoon in San Diego.  But man, what a show!  Dia de los Deftones, a festival curated by hometown heroes Deftones, was held just beyond the outfield of Petco Park and spilled over into a street adjacent to the baseball stadium on Saturday, November 3.

Complications with a rideshare caused me to miss the opening act Vowws, but Vein’s ferocious attack on the secondary stage made me feel a lot better about skipping the 2018 edition of Warped Tour.  The cool kids insisting that Vein is one of rock’s best hopes may be right.  Ho99o9, an industrial rock/rap trio in the style of Death Grips and Injury Reserve, was even better.  Failing to get hurt after getting swept into the mosh pit a couple times confirmed my sense that I’m living the life of Riley.

I’ve never managed to get into Rocket From the Crypt.  The veteran San Diego band received a cold shoulder from Deftones fans who shared my indifference.  I felt sorry for Mike Shinoda.  Not only did the music of the cofounder of Linkin Park ironically resemble second-rate Twenty One Pilots, his tribute to his late bandmate Chester Bennington was a major buzzkill.

The set by Future was easily the best effort I’ve witnessed by the rap superstar.  He’s floundered the past couple times I’ve seen him but Future did his best to engage the audience of approximately 5,000.  Unlike Future, Doja Cat didn’t have any baggage to overcome.  The immensely likable Cardi B knockoff gamely delivered her risque material including the hilarious novelty hit "Mooo!".

I had so much fun bouncing between the two stages for six hours that I forgot to eat.  Unfortunately, I remembered to down three Belching Beaver lagers introduced at the festival.  Overcome by a sudden wave of hunger when Deftones hit the main stage, I couldn’t enjoy its headlining appearance.

(Original image by There Stands the Glass.)
Posted by Unknown at 8:52 AM No comments: