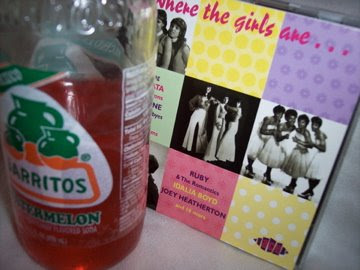 Twin forces of nature Estelle and Solange played one of the most enjoyable shows in recent memory last night. As this review notes, not many people saw it.

It's a shame- there should be a massive audience for an indie rock show masquerading as an R&B review. I told a friend that thousands of people will later claim to have been present; both women seem destined for huge success. And even if I'm wrong, there's a long and noble tradition of neglected girl groups.

Devotees of both Bruce Springteen and The Ramones will lose their minds when they hear this forgotten gem by Noreen Corcoran from 1963. Its riffs are more than a little familiar. "Love Kitten" is just one of 24 amazing songs on this girl-group compilation.

If a slice of brilliance like "Love Kitten" can miss, nothing is guaranteed for Estelle or Solange.

---
I couldn't stop staring at Rex Hobart Tuesday evening at The Record Bar. I had just realized that the honky tonk traditionalist bears an uncanny resemblance to rapper Mac Lethal. Have the two Kansas City-area residents ever been seen together?

---
Kansas City Click: Too Short is joined by local luminaries including Rich the Factor tonight at Club Dallas.

Kevin Mahogany returns to Kansas City for a Saturday gig at the Folly Theater.

The People's Liberation Big Band touches down at the Record Bar Sunday.
Posted by Happy In Bag at 1:10 PM No comments: 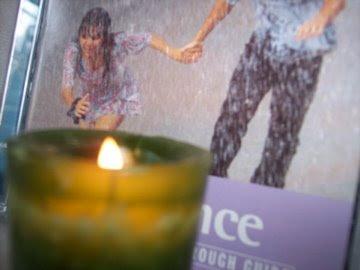 I delayed mentioning the death of Joe Cuba because I refused to accept that my existing collection didn't contain some of his music. I finally found a track on a fine compilation stored in a remote, mouse-infested corner of my basement. Anyone familiar with his music knows that it was worth the delay. If this rowdy and joyous selection somehow fails to sell you on Cuba's legacy, try watching this video. It's poorly lit but immensely life-affirming.

---
I caught The Blue Note 7 last week. Here's my review. I also reviewed a performance by Rufus Wainwright.

---
Kansas City Click: I intend to wheel my Fat Tuesday revelry around Rex Hobart's weekly matinee at the Record Bar.
Posted by Happy In Bag at 11:27 AM No comments: 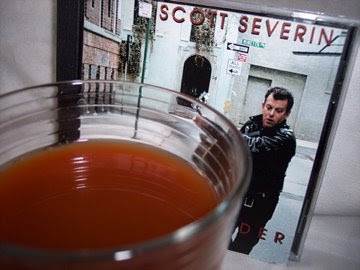 A significant portion of my life has been spent working in record stores. While I've reluctantly embraced the changes that have decimated the music retail community, I still wax nostalgic about the old days.

Not surprisingly, one of my first stops on a visit to Omaha earlier this week was the Homer's store on Howard Street. I instinctively began chatting up the guy behind the counter. We bonded over our mutual admiration of The Hold Steady, Bruce Springsteen and The New York Dolls.

I learned that my new friend was Scott Severin. He's a tough, gritty songwriter who paid his dues in New York. Little girls may not understand the craggy voice and street poetry of Severin's 2005 CD Unknown Rider. Similar-minded artists including David Johansen and Lou Reed, however, would surely recognize Severin as one of their own.

This video gives a sense of Severin's personality.

---
Kansas City Click: I spend a lot of time embarrassing myself. Last week I told a stranger how much I admire Kristie Stremel. The dude turned out to be the drummer for Exit 159. I vaguely recall the band but I had no idea it included Stremel. They reunite at the Record Bar tonight.

Rufus Wainwright entertains at The Uptown Theater on Saturday. 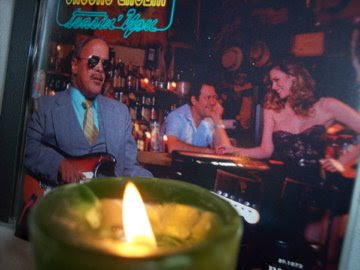 The recycled riffs and tedious boogie that dominate today's scene make it increasingly difficult to fondly recall the blues scare renaissance of the late '80s and early '90s. Yet much of the blues-based music produced in that era was, in fact, fresh and vital. The delightful "comeback" of Snooks Eaglin represents the best aspects of that vibrant period. Eaglin's guitar and vocal on this song from '92's Teasin' You demonstrate why his recordings and live dates were significant events. Here's a hilarious live performance. Eaglin died yesterday.

---
Kansas City Click: Pato Banton is supposedly at The Levee tonight.
Posted by Happy In Bag at 2:48 PM No comments: 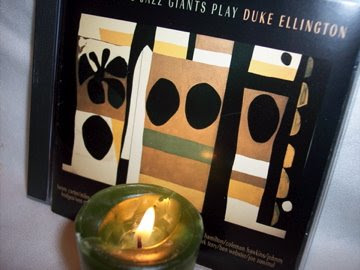 Luigi Paulino Alfredo Francesco Antonio Balassoni. What a name! Still, I understand why he shortened it to Louie Bellson. The great drummer died February 14. He enjoyed a long career as an elite drummer in part because he could play with the impeccable taste heard on this 1973 track from an Ellington compilation and also like the showy powerhouse on display in this nine-minute drum solo.

---
Jazz musicians Coleman Mellett and Gerry Niewood were passengers on Flight 3407. The music at their MySpace accounts reveal the unique talents of both men.

---
Trainspotters will note that Ellington's appearance here makes him only the third artist to be featured more than once in over 700 posts at There Stands the Glass.

---
Kansas City Click: Marah and Tony Ladesich are at the Record Bar tonight.
Posted by Happy In Bag at 10:50 AM No comments: 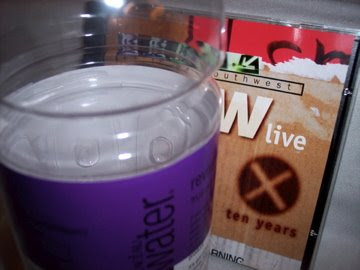 The subject of SXSW came up at last night's Twestival charity event. I've attended the annual conference in Austin about a dozen times. That admission inspired awe in a relative youngster. What he didn't understand is that SXSW once had a very different vibe. It wasn't always about Glasvegas, Iggy Pop and Blitzen Trapper. SXSW began as a regional roots-based festival. The first year I attended (was it 1989?) I caught almost nothing but folk, blues, outlaw country, tejano and root-rock acts. Artists like Betty Elders abounded. This song is pulled from a 1996 SXSW promo compilation. The gradual transition to an indie-rock orientation upset the old guard. The shift didn't bother me but I could do without the increased hassle factor.

---
Stik Figa Goes To College. That's what I would have titled the supposed final Stik Figa EP. Instead, it's named Babylon. It's available for download at Ill Roots. "Well its official...," the Topekan suggested in a recent blog post. "im takin' my black ass back to school come fall, cant believe i wasted so much time with this rap sh*t."

---
I love Blayney's. The staff is cool and the dingy bat-cave vibe has always appealed to me. Yet I rarely go there because the blooze band-oriented booking policy doesn't interest me. Even so, this report is quite upsetting.

B.B. King and Buddy Guy perform at the Midland on Valentine's Day.

Maze returns to Municipal Auditorium on Sunday.
Posted by Happy In Bag at 1:52 PM No comments: 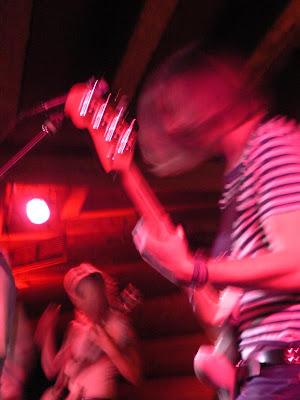 Not everyone can be Jack White. Even the most skeptical onlookers are forced to concede that the man is well on his way to rock'n'roll immortality. He's so talented that like-minded artists often pale in comparison. New York Rifles are a very fine garage-punk band. The Portland-based act (go figure) have a refreshingly trashy aesthetic accented by a vocalist who sounds disarmingly like Jello Biafra. "I Know a Girl" is from their forthcoming Make a Wish album. It may not be White Blood Cells, but it's plenty good enough for me.

---
Have you snagged the new Camera Obscura single? It's excellent. I'm still mad at the Scottish band, however, for delivering an inferior show at The Record Bar in 2007. (Tip via Wayward Blog.)

(Photo by Chris Perry.)
Posted by Happy In Bag at 8:46 AM No comments: 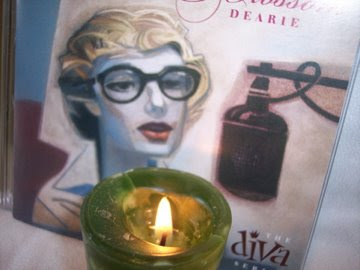 I love the adorable novelty songs of Blossom Dearie. Her playful cooing on signature material such as "Blossom's Blues"- "Ray Brown told me I was built for speed!"- never fail to make me smile. Yet she was no one-trick-pony. Just listen the sensitive and artful "Dance Only With Me" for proof. It's available on this indispensable compilation. This live video is also charming. Although Dearie died February 7, she'll live on in her recordings and in artists like Kansas City's Megan Birdsall.

---
The most interesting moments for me during last night's Grammy Awards broadcast came during the performance of "Swagger Like Us." I received several texts during the collaboration of superstars. "Trainwreck!" declared one pal. "This is a mess," wrote another. "Brilliant!" suggested a third friend. I agree with the last sentiment- I laughed with delight throughout the performance. It's amazing to me that in 2009 hip hop remains so polarizing.

---
Kansas City Click: Jason Goudeau exists; I've seen him. The trombonist may not have any internet presence, but he purportedly performs tonight at the Blue Room.
Posted by Happy In Bag at 11:52 AM 1 comment: 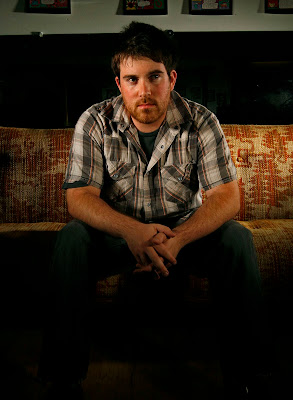 Do we all have attention deficit disorders? I sometimes wonder. This era of over-stimulation seems to require music that corresponds to the hyperactive zeitgeist. Chris Robley provides it on Movie Theatre Haiku. The impressive album veers wildly between styles and moods. Morphine, DeVotchKa, Harry Nilsson, The Get Up Kids, Nick Drake and Jeff Lynne of Electric Light Orchestra are among the dizzying array of artists Robley evokes. Here's a live version of "User-Friendly Guide To Change."

---
Some people believe that children should be seen and not heard. I believe that The Republic Tigers should be heard and not seen. Their shimmering album has rightfully received glowing praise. "Buildings and Mountains" sounds incredible on the radio. But their stifled performance last night at the Uptown Theater confirmed their reputation as an unimpressive live act. The reunion of headliners Ultimate Fakebook was better. Unlike The Republic Tigers, they inspired genuine passion and enthusiasm from their fans.

---
Although I never completely connected with The Cramps, I was surprised and saddened to learn of the death of Lux Interior. Here's "Human Fly".

---
Kansas City Click: The last time I saw Gil Mantera he was wearing nothing but boots and gold underwear. That's why you won't see me at the Record Bar tonight.

Seed Love is among the bands paying tribute to Bob Marley at Crosstown Station Saturday. 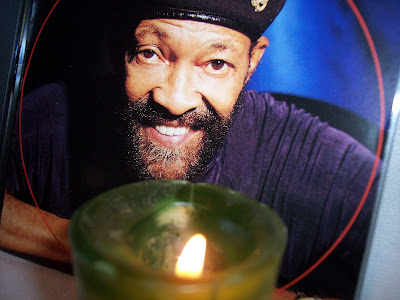 Just how important was Hank Crawford? David Sanborn's introductory comments in this video hint at the answer. Without Crawford's inspiration, the one-time television program host suggests, he probably wouldn't have pursued music. Sanborn speaks for countless saxophonists who modeled their sound in large part on Crawford's work with Ray Charles. Along with a select group of men including King Curtis, Red Holloway and David "Fathead" Newman, Crawford created the soul-blues-jazz hybrid that's now so fully absorbed into the musical mainstream that it's become a cliche. But don't blame Crawford. He remained soulful on his later recordings, as heard on this 2000 album. Crawford died last week. (Tip via BGO.)

---
Am I sexist? Racist? Xenophobic? A hip hop apologist? I'm shocked by the frank sexual content on Lily Allen's new album. The same language doesn't bother me nearly as much when it comes from a male American rapper.