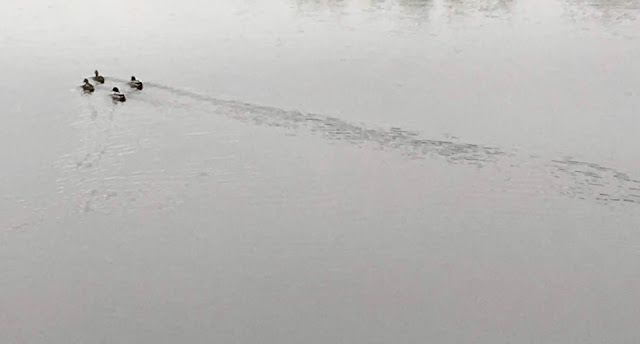 When she burst onto the international jazz scene a decade ago, I hailed Esperanza Spalding as The One, a bold, charismatic and visionary artist capable of reversing the flagging fortunes of the form.  Bad call.  Not only is much of Spalding’s work removed from jazz these days, her new album 12 Little Spells is one of the most noxious releases by a critically acclaimed artist in years.  12 Little Spells is so aggressively awful that tracks like “Readying to Rise” resemble parodies of frequently self-indulgent acts like Weather Report, Frank Zappa and King Crimson.  The only song on 12 Little Spells worth revisiting is “Touch in Mine”.

In a much more pleasant reassessment, I’ve come around to Cécile McLorin Salvant.  I long thought the hype surrounding the vocalist was unwarranted.  The critical darling struck me as fey, mannered and slight.  Just as my commendation of Spalding proved to be wishful thinking, I reckoned Salvant’s backers desperately needed her to be something she wasn’t.  The Window changed my mind.  Accompanied only by the spectacular keyboardist Sullivan Fortner on all but one song on the lovely album, Salvant shows that she likely merits a place in the pantheon of the most notable jazz and cabaret talents.


---
Tony Joe White has died.  “Polk Salad Annie” and “Rainy Night in Georgia” were essential components of the soundtrack of my childhood.

---
Wah Wah Watson, a guitarist for the likes of Marvin Gaye and Maxwell, has died.

---
I think I’m going to meet my maker every time I travel between Kansas City and St. Louis.  The Bottle Rockets document the white-knuckle experience on “Highway 70 Blues,” the second track on their new album Bit Logic.  The plaint includes this truism: “if you’re in a hurry to cross Missouri, things might not go as planned.”

---
Although he wasn’t on the bill, the Louisville bard Will Oldham was the most famous person I encountered at the Cropped Out festival earlier this month.  Oldham’s new solo acoustic set Songs of Love and Horror is RIYL Tom Rush, exposed nerves, Eric Anderson.

---
Wolfgang Muthspiel’s Where the River Goes is fine, but I was expecting so much more from the all-star collaboration.  The Austrian guitarist is accompanied by trumpeter Ambrose Akinmusire, pianist Brad Mehldau, bassist Larry Grenadier and drummer Eric Harland on a project that doesn't fulfill its promise.

---
The Dirty Nil’s Master Volume is a masterful evocation of rock bands ranging from Thin Lizzy to Wavves.  Here’s “That's What Heaven Feels Like”.

(Original image by There Stands the Glass.)
Posted by Happy In Bag at 8:04 AM No comments:

Look How Wrong You Can Be: Rod Stewart at the Sprint Center 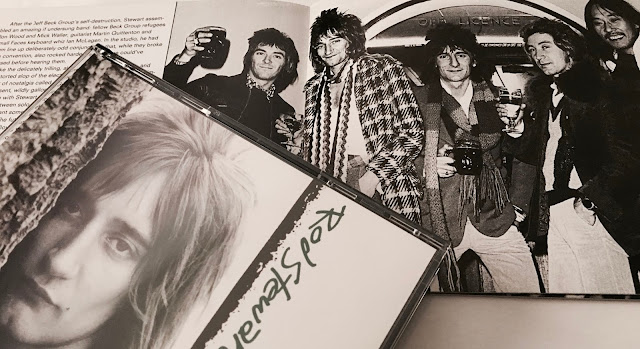 It seems ridiculous at this late date, but I once cared about Rod Stewart so much that I held a grudge against the star.  Even though I was a punk enthusiast in the late ‘70s, I still loved early Stewart albums like Every Picture Tells a Story.  I took his artistic change of direction exemplified by "Da Ya Think I'm Sexy?" as a personal affront.  I stopped caring about Stewart altogether twenty years ago.

My date and I regretted our impulsive purchase of $32 tickets as we drove to the Sprint Center last Tuesday, but Stewart immediately won us over.  Whether he was belting out classics like “Maggie May” or dodgy material like “Infatuation,” the preposterous antics of the unabashed ham were charming.  I didn’t hesitate to enthusiastically sing along to "Da Ya Think I'm Sexy?"

An older woman seated in front of us googled “Rod Stewart age” in an oversize font on her undimmed phone.  Her curiosity was understandable.  The lusty vigor displayed by Stewart, 73, is genuinely sexy.  I smiled the entire show.  Had he been able to see into the future, my 18-year-old self would have been mortified.  I never liked that kid much anyway.


---
I opted to post my review of Erykah Badu’s memorable concert at the Sprint Center at Plastic Sax.

---
Pilfered from my Twitter account: Joe Strummer lives! After raving about the combat rock of 6666 in a blog post on Tuesday, I paid $17 to catch Four Fists at the Riot Room last night.  I felt as if I was listening to the Clash’s Sandinista! for the first time.  The footage I posted to Instagram amuses me.

---
I’m looking forward to an imminent beach vacation.  Quebra Cabeça, the fourth album by the Brazilian Afro-funk band Bixiga 70, will likely provide the core of the sunny but slightly sinister soundtrack to my downtime.  Here’s the title track.

---
I’ve never understood why jazz artists continue to allow producers and engineers to intentionally make their albums sound as if they were recorded in 1956.  The rich sound field of Aaron Parks' Little Big demonstrates the virtues of embracing the fact that it’s 2018.  RIYL: Pat Metheny Group, volume, Brad Mehldau Trio.

(Original image by There Stands the Glass.)
Posted by Happy In Bag at 1:42 PM No comments:

Strummer 001, a recently released two-hour compilation of Joe Strummer rarities, confirms what I’d already knew.  The man who died in 2002 did his best work with the Clash.  Even so, hearing Strummer working out new ideas before and after his contributions to the seminal band is fascinating.  I hadn’t heard half of the 32 punk, folk, pub-rock and reggae tracks on Strummer 001.  The previously unissued selections make it clear that Strummer was striving to become a modern-day Woody Guthrie.  He succeeded.

Four Fists’ 6666, a collaboration between underground hip-hop luminaries P.O.S and Astronautalis, is a de facto tribute to Strummer.  Not only is the sixth selection titled “Joe Strummr,” the opening track “Nobody’s Biz” references the Clash’s “White Riot.”  The snippet of a Strummer interview that opens “Unjinxed” highlights Four Fists’ embrace of Strummer’s mandate to create protest music.

With the exception of the title track of Four Fist’s album and a version of Strummer’s garage-band classic “Keys To Your Heart,” all of 6666 is better than anything on 001.  The vitality of Four Fists’ fusion of rap, rock and electronic music honors Strummer’s legacy.  The only thing P.O.S and Astronautalis get wrong is their lament that “Joe Strummer has been dead for too damn long.”  Strummer lives in 6666.

---
My most recent concert previews for The Kansas City Star are here and here.

---
I reviewed performances by the Vijay Iyer Sextet at the Gem Theater and Ramsey Lewis and Urban Knights at the Folly Theater for Plastic Sax.

---
Angela Maria has died.  My fellow music obsessives will appreciate this documentary about the Brazilian star.

---
Ambrose Akinmusire’s Origami Harvest has replaced Kanye West as the subject of the most heated music-related altercations I'm having with my family and friends.  Not everyone shares my enthusiasm for the probable album-of-the-year.

---
Zinc City is a fever dream in which saxophonist David Binney and pianist Manuel Engel give free reign to their most psychotic impulses.  RIYL: Karl Stockhausen, nightmares, John Cage.

---
The avant-garde bluegrass of Nathan Bowles’ Plainly Mistaken occasionally sounds like a mashup of Earl Scruggs and Philip Glass.

---
Spider Bags’ scuzzy Someday Everything Will Be Fine is my kind of rock and roll album.  RIYL: Tav Falco, stage-diving into the abyss, Deer Tick.  Here’s “Oxcart Blues”.

---
Lovely or fussy?  Artful genius or pretentious twaddle?  Past his prime or a lion in winter?  I won’t argue with either set of assessments of Paul Simon’s In the Blue Light.

---
Donny McCaslin’s concert at the Folly Theater in 2017 was transcendent because the saxophonist’s trio played jazz with the energy, volume and showmanship of a rock band.  McCaslin loses the plot on Blow, a rock album that resembles a forgettable solo venture by a David Bowie sideman.  RIYL: Adrian Belew, miscalculations, Reeves Gabrels.

---
Prodded by a pal, I reluctantly listened to the Midnight’s Kids, a nostalgic love letter to mid-’80s suburban America in which synth-pop and video games were ascendent.  RIYL: Howard Jones, synth-wave, Yazoo.

(Original image by There Stands the Glass.)
Posted by Happy In Bag at 4:17 PM No comments:

I pogoed at a rapturous performance by the revolutionary rock band Half Japanese five minutes after my mind was scrambled by a collaboration between the heroic titan Anthony Braxton and the imaginative harpist Jacqueline Kerrod in Louisville on Saturday.  The startling contrast between the iconoclastic musicians is what the Cropped Out festival in Louisville is all about.

The annual event represents a paradise for broad-minded aficionados of outsider music.  I heard folk, punk, indie-rock, hip-hop, free jazz, experimental noise, bluegrass, chamber jazz, honky tonk, footwork and a comedian dressed as a opossum at the two-day event.  The music-centric festival isn’t for everyone.  Cropped Out is all about the music.  Organizers can scarcely be bothered with maintaining an online presence.  And while it boasts a glorious view of the Ohio River, the festival grounds at the American Turners Club resemble a condemned country club.

Unlike many of the approximately 750 attendees whose stylistic choices signaled an absolute rejection of the mainstream, my enthusiasm for the esoteric lineup isn’t exclusionary.  I embrace Cropped Out because it allows me to gorge on acts that I might not otherwise see without the hassles associated with major festivals.  I certainly didn’t like everything I heard.  Circuit Des Yeux, the most anticipated act at the festival, did nothing for me.  Thankfully, outings by the two veteran artists that compelled me to attend Cropped Out fulfilled my expectations.  My ten favorite performances:

Next year’s goal: crossing Harold Budd, Evan Parker and Ralph Towner off my bucket list at the Big Ears Festival.

(Original image by There Stands the Glass.)
Posted by Happy In Bag at 11:48 AM 1 comment:

John Scofield is so unassumingly exceptional that it’s only natural to take the guitarist and his rapidly expanding catalog for granted.  He tours relentlessly while issuing a steady stream of recordings.  Combo 66, the latest album in his vast discography, is (ho hum) excellent.  Joined by keyboardist Gerald Clayton, bassist Vicente Archer and drummer Bill Stewart, Scofield grooves like a Wurlitzer jukebox stocked with Grant Green and Jimi Hendrix singles.  In addition to acting as a party-starter, Scofield plays with breathtaking grace on lovely melodies including  “I’m Sleeping In.”  Yet it’s Clayton’s singular work on organ and piano that will compel me to return to Combo 66 years from now.

---
I reviewed a performance by Ryan Lee’s Mezzo String for Plastic Sax.

---
The material Otis Rush recorded for the Cobra label in the 1950s epitomizes what I want from the blues (and most other forms of music, really.)  Raw songs like “Groaning the Blues” and “Double Trouble” have terrified, thrilled and inspired me for decades.  Rush died last week.

---
The most interesting aspect of Giorgio Moroder’s appearance at the Truman last week was the way in which individual members the audience of about 600 responded to each selection.  I was there primarily for the Donna Summer hits, but most people only became fully energized when the influential producer’s contributions to movie soundtracks like “Top Gun,” “Flashdance” and “The Neverending Story” filled the room with processed cheese.

---
The lithe production of No Name’s Room 25 won’t bump in anyone’s whip.  Even so, it’s an entirely winning hip-hop album.  RIYL: Dessa, taking a break from Cardi and Nicki, Chance the Rapper.

---
I remember when Lil Wayne was the best rapper alive.  While it’s not a disaster, Tha Carter V saddens me.

(Original image of John Scofield and Bill Stewart at the Kansas City Jazz & Heritage Festival in 2017 by There Stands the Glass.)
Posted by Happy In Bag at 9:45 AM No comments: