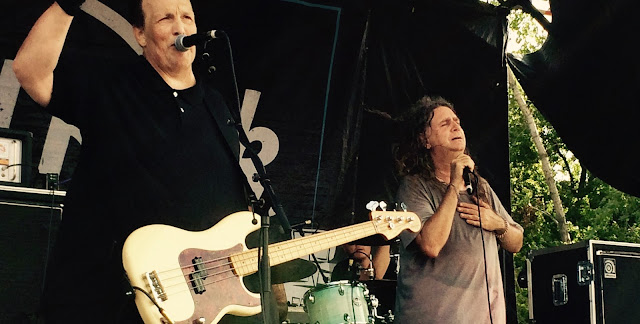 A handful of battle-scarred musicians who appeared on the Hard Rock stage at Warped Tour precluded me from being the oldest person at Providence Medical Center Amphitheater on Thursday.  I was attracted to my peers the same way pasty teens were drawn to the white rappers on the bill.

I gladly paid $50 (and an additional $10 to park) to catch the old-school punk bands Adolescents, Sick of It All and T.S.O.L.  Everything else I took in was merely sweat-soaked gravy.

The New York punk veterans Sick of It All were in fighting form.  In spite of their age, they looked like potential victors in a literal battle-of-the-bands.  The California punk oddballs Adolescents (pictured), however, didn’t look so good.  Fortunately, powerful renditions of old classics like “Word Attack” belied their down-on-their-luck countenances.

Wearing a pink suit and deep tan, Jack Grisham of T.S.O.L. expressed frustration that only a few dozen people elected to hear his band’s set.  He mocked know-nothing hoodrats who claimed to advocate anarchy by boasting that his subversive activities had inspired “an F.B.I. file before your parents were born.”

The best of the rest:

---
I reviewed Echo & the Bunnymen and Violent Femmes at Crossroads KC.

---
The Passion of Charlie Parker isn’t going to be popular in Kansas City.  I  reviewed the all-star album that doesn’t go easy on Cowtown at Plastic Sax.  David Baerwald of David & David, the project’s lyricist, left an apology in the comment section at my other music blog.

---
I previewed the Flyover fest for The Kansas City Star and Ink magazine.

---
I featured the Kansas City vocalist Millie Edwards on KCUR this week.

---
Chester Bennington of Linkin Park has died.  I last saw him perform at the VooDoo in 2014 when he was filling in for Scott Weiland as the vocalist of Stone Temple Pilots.

---
Nicole Atkins has a fine voice.  Yet the elaborate production of Goodnight Rhonda Lee requires a singer with a magnificent voice.  Atkins has a hard time breaking through the retro clutter.  (I reserve the right to be wrong- this album could be a grower.)  RIYL: Dusty Springfield, 1963, Dionne Warwick.  Here’s ”Darkness Falls So Quiet”.

---
Terrace Martin Presents the Pollyseeds: Sounds of Crenshaw, Vol. 1 sounds like a potential album-of-the-year candidate in any given moment, but it quickly becomes monotonous.  Here’s ”Intentions”.

---
I can almost smell the distinct funk of New Orleans when I listen to With You In Mind, Stanton Moore’s wondrous tribute to Allen Toussaint.  RIYL: Maceo Parker, worthy tributes, Nicholas Payton.

(Original image of Adolescents by There Stands the Glass.)
Posted by Happy In Bag at 1:52 PM No comments:


I sat down with Aaron Rhodes of Shuttlecock Music Magazine to discuss a few of my favorite things.

---
I reviewed a concert by Blondie, Garbage and the duo of Exene Cervenka and John Doe on Tuesday.

---
I discussed Jake Wells and Mike Dillon on KCUR.

---
My most recent weekly concert previews for The Kansas City Star are here and here.

---
Field Day Fest shook my confidence on Friday. Even though the event received plenty of advance publicity (including a glowing piece I wrote for Ink magazine and The Kansas City Star), the turnout was woeful. I often felt as if I was the only person in attendance who had actually paid the full $15 cover.

---
I marked a personal milestone at Plastic Sax.

---
Fresh Kid Ice of 2 Live Crew has died. I last saw him perform at the misguided Zombie Pub Crawl in 2014 in the former grocery space to the north of the Uptown Theater.

---
Every member of my compound is down with Sudan Archives’ self-titled release on Stones Throw Records. That almost never happens. RIYL: Sampha, something for everyone, Amber Coffman.

---
Based on the melodic pop sensibility of Tenere, I sense that Afous D’Afous is fully capable of taking the place of 311 on the American summer festival circuit. RIYL: Bombino, dancing, Tinariwen. (Tip via Big Steve.)

(Original image by There Stands the Glass.)
Posted by Happy In Bag at 2:48 PM 1 comment: 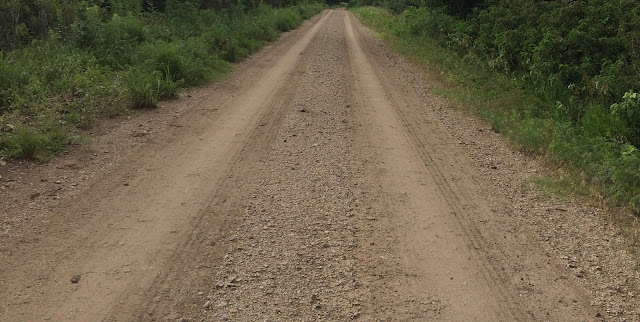 There’s a right way and a wrong way to make an album of cover songs.  Nikka Costa takes the proper approach on the stellar Nikka & Strings: Underneath and In Between.  The unconventional arrangements and unusual instrumentation demonstrate Costa’s healthy irreverence on selections like Prince’s ”Nothing Compares 2 U”.  Her leisurely version of  “Stormy Weather” makes a case for Costa as Etta James’ most worthy heir.  Conversely, Douyé’s impeccably tasteful interpretations of standards like “In a Sentimental Mood” on Daddy Said So are infuriatingly stale.  The inability of elite jazz musicians like Kenny Barron, Ron Carter and Jeremy Pelt to lift the project out of the doldrums makes the effort even more frustrating.  The reactionary conservatism of Daddy Said So sounds like the supper club of my nightmares.


---
I reviewed a concert by Iron Maiden and Ghost on Tuesday.

---
I reviewed Monday’s outing by DJ Shadow at the Madrid Theatre.

---
OneRepublic’s concert at the Sprint Center on Friday was one of my favorite shows of 2017.  No joke.  I reviewed the concert for The Kansas City Star.

---
21 Savage’s Issa is so bad that it's good. "FaceTime" is among the tracks that are both brilliantly awful and awfully brilliant.

---
I love everything about Riverside’s The New National Anthem.  The project overseen by trumpeter Dave Douglas is RIYL Carla Bley, brilliant fun, Old and New Dreams.

(Original image by There Stands the Glass.)
Posted by Happy In Bag at 12:21 PM No comments: 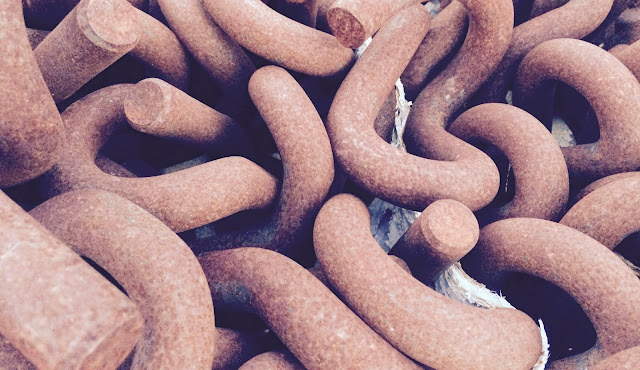 As millions of Jay-Z fans parsed 4:44 over the weekend, heedful Kansas Citians studied Rich the Factor’s latest missive.  1,000 (Keep It Ten Hunnid) is another essential document of Kansas City’s criminal underworld.  The album validates the assertions I made in an extensive examination of Rich published by KCUR last year.  The title track includes a statement of purpose: “Rich, why you rap about the drug life? I’m like Pac when he rapped about thug life.”  He notes that “I handle business on the late night and keep my grass cut low for the snake bites” on “Late Night.”  The production continues to reference ‘80s and ‘90s R&B.  “On the Grit” samples the 1990 hit After 7 “Ready or Not,” a sentiment that reflects Rich’s unrepentant grind.

---
I accorded the Philistines my KCUR Band of the Week designation.

---
I consider reactions to the American Jazz Museum’s negative publicity at Plastic Sax.

---
Pianist Geri Allen has died.  Perfection, her collaboration with David Murray and Terri Lyne Carrington, was my #9 album of 2016.

---
A perplexing eight-minute documentary on the creation of Bargou ‘08’s wonderful Targ in Algeria raises more questions than it answers.

(Original image by There Stands the Glass.)
Posted by Happy In Bag at 9:41 AM 1 comment: