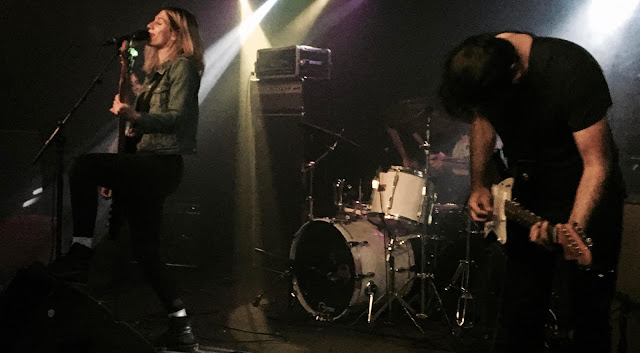 I was in bad shape when I stepped inside the Riot Room on the afternoon of Sunday, November 24.  A spate of terrible news had taken a toll on me.  Drawn to the nebulous blare coming from the stage, I pushed through a cluster of about 50 people at the free show to claim a spot in front of a bank of speakers.  Doubledrag, a Kansas City band I hadn’t previously encountered, was toying with the violent feedback drones associated with the Jesus and Mary Chain.  The extreme volume made it impossible to tell if Doubledrag was attempting to play actual songs.  I didn’t care.  Completely surrendering to the caustic sound was profoundly therapeutic.  Subsequent sets by the Austin shoegaze bands Blushing and Ringo Deathstarr didn’t do much for me.  I wasn’t bothered by the absence of funk, soul and swing in Doubledrag’s violent barrage, but the touring bands’ disregard of grooves grew wearisome.

(Original image of Blushing by There Stands the Glass.)
Posted by Happy In Bag at 8:39 AM No comments:

I muddled through 2019 by taking the long view.  Rather than getting bogged down in minute-by-minute minutiae, I try to focus on the big picture.  The deepening of my longstanding affinity for Chicago’s fertile improvised music scene reflects my outlook.  The elements I admire about the AACM community are amplified on Junius Paul’s debut album Ism.  In addition to exuding a profound sense of spirituality, the bassist’s free jazz demonstrates a willingness to transcend swing and an eagerness to incorporate electronic elements.  The disorienting cut-and-paste techniques associated with co-producer Makaya McCraven as well as Paul’s affiliation with the Art Ensemble of Chicago are clearly evident.  Although I could do without a couple of the extended jams on the 82-minute Ism, the album is emblematic of the aesthetic I’ve embraced during the last 11 months.  Given that traveling to Knoxville and Chicago to catch performances by the reconstructed version of the Art Ensemble of Chicago was an integral component of my quest, the ancient-to-the-future motto espoused by Paul serves as my rallying cry of 2019.


---
I break down the Thanksgiving blues breakfast dance options in the latest edition of the weekly KCUR Creative Adventure email.

---
I’m cited in a The Kansas City Star article about Grammy-nominated musicians with area ties.

(Original image of the AACM Great Black Music Ensemble at Fred Anderson Park in Chicago by There Stands the Glass.)
Posted by Happy In Bag at 1:42 PM No comments:

Almost everything about Brandee Younger’s new album Soul Awakening is confounding.  The jazz harpist’s project was recorded in 2012 but was self-released released five months ago.  In spite of contributions from the jazz heavyweights Ravi Coltrane and Sean Jones, Soul Awakening has received so little visibility that I only became aware of it last week.  And in spite of being as accessible and groovy as the work of crossover artists like Kamasi Washington and Sons of Kemet, it’s gained little traction on streaming services.  A stellar video of a recent concert makes it clear that Younger is a proud acolyte of the spiritual jazz icons Dorothy Ashby and Alice Coltrane.  I don’t ordinarily fall for throwback recordings, but the potent Soul Awakening stirs me.

---
I reviewed Lana Del Rey’s concert at the Uptown Theater for The Kansas City Star.

---
I write concert previews for The Kansas City Star every week.

---
I consider The State of This City, the new album by the Myers Swingset, at Plastic Sax.

(Original image by There Stands the Glass.)
Posted by Happy In Bag at 9:46 AM No comments:

A New Age for New Age

A conversation I overheard during the intermission of Max Richter’s concert in Austin last month provided insights into the revival of dreamy new age music.  Describing the unobtrusive background music he listened to at work, a painfully fashionable twenty-something said “just give me a cello and a tinkling piano and I’m good.”

That guy probably accounts for some of the more than three million Spotify streams of “Staircase Sonata”.  The tranquil ditty is a standout track on Absent Minded, the debut album of the young Icelandic pianist Gabríel Ólafs.  It’s among the dozens of recent releases that fall somewhere between the effervescent work of George Winston and Brian Eno’s innovative sonic wallpaper.

Is Absent Minded shallow new age noodling or weighty ambient music?  I’m not sure it matters.  As someone who worked at a record store during the height of the Windham Hill era in the 1980s, I never derided the middle-aged people who were desperately eager to purchase therapeutic sounds.  I rightly suspected that I’d eventually come to understand their need for aural consolation.


---
I write weekly concert recommendations for The Kansas City Star.

---
I reviewed Matt Villinger’s All Day at Plastic Sax.

(Original image of Iceland by the spouse of There Stands the Glass.)
Posted by Happy In Bag at 3:10 PM No comments:

Something Sinister To It 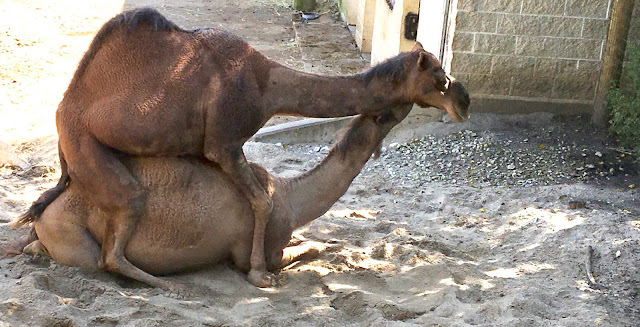 I recently stumbled upon Rap For Grown Ups.  The site claims to offer “notes from the intelligent side of hip-hop.”  Rather than providing thoughtful analysis, it mostly supplies notifications about new releases.  Even so, it’s a helpful reference for old heads eager to discover relevant music that doesn’t get the shine of the latest work of ostensibly “unintelligent” hip-hop stars.

While I abhor cretins like Lil Mosey, I’ve never hid my affection for intentionally lowbrow stars like Cardi B, Doja Cat and DJ Khaled.  That’s another way of suggesting that I object to killjoys who summarily dismiss the best party music of the last decade.  Three recent releases falling more-or-less under the nebulous banner of “intelligent hip-hop” captured my attention.

Although he’s just 25, Thebe Kgositsile, the world-weary rapper who makes dyspeptic music as Earl Sweatshirt, already sounds like an old man.  Feet of Clay is 15 minutes of murky avant-garde experimentation.  Nothing he creates is likely to hit me as hard as Doris did in 2013, but I’ll always be more than willing to give Kgositsile the benefit of the doubt.

The Kansas City collective Drop Dead XX creates a simulacrum of Earl Sweatshirt on Dirtbike.  They’re also in thrall of Brockhampton, EarthGang and Tyler, the Creator.   Dirtbike is solid, but I hope the members of Drop Dead XX are able to move beyond their influences on future projects.


---
I define terms at Plastic Sax in advance of my appearance on the Ask a Jazz Dude show.

---
I make weekly concert recommendations for The Kansas City Star.

---
The Chicago Reader gave me a photo credit for an image that accompanies a story about Bill MacKay.  I took the shot of MacKay and Nathan Bowles at the 2018 edition of the Cropped Out festival in Louisville.

(Original image by There Stands the Glass.)
Posted by Happy In Bag at 9:16 AM No comments: 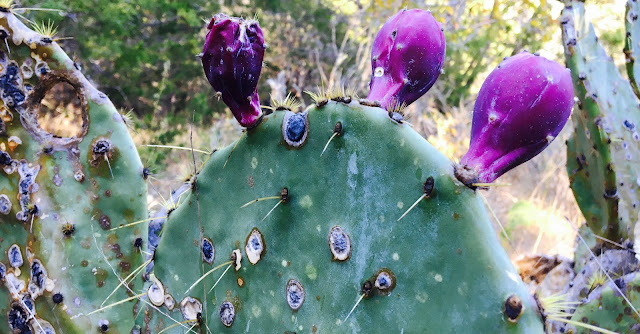 Did you record your solo banjo album in a bathroom?  I want to hear it.  Your new Chicago footwork track was made entirely on your phone?  Send it over.

Decades of listening to do-it-yourself punk bands and murky bootlegs surreptitiously recorded by jazz fanatics conditioned me to low fidelity.  I didn’t flinch at the ostensibly revolutionary sonic mayhem created by the latest wave of devil-may-care Soundcloud rappers.  Unintentional distortion, background hiss and the clatter of silverware can’t phase me.  That’s why I’m occasionally stunned by gilt-edged studio trickery.

The sound of Miranda Lambert’s new album Wildcard floors me.  In addition to being a rollicking cosmic country album, the exquisite fidelity of Wildcard makes it moonlight as a psychedelic adventure.  Each component of the mix bounces around the sound field like a frenetic bouncing ball.  Jay Joyce, the Nashville producer closely linked to Eric Church’s success, is responsible for the album’s sonic thrills.

I’d love Wildcard even if the production didn’t tickle my eardrums and reshuffle my synapses.  That it sounds like a shimmering version of Exile on Main Street makes it that much sweeter.


---
I reviewed Celine Dion’s concert at the Sprint Center for The Kansas City Star.

(Original image by There Stands the Glass.)
Posted by Happy In Bag at 10:41 AM 1 comment: