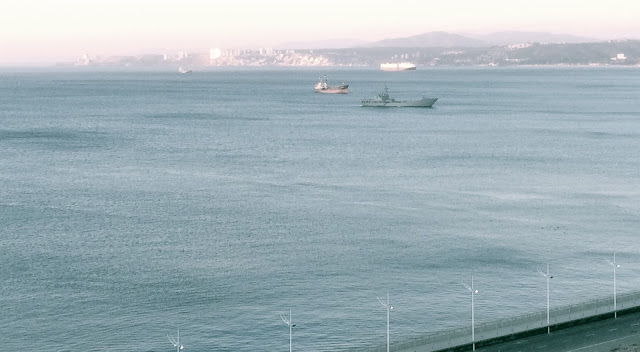 I’m not sure why so many otherwise reasonable people are praising Frank Ocean’s Blonde.  Aside from three or four decent tracks, it’s a calamitous effort.  As you can see in the column to the right, I loved Ocean’s 2012 album Channel Orange.  Yet I’m disappointed rather than despondent.  With good-to-great new neo-soul/hip-hop albums by BJ the Chicago Kid, Chance the Rapper, Kendrick Lamar, Maxwell, Anderson Paak, Rihanna, Kanye West and Adrian Younge to keep me company, I’m not compelled to pretend that Blonde is good.


---
I reviewed a concert by Def Leppard, REO Speedwagon and Tesla.

---
Tomorrow's Dixie Chicks concert at the Sprint Center is my big show of the week.

---
Juan Gabriel has died.  His concert at the Sprint Center last November was a delight.  I snapped a good photo at the show.

(Original image by There Stands the Glass.)
Posted by Happy In Bag at 2:17 PM No comments: 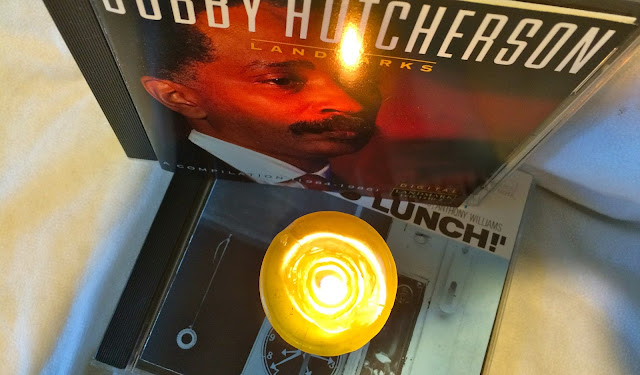 As the first album I heard that made me realize that jazz could be just as confrontational as rock or R&B, Out To Lunch changed my life.  Bobby Hutcherson’s entry at the five-second mark of the opening track ”Hat and Beard” on Eric Dolphy’s famous 1964 album is one of my favorite moments in jazz.  Following the news of Hutcherson’s death last week, I investigated a few albums I’d never heard.  ”Rain Every Thursday” from the vibist’s misunderstood 1972 funk album Natural Illusions is my new favorite jam.


---
While I hadn’t looked forward to covering the show, I adored Josh Groban’s appearance at Starlight Theater last week.  Here’s my review.

---
Friends don’t believe me when I tell them that being in the midst of thousands of giddy teens energizes me.  I relished Saturday’s concert by 5 Seconds of Summer, Hey Violet and Roy English.  Here’s my review.  I documented 15 representative seconds of screaming at Instagram.

---
I discussed Madisen Ward and the Mama Bear on KCUR last week.

---
I wrote an extended preview Beach House’s concert at the Uptown Theater.

---
I reviewed a release by the Brandon Draper Quintet at Plastic Sax.

---
Toots Thielemans has died.  The Brasil Project was one of my favorite albums of 1992.

---
Various Blonde created a video for ”All Bases Covered”.

---
I, for one, welcome our new robot overlords.  Steve Aoki’s remix of Soundgarden’s “Spoonman” pleases me.

---
Dolly Parton gets freaky on the delightfully odd Pure and Simple.  Here’s “Can’t Be That Wrong”.

---
I have yet to listen to Frank Ocean's long-awaited new release.

(Original image by There Stands the Glass.)
Posted by Happy In Bag at 12:29 PM No comments: 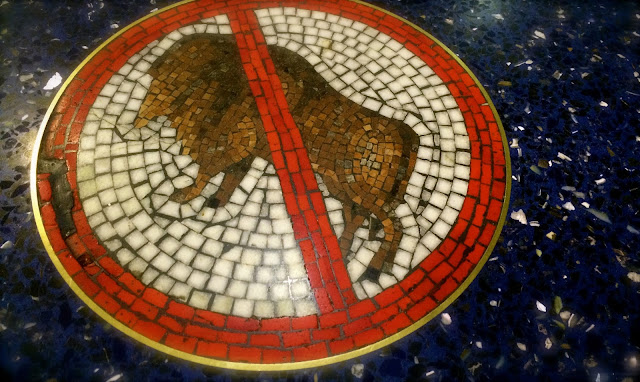 In the past week I’ve attended performances by banda, honky tonk, mainstream jazz and folk artists.  I also wrote a short essay about an indie-rock group and talked about a heartland rock band on an NPR affiliate.  While it’s all of a piece to me, I’ve regularly employed Cut, a new album by Chicago’s Stirrup, as a proverbial palate cleanser.  Cellist Fred Lonberg-Holm makes a Sonny Sharrock-esque racket in the unconventional power trio.  It's the sort of room-clearing noise that's long appealed to me.  Here’s correspondingly unpopular live footage.


---
I reviewed a concert by Julión Álvarez y Su Norteño Banda and Poncho Barraza at the Sprint Center.

---
I wrote an extended preview of Gwen Stefani’s concert at the Sprint Center.

---
I pondered the carreer of the Rainmakers with Steve Kraske on KCUR last week.

---
I wimped out at Plastic Sax by not identifying the perpetrators of a dismal jazz performance.

---
The folk star Glenn Yarbrough has died.  Fun fact: he and Jac Holzman, the founder of Elektra and Nonesuch Records, were college roommates.

(Original image of KCI floor tile art by There Stands the Glass.)
Posted by Happy In Bag at 6:31 PM 1 comment: 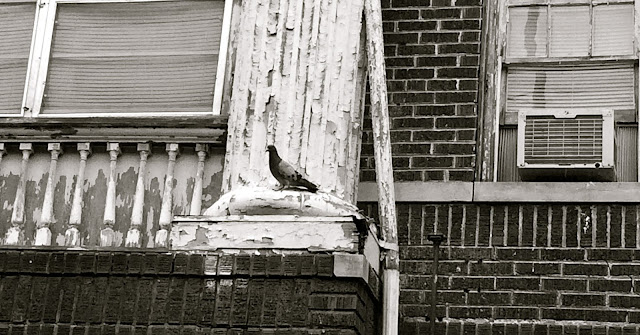 I was transported back to my suburban youth as Jeff Beck played the 1975 jazz fusion classics “Freeway Jam” and “Cause We’ve Ended As Lovers” at Starlight Theatre last week.

On the cusp of the punk revolution, the garage bands in my subdivision near Kansas City International Airport were still in thrall of jazz fusion and progressive rock.  Selections from Beck’s Blow by Blow, Kansas’ Masque and Rush’s Fly By Night were studiously covered by the musically-inclined big brothers of my hoodrat friends.

In other words, I come by my abiding affection for unfashionable jams like “School Days” and ”You Know, You Know” honestly.


---
I reviewed a concert by Buddy Guy and Jeff Beck.

---
I talked about Steddy P on KCUR last week.

---
I previewed Corinne Bailey Rae’s concert at the Uptown Theater for The Kansas City Star and Ink magazine.

---
I paid $35.50 to hear David Sanborn perform at Muriel Kauffman Theatre last week.  My thoughts on the show are posted at Plastic Sax.

---
Charlie Hunter’s Everybody Has a Plan Until They Get Punched In the Mouth is insanely fun.   RIYL: Lester Bowie, parties, Medeski Martin & Wood.

---
Sarah Borges’ “Tendency to Riot” is one of my favorite songs of 2016.  Her Good and Dirty EP was produced by Eric Ambel.  RIYL: The Bottle Rockets, alcohol, Tim Easton.

---
The 1970s redux!  Nels Cline’s Lovers is a wondrous evocation of the adventurous side of CTI Records.  Admirers of third stream albums by Jim Hall and Paul Desmond are likely to adore Lovers.

(Original image by There Stands the Glass.)
Posted by Happy In Bag at 11:33 AM No comments: 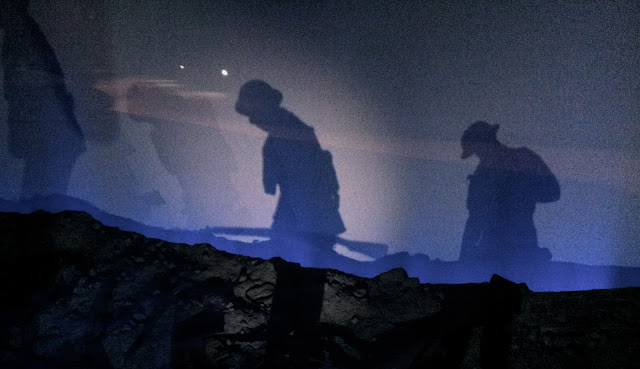 I passed on Warped Tour last week.  The reduced number of stages and a disappointing lack of variety meant that the chances making a new discovery weren’t very good.  And the idea of paying $45 to stand on black asphalt in extreme heat to hear Good Charlotte just didn’t appeal to me.

I wouldn’t have hesitated to pony up had the Descendents been on the bill.  The group has been talkin’ ‘bout my generation for decades.

The new album Hypercaffium Spazzinate contains 21 brief songs that address the concerns of guys my age.  “No Fat Burgers” is my new theme song and the discontent of “Business A. U.” is all too relatable.  Here’s ”Victim of Me”.


---
I reviewed a concert by Miike Snow and Jack Garratt.

---
I reviewed a concert by the Indigo Girls.

---
I wrote an extended preview for Umphrey’s McGhee’s upcoming concert.

---
I graded every concert in the forthcoming seasons of the American Jazz Museum’s Jazz at the Gem and the Folly Theater’s jazz series at Plastic Sax.  Spoiler alert: Jack DeJohnette!

---
Until Friday, the most expensive concert tickets I’d purchased were for a Kraftwerk show in Toronto.  I splurged on a pair of 11th row tickets for Dolly Parton’s concert at the Sprint Center last week.  The entirely delightful show was worth the breathtaking expense.

---
The Conquerors created an entertaining video for “Wyld Time.”

---
Elliot Galvin makes jazz seem boring.  The wild experimentation he and his band display on Punch indicates that most mainstream jazz is hopelessly prosaic.

---
Date night fail #541: Unaware of the intent of the new solo album by the Lady Antebellum vocalist, I cued up Hillary Scott & the Scott Family’s Love Remains for the drive to Dolly Parton’s concert on Friday.  I expected to hear slick love ballads.  Instead, my date and I got an earful of songs about Jesus.

(Original image by There Stands the Glass.)
Posted by Happy In Bag at 12:33 PM 1 comment: