Talkin’ Out the Side of My Neck 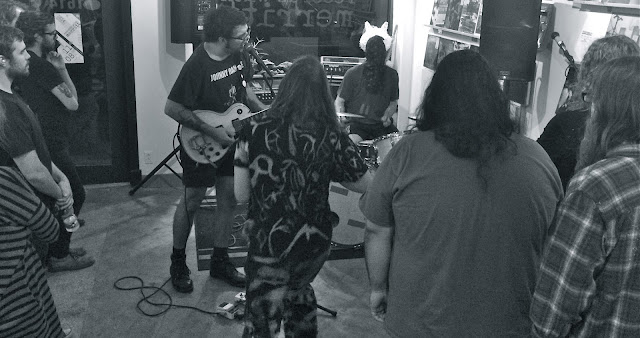 I was denied entrance to the Power & Light District last night.

The inner sanctum of the entertainment area had reached its capacity of 3,500 for a free concert by Cameo.  I stood among more than 1,000 disappointed people who were also shut out.  After listening to the brilliant band for about twenty minutes as I verified that all external doors were locked and that every security guard took his job seriously, I dropped into the RecordBar.

Johnny Hamil led a “gawdy cartoonnoirjazz” (his words and stylization) band for a handful of fans, friends and family members.  After marveling at the blood moon from the venue’s smoking patio, I moved a few blocks west on Westport Road.

An adorably sincere little punk show at Records With Merritt provided me with the thrill I’d been seeking.  Rather than feeling self-conscious about being the oldest member of the audience by at least twenty years, I took pleasure in knowing that I was the only listener who had attended performances by Sonic Youth and Cameo thirty years ago.

---
I previewed Vince Staples’ concert at the Granada for Ink magazine.

---
I reviewed Many a New Day: Karrin Allyson Sings Rodgers and Hammerstein at Plastic Sax.

---
I’ve long adored K.T. Oslin.  Even so, I can’t tell if Simply, a brief album of remakes, is a last gasp or a welcome comeback.

(Original image by There Stands the Glass.)
Posted by Happy In Bag at 12:02 PM No comments: 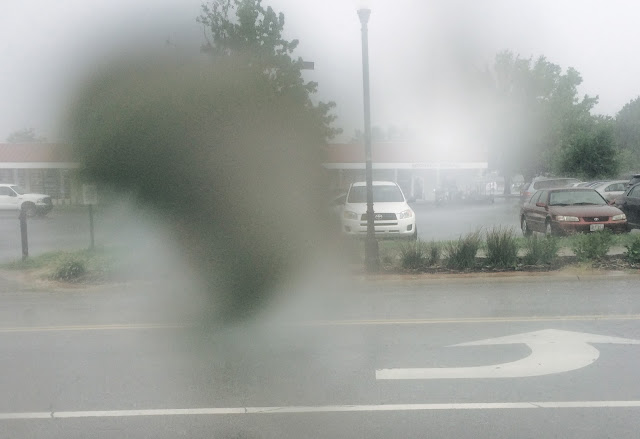 I’m no longer crestfallen that Christian Scott isn’t performing in Kansas City on his current tour.  I expected his new release to expand on the exciting advances he made on Christian aTunde Adjuah, my #2 album of 2012.  Instead, it’s a tedious retrenchment.

Stretch Music is billed as "a genre-blind musical form that stretches the rhythmic, melodic and harmonic conventions of jazz to encompass as many musical forms, languages, thought processes and cultures as possible."

The project reeks of unflattering me-too-ism.  Scott seems to be trying to unnecessarily prove that hip-hop, rock and jazz can coexist.  He’s merely rehashing the work of Flying Lotus, Nicholas Payton, Miles Davis and Gil Evans.

I expect Scott to be a leader.  He’s opted to be a follower.  Unless Frank Ocean or Kanye West stumbles, Stretch Music will be the most disappointing album of 2015.

---
Here are the weekly music previews I write for The Kansas City Star.

---
I contributed a Local Listen segment about Making Movies to KCUR.

---
Bobby Watson and his touring band thrilled me at the Folly Theater on Friday.  Here’s my review.

---
A man seated near me softly snored through much of the Kansas City Symphony’s concert on Sunday afternoon.  The tiresome program didn’t excite me either.  I’m more of a Berg: Lyric Suite; Wellesz: Sonnets By Elizabeth Barrett-Browning guy.  Here’s the intriguing EPK for the new collaboration between the Emerson String Quartet and Renée Fleming.

---
I assume that Shannon and the Clams and the critics who extol the band are trolling.  Gone By the Dawn is dismal.  RIYL: The Shaggs, the first rehearsal of an unpromising garage-rock band, Jonathan Richman at his most insufferable.

---
The subtleties of The Evolution of Oneself initially eluded me.  Repeated listens have revealed that the trio of Orrin Evans, Christian McBride and Karriem Riggins have created one of the year’s best jazz albums.  Recommended to people who appreciate both Ray Brown and the Wu-Tang Clan.

---
Mary Halvorson’s Meltframe does nothing for me.  RIYL: Robert Fripp, dissertations about music theory, Bill Frisell.

---
I don’t have anything bad to say about Keith Richards’ Crosseyed Heart.  RIYL: Ian McLagan, lions in the winter, Chuck Berry.

---
Steve Van Zandt’s maximalist production of Introducing Darlene Love is too much for me.  Here’s the overblown ”Forbidden Nights”.

(Original image by There Stands the Glass.)
Posted by Happy In Bag at 10:08 AM No comments: 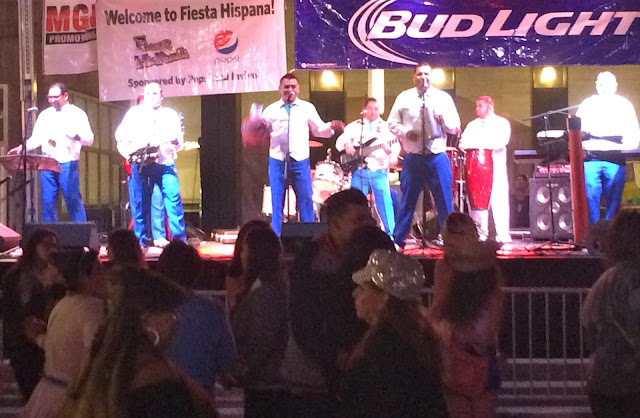 I’m beginning to suspect that I’m on the wrong continent.  The joy I felt on a recent trip to Chile and at a concert by a cumbia band on Friday has me rethinking my place on the planet.

My Spanish may be atrocious, but most everything else feels right about a potential move to the south.

I didn’t understand what a member of the dynamic show band Tropicalísimo Apache said when he pointed me out during Friday’s free concert at Barney Allis Plaza.  If he was encouraging a brave woman to dance with me, his request went unheeded.

No matter.  I was so enthralled with the expertise with which the Mexican band played the music of Columbia that I’m ”Una Copita de Ron” away from buying a one-way ticket to Bogotá or Santiago.


---
Here are my most recent weekly music picks for The Kansas City Star and Ink.

---
I previewed the Crossroads Music Fest for Ink and contributed to a review of the event for The Kansas City Star.

---
An item about Second Hand King is among my recent contributions to KCUR.

---
I caught a portion of the Prairie Village Jazz Festival at Plastic Sax.  Here are my notes.

---
I’m unable to resist the Go! Team’s charms.  Listening to The Scene Between gives me the same feeling I had when I was seven years old and watching a new episode of my favorite Saturday morning cartoon.  RIYL: the Magnetic Fields, Sid and Marty Krofft, the Crystals.  Here’s the title track.

---
I didn’t catch last year’s Chick Corea/Bela Fleck tour.  The concert document Two indicates that you had to be there.

---
Anne-Sophie Mutter gets it.  The Club Album is everything it’s meant to be.  RIYL: populism (of a sort), Vivaldi, marketing genius.

(Original image by There Stands the Glass.)
Posted by Happy In Bag at 11:43 AM No comments: 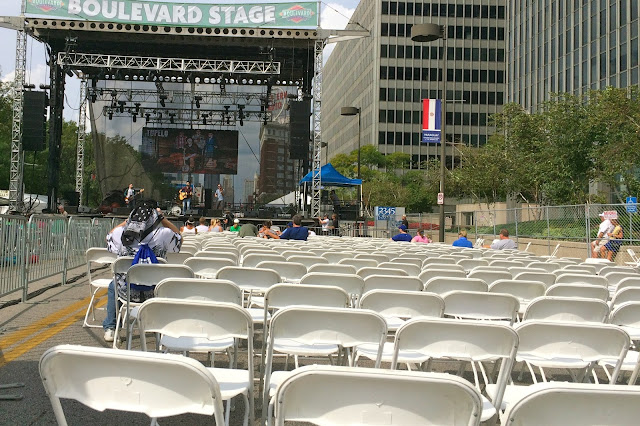 I planned on spending all day at the KC Irish Fest when I forked over $18 to gain admission to the popular event on Saturday.  Succumbing to crankiness rooted in heat and sobriety, I left after just a few hours.

A solo set by Larry Kirwan of Black 47 was the highlight of my experience.  His strident political songs were balanced by old favorites like “40 Shades of Blue” and the minor 1991 hit "Funky Céilí (Bridie's Song)".

Only one of the five additional performances I witnessed is worth mentioning.   Kiana Weber, the fiddler of Gaelic Storm, led a session titled Transatlantic Unplugged with Kiana.  The largely acoustic jam included guests from the festival’s top acts such as Socks in the Frying Pan, We Banjos 3, the Elders and Flashpoint.

The lively collaborations provided a nice survey of everything I wasn’t willing to stick around to hear.

---
I previewed Lee “Scratch” Perry’s show at the Riot Room for Ink.

---
Ruby Amanfu’s Standing Still is the best Chris Isaak album I’ve heard in years.  I’m down with anyone who covers both Bob Dylan and Kanye West.  Her interpretation of the Wilco/Bragg/Guthrie gem “One By One” is magnificent.  Here’s a nice interview/performance video.

---
I purchased a batch of Bryan Ferry solo albums as cutouts in the early ‘80s.  The posh atmosphere of those elegant recordings was foreign to me.  I still can’t relate more than 30 years later.  Although Dan Bejar doesn’t have much of a voice, Destroyer’s Poison Season reminds me of those Ferry albums.  RIYL: Belle and Sebastian, ennui, Gerry Rafferty.

---
Much of Ghost B.C.’s Meloria sounds more like the Moody Blues than Black Sabbath.  Not my thing.

---
I have only one thing to say about Motörhead’s Bad Magic album.

---
George Clinton and affiliates like Bootsy Collins sounded cool when they rambled about the cosmic virtues of funk in the 1970s.  When Dâm-Funk and his cohorts do the same on his new album Invite the Light, they comes across as dorks.  Invite the Light is really good when no one’s talking or singing. RIYL: 1975, Junie Morrison, funkateers.

(Original image of the Dublin band Tupelo at the KC Irish Fest by There Stands the Glass.)
Posted by Happy In Bag at 9:37 AM No comments: