Concert Review: 1349 at the Riot Room 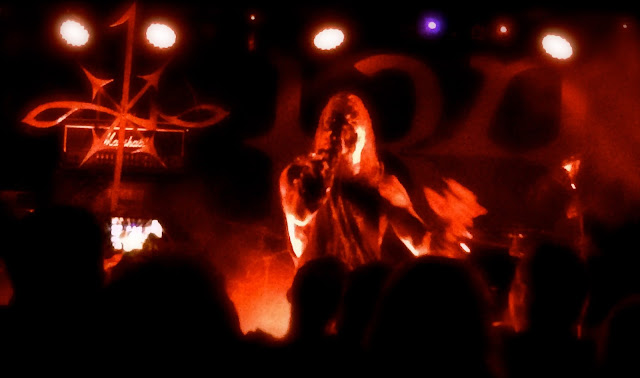 The malevolent sound of 1349 wasn’t the scariest thing at the Riot Room last Thursday.  Repugnant odors were far more horrifying than the music of the Norwegian black metal band.  Combined with the acidic smell of dry ice, the stench of dank hair that filled the air as hirsute members of the audience began headbanging to 1349’s opening selection “I Am Abomination” caused me to involuntarily retch.  The rancid funk couldn’t prevent me from grinning at the band’s face paint and the ostensibly evil hand gestures made by some of 100 or so fans and thrill-seekers who paid $15 to see the show.  It looked and sounded a lot like this.  Jackson May wrote a more respectful account of the show for Mills Record Company.

---
Strange but true: a band named Agoraphobic Nosebleed created my favorite song of January. "Not a Daughter" floors me.

---
On paper, Tortoise should be one of my favorite bands.  I admire the theoretical impulse behind the music.  The reality is quite different.  Like most other Tortoise projects, The Catastrophist does little for me.  RIYL: the lack of swing, Stereolab, soullessness.

---
Dave Mustaine sounds like he’s running for office on Megadeth’s Dystopia.  He doesn’t have my vote.  Here’s the title track.

---
I suppose I’m obligated to have a take on Macklemore & Ryan Lewis’ “White Privilege II”:  I prefer to atone in private.  Tying oneself up into knots in public is bound to backfire.

---
Paul Westerberg and Juliana Hatfield are charming as the I Don’t Cares on the modest Wild Stab.  RIYL: The dB’s, demos, Alex Chilton.

---
If Yes had been a black metal band, it would have sounded like Borknager.  Winter Thrice is RIYL: Game of Thrones, pomp, Coheed and Cambria.  The title track is glorious.

(Original image by There Stands the Glass.)
Posted by Happy In Bag at 3:59 PM No comments: 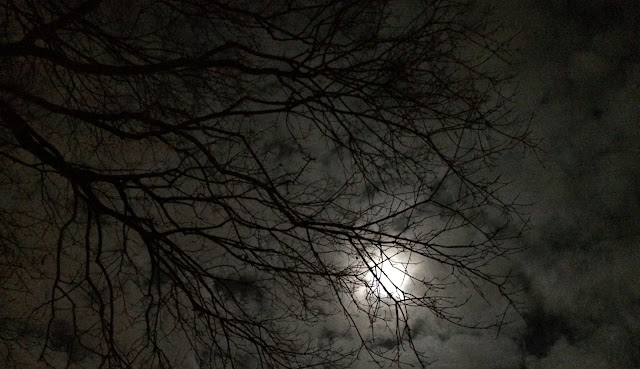 The cover art is ridiculous, the guitar solos are garish, the vocals are generic and the production is flat.  I adore Exmortus’ Ride Forth anyway.  The band's standard-issue metallic riffing scratches one of my recurring itches.  ”For the Horde” is exactly what I need to get me through this dark month.


---
I reviewed G-Eazy's sold-out concert at the Midland theater.

---
I featured Jay McShann in an episode of KCUR’s weekly Local Listen and reviewed a centennial birthday concert in his honor.

---
I can’t keep up with the spate of notable deaths.  The careers of Phil Everly, Paul Bley, Long John Hunter, Pierre Boulez, Clarence “Blowfly” Reid, Red Simpson and Glenn Frey may or may not be examined in this space in the weeks to come.

---
As the first genuine soul man to drip sweat on me while I was on a dance floor, Otis Clay had a more profound impact on me than any of the men listed in the item above.  I first saw him pour it all out at a blues club in Chicago in the 1980s.  I also recall the late George Myers, a co-owner of the Grand Emporium, playfully delivering a nickel and a nail to the stage of his bar during a Clay performance.  Clay died on January 8.  Here’s footage from Soul Train.

---
I asked McClain Johnson an “uncomfortable question” after I heard 3,000 white kids yell a racial epithet during A$AP Ferg’s performance at the Midland.  Here’s his response.

---
Blackstar is solid.  Had David Bowie released the album a month earlier, Blackstar would have ranked #15 on my Best Albums of 2015 list.

---
Charles Bradley’s cover of Black Sabbath’s ”Changes” is a revelation.

---
I’ll gladly buy a ticket to see Hinds perform, but I’ve already heard all the sounds on Leave Me Alone too many times.  RIYL: The Blake Babies, enthusiasm, Burger Records.

---
I may grow to love the album, but my initial reaction to Anderson Paak’s Malibu is that it’s precisely one-third as good as To Pimp a Butterfly.  Here’s ”Come Down”.

---
Why didn’t any of you jerks tell me about Judith Hill’s Prince-produced 2015 album Back In Time?  I would have missed the fine R&B project entirely had the bots at Spotify not insisted that I hear it.  Here’s ”Cry Cry Cry”. RIYL: Etta James, Prince media blackout, Alicia Keys.

(Original image by There Stands the Glass.)
Posted by Happy In Bag at 3:57 PM 4 comments: 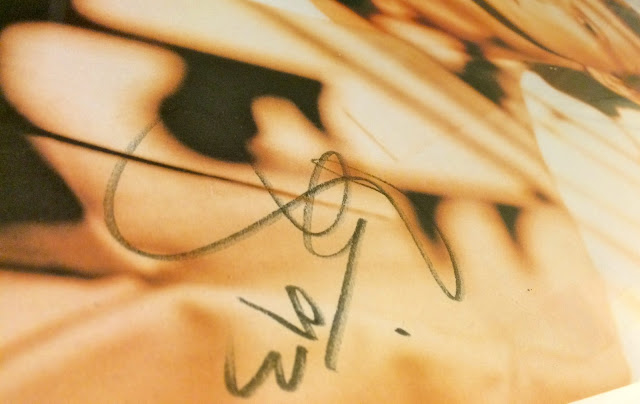 David Bowie died yesterday.  Here’s an incomplete timeline of his impact on my life:

1978-80: As a misfit kid in the pre-internet era, determining who and what I was became easier once I discovered David Bowie.  I studied his back catalog as if it was a musical hidden treasure map.  The aggressive glam-rock of The Rise and Fall of Ziggy Stardust and the Spiders From Mars blew my mind.  The application of jazz on Aladdin Sane made a profound impression on me.  Low remains my favorite Bowie album.

1980-81: Two or three of my high school friends insisted that Scary Monsters (And Super Creeps) be utilized as the soundtrack for several hazy high school experiences.  (Maybe that’s why I never acquired a taste for the album.)

1982: I talked my way into a Stevie Ray Vaughan rehearsal for Bowie’s Let’s Dance project at Billy Bob’s Texas.

1983-84 Bowie’s Let’s Dance became a mainstream pop sensation.  I was thrilled when “normal” girls would dance with me as Bowie songs played.

1990-93: I was a sales rep for Rykodisc as the record label rolled out reissues of Bowie’s catalog.  I was awarded the autographed poster pictured above at a sales conference.

2015: I was pleased but not surprised upon learning that Bowie was collaborating with the jazz musician Donny McCaslin for what would become his final album.

(Original image by There Stands the Glass.)
Posted by Happy In Bag at 9:17 AM No comments: 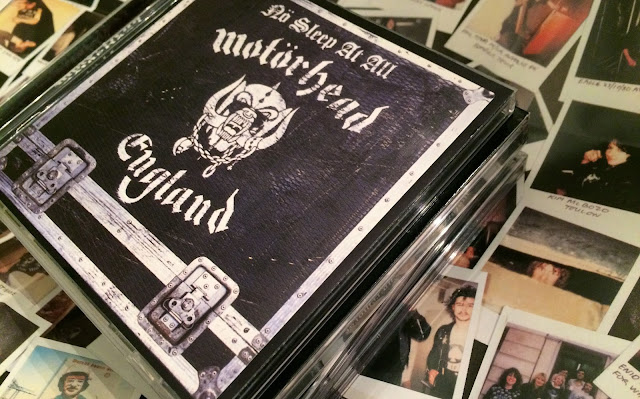 Motörhead knew only one song.  Thankfully, it was a great one.  The running time of my collection of physical copies of Motörhead albums and CDs is more than six hours.  Talk about overkill...

I never had any use for Hawkwind, but Lemmy Kilmister’s Motörhead meant a lot to me.  I came upon the Ramones and Motörhead at about the same time.  Like a lot of self-conscious teenagers, I had been under the foolish impression that image had meaning.  Lemmy and his partners in crime helped me to understand that the barriers between punk and metal were artificial constructs.

My bones were rattled at several Motörhead performances.  The group’s 2006 concert at the minor league baseball stadium in Kansas City, Kansas, is ranked #19 on my 2009 list of The Best Shows of the Decade.

---
Natalie Cole has died.  Her live version of ”Something Got a Hold On Me” is my favorite Cole performance.

---
Craig Strickland has died.  The member of Backroad Anthem last performed in the Kansas City area at Kanza Hall on Jan. 15, 2015.

---
Nicole Mitchell’s Artifacts is the first entry on what’s sure to be a long list of unintentional omissions from my Top 50 Albums of 2015 post.   Check out the skronky combination of flute, fiddle, bass and drums on ”The Clowns”.

---
The soundtrack for The Revenant is RIYL: Tangerine Dream, isolation, Nico Muhly.

---
Posted without commentary: footage of Osa Johnson, the native Kansan who traveled the world with her husband Martin, dancing to jazz with African pygmies.

(Original image by There Stands the Glass.)
Posted by Happy In Bag at 3:41 PM 2 comments: