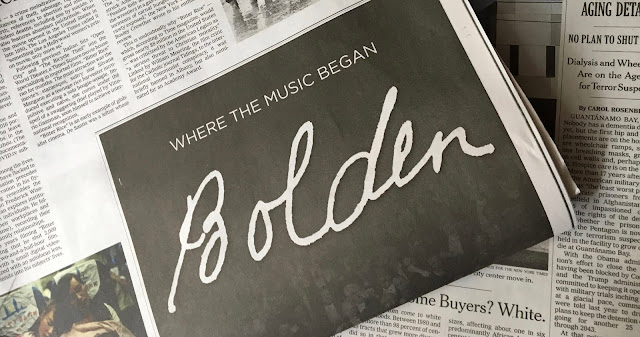 The New Yorker published a cartoon in 1992 that depicts excited children shouting “Dad! Dad! Wake up! They just discovered another Marsalis!” as they invade the bedroom of a sleeping man.  The gag remains relevant 27 years later.  I recently learned that Wynton Marsalis’ son Jasper creates musique concrète as Slauson Malone.  The fascinating A Quiet Farwll, 2016-2018 alludes to the jazz, classical and funk associated with his famous family but is more closely aligned with rap-adjacent sonic experiments like Earl Sweatshirt’s Some Rap Songs.  Where A Quiet Farwll, 2016-2018 acts as nightmare fuel, Wynton Marsalis’ soundtrack for the the biopic Bolden is suffused with joy.  Marsalis was the obvious candidate for the task of bringing the music of the unrecorded Buddy Bolden to life.  As with the initial recordings of Louis Armstrong, Marsalis' presumably accurate rendering of Bolden's joyfully defiant party music foreshadows much of what would follow, including the eerie sonic collages of one of the youngest members of America’s foremost musical dynasty.

---
I reviewed the Chicago Plan’s appearance at the Blue Room for Plastic Sax.

---
I suspect that the cover art of Ayanna Witter-Johnson’s Road Runner is a tribute to the image that adorns Joan Armatrading’s Track Record.  The art-pop collection is recommended if you like Esperanza Spalding, the new sound of London, Sting.  Here’s “Nothing Less”.

(Original image by There Stands the Glass.)
Posted by Happy In Bag at 11:05 AM No comments: 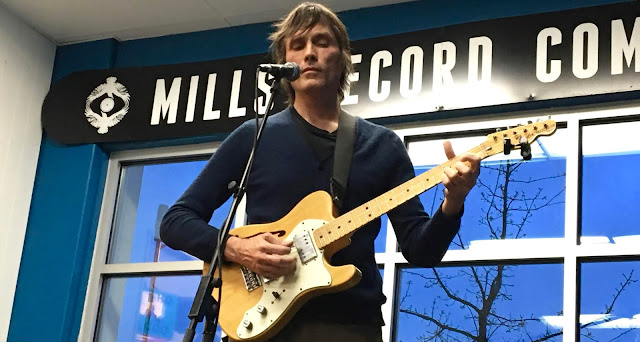 
I conducted the same exercise in January, February and March.

(Original image of Bill MacKay by There Stands the Glass.)
Posted by Happy In Bag at 12:25 PM No comments: 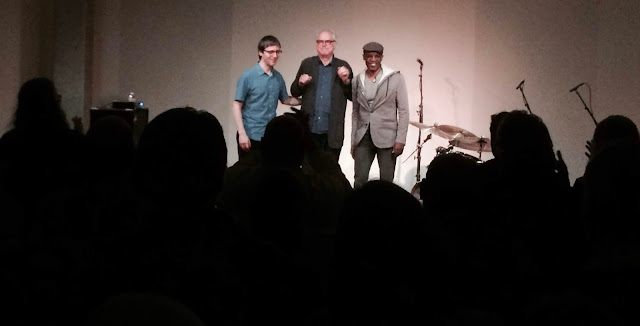 I deliberately avoided appearances by Bill Frisell at the Big Ears Festival in Knoxville last month.  I reasoned that I should focus on showcases by artists I’d never seen.  Even though I’ve heard the guitarist perform seven or eight times, I’m beginning to wonder if my reasoning was faulty.  Epistrophy, a set of astounding duets between Frisell and bassist Thomas Morgan recorded at the Village Vanguard, is yet another addition to the already staggering mountain of evidence that Frisell may be the most brilliant musician of our time.

---
I reviewed Chris Tomlin’s concert at the Sprint Center for The Kansas City Star.

---
I reviewed the Joshua Redman Quartet’s concert at the Folly Theater for Plastic Sax.

---
Lizzo tries way too hard on Cuz I Love You.  The anonymous production on her ostensible breakout album makes her alacrity even less appealing.  At least I’ll always be able to say “I saw her when.”.

---
Relentless Doppelganger, a live stream of malevolent bots creating entirely credible death metal, is as impressive as it is terrifying.

(Original image of Bill Frisell, Thomas Morgan and Rudy Royston by There Stands the Glass.)
Posted by Happy In Bag at 6:39 AM No comments: 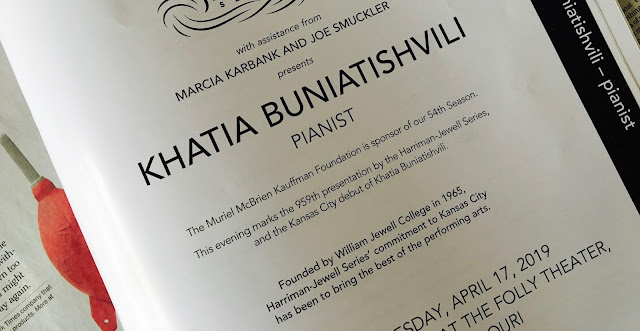 I’ve witnessed the cavorting of scantily clad pop stars, the testifying of sweaty soul men and the suggestive voguing of hyper-masculine country crooners in recent months.  None of these performers possessed even half of the charisma exuded by Khatia Buniatishvili at the Folly Theater on Wednesday.  While she and Sony’s marketing department don’t hesitate to capitalize on her looks, the celebrated pianist from Batumi, Georgia, boasts the sort of magnetism that transcends her pleasing visage.  The impeccable playing of Buniatishvili emphasized extreme dynamics in an enchanting program of Shubert.  She ecstatically tossed her hair, waved her arms and contorted her body during her Kansas City debut.  Just how captivating was Buniatishvili?  The majority of the audience of about 750 stuck around for the invariably dull artist interview that follows concerts in the Harriman-Jewell Series.  I’m not the only one who can’t get enough of Buniatishvili.

(Original image by There Stands the Glass.)
Posted by Happy In Bag at 11:35 AM No comments:

I don’t entirely trust my enthusiasm for Anderson Paak’s Ventura.  The album is so closely attuned to my sensibilities that I suspect it’s an algorithmic swindle.  Ventura resembles what might happen if the Music Genome Project, the uncannily perceptive program designed by the creators of Pandora Music, was commissioned to create music specifically for me.  The silky throwback soul of songs like “Make It Better” are frighteningly spot-on evocations of my sonic ideal.

---
I reviewed a recital by Assif Tsahar and Tatsuya Nakatani at Plastic Sax.

---
Before music streaming services became quick and (nearly) comprehensive, I’d occasionally go on excursions at the Free Music Archive in search of interesting variations on the jam-band sound.  I invariably came up empty.  Imperfection, the new release by the New York power trio Gorgeous!, is the sort of unpolished gem I’d hoped to discover at FMA.  The group sounds like the Jimi Hendrix Experience jamming on contemporary funk.  The album contains about 20 minutes of thrilling grooves.  Unfortunately, Imperfection rambles on for 98 minutes.

A drunk homophobe wanted to fight me because I wore a pink shirt to an Alan Jackson and Brooks & Dunn concert at Verizon Amphitheater in 2007.  I dressed less conspicuously when Brooks & Dunn headlined at the Sprint Center on its 2010 farewell tour.   Honestly, I haven’t given the duo much thought since then.  That’s why I’m astounded by my reaction to the 12 remakes featuring contemporary country stars on Reboot.  Absence definitely made my ears grow fonder.  Although I harbored only a mild affection for the songs when they were originally released, I shout along with Luke Combs on ”Brand New Man” and get weepy as Ashley McBride sings “You’re Gonna Miss Me When I’m Gone”.  The comeback album is so good that even the interpretation of “Boot Scootin’ Boogie” featuring Midland resembles an unexpected visit from a long-lost friend who doesn't care what I wear.

---
I’m still salty about the Dutchman’s listless performance at the Big Ears Festival last month, but the stirring convergence of new age, ambient and classical music on Henosis is precisely what I want from Joep Beving.  Here’s “Unus Mundus”.

(Original image by There Stands the Glass.)
Posted by Happy In Bag at 3:16 PM 1 comment: 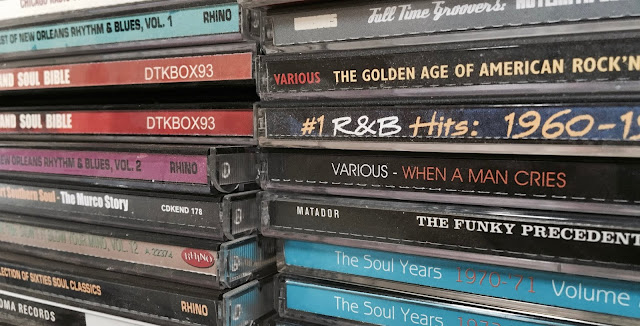 I like alcohol, but I wasn’t drinking.  I like dancing, but there wasn’t room to move.  I like parties, but I felt as if I was crashing a sloppy frat kegger.  And while I possess unconditional love for old-school R&B, I could hardly hear Durand Jones & the Indications over the din of drunken conversations.  Saturday’s sold-out show at RecordBar was an enormous letdown.  Opening band Ginger Root never stood a chance.  A friend tweeted that “I’m not sure I’ll see a better live show in 2019.”  Well, the performance by the soul revivalist band wasn’t even the best concert I attended in the past week.  I rave about a quartet led by Matt Otto at Plastic Sax.  Last night’s appearance by the Norwegian brass band tenThing was also superior.  I posted amusing footage at Instagram.

(Original image by There Stands the Glass.)
Posted by Happy In Bag at 6:49 AM No comments: 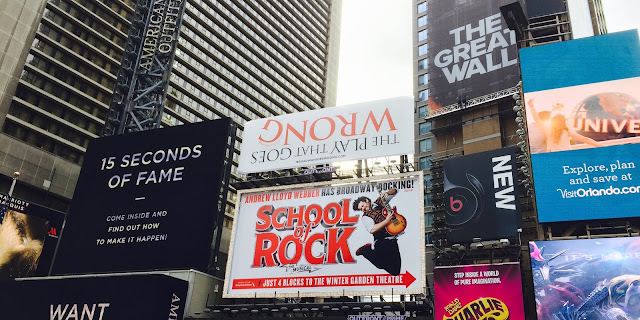 I was a member of the target demographic for the 1980 punksploitation flick “Times Square”.  As a disaffected teen stuck in the boonies and desperate for dispatches from the punk scene in New York City, I enthusiastically acquired the soundtrack and bought a ticket to see the film the week it opened.  This gullible rube was expertly played by a cynical marketing team that made Suzi Quatro’s “Rock Hard” the theme song of the deservedly forgotten movie.  Even though tracks including “Rainbow Shiner” on Ex Hex’s It’s Real are vastly superior to “Rock Hard,” the throwback “new wave” on the album catapults me back to an almost incomprehensibly foreign era.


---
I write weekly concert previews for The Kansas City Star and Ink magazine.

---
Nipsey Hussle was gunned down on March 31.  I don’t share the hip-hop community’s adoration of the rapper.  The memory of his dreary outing at the Granada in 2009 still grates on me.

---
There have been moments during the last 20 years in which I believed that attending Kansas City’s Rockfest was my sole reason to exist.  I don’t know what to do with myself now that this year’s blowout isn’t happening.

---
Marvin Gaye's You’re the Man, the would-be follow up to What’s Going On, is only half as good as his classic 1971 work.  But man, there are still a dozen spine-tingling moments scattered throughout the newly reassembled version of the nixed project.

---
Billie Eilish’s When We All Fall Asleep, Where Do We Go? is the love child of Lorde’s Pure Heroine and Taylor Swift’s Reputation.  Post Malone’s Beerbongs & Bentleys served as the midwife.  “Bury a Friend” is the baby picture the proud parents sold to a celebrity tabloid.

---
I paid $14 to hear The Wild Reeds and Valley Queen at RecordBar on Wednesday.  The show was altogether adequate.

(Original image by There Stands the Glass.)
Posted by Happy In Bag at 9:53 AM No comments: