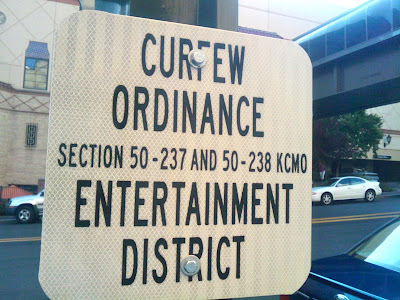 My responses to a meme initiated by The Guardian and prolonged by NPR Music.

2) What song always gets you dancing? "Mother Popcorn" by James Brown. Why?  My knees aren't broken.

3) What song takes you back to your childhood? "Daddy Sang Bass" by Johnny Cash. Why? I was reared on that stuff.

4) What is your perfect love song? "So In Love" by Curtis Mayfield. Why? The sound and the sentiment.

5) What song would you want at your funeral? "Aguas de Marco" by Antonio Carlos Jobim. Why? "It's the mud, it's the mud."

6) Time for the encore.  One last song that make you, you. "Bring the Noise" by Public Enemy.  Why? The contradictions.  The rage.  The mayhem. Chuck D's self-importance.  Flavor Flav's humor.

---
An update on South Park Mexican is headlined "Should Hip-Hop Artists Be Allowed to Release Albums From Jail?"  As a guy who once repped SPM albums, I believe the answer is "yes."  (Via S.S.)

---
I admired Merrill Garbus before I watched her new "What's In My Bag?" segment.  I love her now.

---
I heard Johnny Winter's 1974 rendition of "Stray Cat Blues" for the first time the other day.  That's evil going on.

---
Tom Ryan, an occasional commenter at There Stands the Glass, has died.

(Original image by There Stands the Glass.)
Posted by Happy In Bag at 11:58 AM 2 comments: 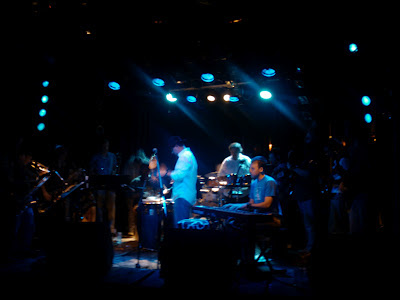 (Original image by There Stands the Glass.)
Posted by Happy In Bag at 7:08 AM 1 comment: 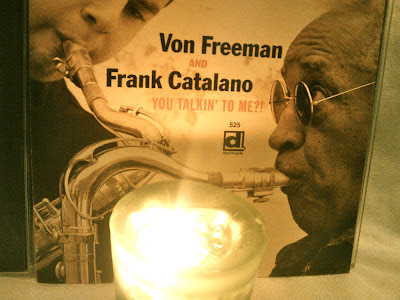 Jazz giants Charlie Parker, Charles Mingus and John Coltrane are rightfully celebrated.  The heart and soul of jazz, however, lies in the lives and legacies of musicians like Chicago's Von Freeman and Kansas City's Ahmad Alaadeen.  As Howard Reich's essential and astounding remembrance indicates, Freeman was more of a hometown hero than a universally hailed legend.  That doesn't mean that Freeman wasn't brilliant.  His ancient-sounding tone on the old-fashioned tenor battles on the pictured album gives  me chills.  While Frank Catalano holds his own, Freeman's out-oriented concepts are stunning.  I also love "Doin' It Right Now", "Vonski"'s brawny debut album as a leader.  Here's essential interview and performance footage from last year.  His rendition of "Bewitched, Bothered and Bewildered" from the same gig will break your heart.  Freeman died Saturday.

---
The EPK for Stevie Stone's new album makes a strong case for the commercial viability of the Strange Music artist.

---
Thanks to Good Music Alert, I'm aware of the new album by Curumin.

---
Kansas City Click: Hermon Mehari is at the Majestic on Tuesdays.

Guardian Alien appears at the RecordBar on Wednesday.

(Original image by There Stands the Glass.)
Posted by Happy In Bag at 11:51 AM 3 comments: 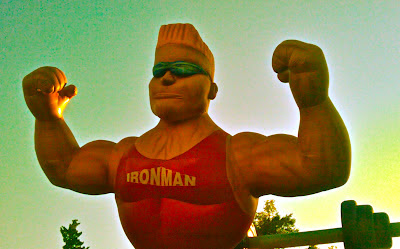 In spite of the content of my previous post, I'm not too proud to admit that sometimes music chooses the listener.  In a perfect world, I wouldn't even be aware of Turbonegro.  The sleazy punk/metal band is just plain filthy.  And I love it.  "You Give Me Worms" reflects the content of the new album Sexual Harassment.  Other choice tracks are titled "Dude Without a Face," "Shake Your Sh*t Machine" and "I Got a Knife."  Recommended if you like whiskey, drugs, prison, sex and prison sex.

---
Tim Finn wrote a remarkable story about the travails of the Architects' Keenan Nichols.

The Beaumont plays host to Helmet on Sunday.

Brad Leali returns to the Blue Room on Monday.

A very funny man appears at the Midland on Tuesday.

(Original image by There Stands the Glass.)
Posted by Happy In Bag at 12:39 PM 2 comments: 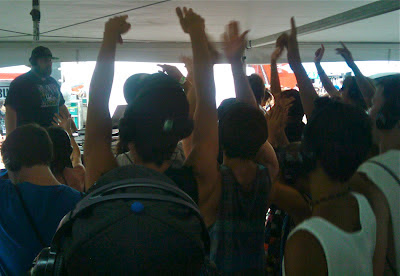 Finally!  A couple people with remarkably good taste were confounded that I didn't share their enthusiasm for Channel Orange.   "It's exactly your thing," I was repeatedly told.  One friend described the Frank Ocean album as a combination of Prince, Outkast and R. Kelly.  Yep- that's precisely my thing.  I stuck with it and began to appreciate the way "Crack Rock" swings, the literate flourishes in "Super Rich Kids" and the unrequited lust of "Pyramids."  The juxtaposition of André 3000 and Eddie Hazel-style guitar on "Pink Matter" also impressed me.  The entire project finally clicked a couple days ago when I rearranged the track order.  The album is sequenced all wrong.  My version of Channel Orange begins with "Bad Religion."   I haven't been a member of the cool kids' club for years, but finally tuning into Channel Orange provides me with no small degree of consolation.


---
Here's my review of Drowning Pool's under-attended concert at the VooDoo.

---
You're really blowing it if you've never attended one of the People's Liberation Big Band's monthly performances at the RecordBar.  Sunday's gig was astounding.

---
Grenadina's new six-song EP Pretend For Me is available as a "name-your-own-price" download at Bandcamp.  RIYL: L7, K Records.

---
Unusual items are in the bags of Stephen Malkmus and the Jicks.

White Wizzard is at Riot Room on Thursday.

(Original image by There Stands the Glass.)
Posted by Happy In Bag at 11:32 AM 4 comments: 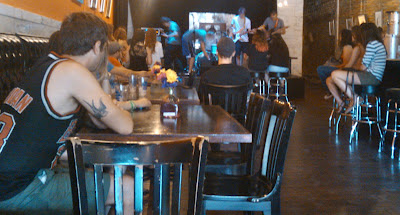 I almost became "that guy" last week.  Every music fan has watched people turn around at the door of a tavern when they realize that the room is dominated by loud musicians.  I almost joined that contemptible club last week.  Hungry and with an hour to kill before going to a different live music venue for a five-hour show, I stopped at Czar Bar at 6 p.m. to partake in its air conditioning, ice water and food.  A band was launching into a matinee performance.   With more than a little trepidation, I stayed to check out the emo-ish band The Author and the Illustrator.  I liked 'em.  My hamburger and fries were also very good, although at $13 plus tip, I'm far more likely to go out of my way to catch the Author and the Illustrator than splurge on another meal at the establishment on Grand Boulevard.


---
I'm still assessing the merits of The Cherry Thing.  I have no such reservations about Neneh Cherry's eclectic playlist.

---
It's a wonder that Foxygen didn't title its new album Through the Past, Darkly (Vol. 3).

---
My friend Steve Wilson is interviewed about his band the Liquor Buddies.

---
The comment thread at Tim Finn's review of a Big Time Rush concert is a thing of beauty.

---
The Mailbox, a weekly Kansas City-centric music program hosted by my friends Michael Byars and Chris Haghirian, is one of my favorite podcasts.  That said, my taste in music only overlaps with Chris' about ten percent of the time.

---
Kansas City Click: Look for me at the following shows: Drowning Pool returns to the VooDoo on Friday.

The Pitch Music Showcase is Saturday.

The People's Liberation Big Band celebrates its fourth year at the RecordBar on Sunday.

My Morning Jacket headlines at Starlight on Monday.

(Original music by There Stands the Glass.)
Posted by Happy In Bag at 3:16 PM No comments: 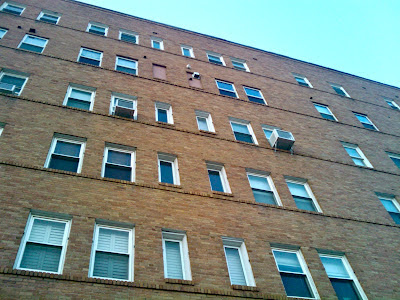 I love jazz that sounds like tomorrow rather than yesterday.  Christian Scott's new album Christian aTunde Adjuah fits the bill.  It's precisely what I want to hear from a young American jazz ensemble.  The musicians are clearly aware of hip hop, contemporary R&B and indie rock even as the music they play can't be mistaken for anything but jazz.  Instead of being cluttered with a plethora of guest features, it's recorded with Scott's working band.  I heard the double album for the first time yesterday, but I'm confident that Christian aTunde Adjuah will find a spot on my year-end Top Ten album list.  Here's the EPK for the album.


---
My review of last week's concert by Los Lobos, Making Movies and Maria the Mexican angered many readers.  For the record, Los Lobos was once my favorite rock band.

---
Saint Vitus will perform at the Granada in October.  I've never seen the influential metal band.

---
I just discovered that the Persuasions recorded at least one album of Dead covers.  Their version of "Ripple" is lovely.

---
Longtime readers of There Stands the Glass won't be surprised to learn that the new collection of material from Terje Rypdal makes me weak in the knees.

---
In case anyone was wondering, I'm still not over "Call Me Maybe."

(Original image by There Stands the Glass.)
Posted by Happy In Bag at 8:20 AM No comments: