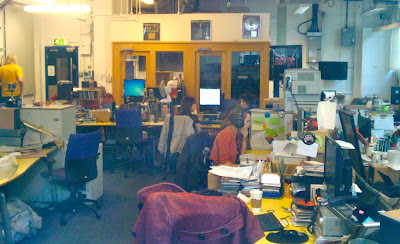 The youth hostile hostel where I rested in London earlier this month abutted the offices of BBC 1Xtra. I wistfully considered roads not taken as I longingly watched couriers and employees bustle in and out of the Marylebone office. As the accompanying photo indicates, I compulsively creeped on the station's staff. Because internet access is shockingly shoddy in London, I wasn't able to properly listen to 1Xtra's broadcast until I returned to Kansas. It's delightful to discover that acts like Estelle and Tinchy Stryder are proper stars in G.B.


---
I haven't had time to process the passing of Earl Scruggs.

---
Synesthesia, the new release by thePhantom*, contains a nice mix of the styles of Tech N9ne and Fat Tone.

---
I'm eager to spend quality time at Cultural Equity, but the Lomax archive is aggravatingly buggy.

---
I'm not in love with the new album by THEESatisfaction, but I expect that the neo-soul/hip hop project could grow on me.

---
By midnight I'll have taken in 57 individual live performances in the past three months. It would seem that my streak of catching over 365 gigs a year will end in 2012.

(Original image by There Stands the Glass.)
Posted by Happy In Bag at 11:56 AM No comments: 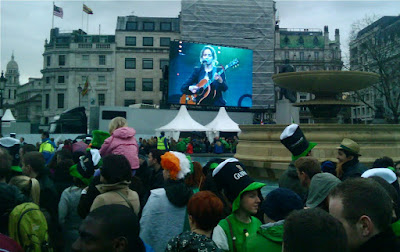 I'm a fussy meticulous concertgoer. I plan ahead and leave little to chance. That's why I almost lost my mind under the watchful eye of Admiral Nelson in Trafalgar Square earlier this month. A handful of decent acts were scheduled to play at a massive Saint Patrick's Day celebration. Imagine my chagrin when I arrived at the landmark only to discover a dreadful Swiss chanteuse performing to a lethargic audience of a few hundred people. Something called Francais l'Adore was transpiring on the Irish holiday. I love my French-speaking friends, but man, this event was a logistical and musical disaster. It turns out that the proper Irish event is held the day after St. Patrick's Day. (Of course it is!) I diligently showed up the next day to catch part of a bland set by the lovely Gemma Hayes. The crowd was so big (and drunk) that I fled after thirty minutes.

---
Tech N9ne and DJ Sku are interviewed by Shorty And The Boyz for something called Breal.tv.

---
The Free Music Archive tipped me off to Lacrimosa, a new release by Plaistow on European free jazz netlabel Insubordinations. Recommended to fans of Terry Riley.

---
I've never been ashamed of my deep affection for the music of Lionel Richie, but his new set of tepid Nashville remakes is testing my patience.

Milagres return to the Riot Room on Thursday.

(Original image by There Stands the Glass.)
Posted by Happy In Bag at 9:34 AM 4 comments: 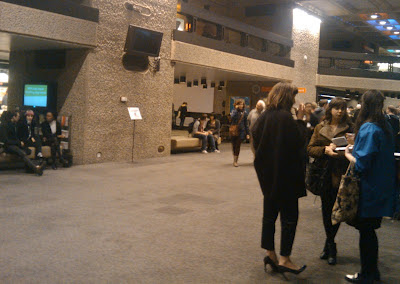 An odd event at the Barbican Centre last week seemed to point to the future of the classical music concert-going experience. Over 1,500 youthful hipsters attended the innovative double feature. The Britten Sinfonia orchestra performed world premieres of compositions by Nico Muhly and Owen Pallett in the first half of the concert.

The piece by Pallett- a violinist and arranger with credits on recordings by R.E.M., The National and Arcade Fire- was dreadfully scratchy and painfully dry. Muhly's effort was much more enjoyable. He's perhaps best known for his work with Bjork, Grizzly Bear and Antony and the Johnsons. A lush work by Missy Mazzoli rounded out the classical portion of the show.

Muhly led an arty set of chamber folk after intermission. A surprising meditation on Neil Young's "Only Love Can Break Your Heart" and a creepy rendition of "The Twa Sisters" floored me. I was less impressed by several self-conscious displays of Muhly's technical prowess.

Even so, I loved the cross-genre concept. I can't pretend to know if British kids receive much exposure to symphonic productions, but a similar audience in the United States would include many people who'd never previously experienced the unique power of three dozen classically-trained musicians playing as one. I suspect that many will be inclined to return to the home of the London Symphony Orchestra.


---
I purchased nine hours of Johann Sebastian Bach recordings for 99 cents at Amazon. The old recordings were made "before a tendency to reduce the size of choruses and orchestras and play with a sharp eye toward period practice had set in, and they may sound dated to some ears," according to a story by Daniel J. Wakin in The New York Times. That's a fair analysis, but I dig the overblown old-school approach. The deal ends Friday, March 23.

----
"All the people that you can't recall…" It's probably been five years since I last listened to Little Feat. That's too long.

---
I'd trade the entire Sharon Jones catalog for Lee Fields' new album on Truth & Soul. It's that good.

(Original image of the Barbican lobby by There Stands the Glass.)
Posted by Happy In Bag at 5:33 PM No comments: 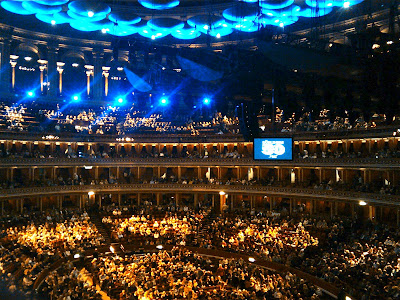 I fulfilled a lifelong dream last week by squeezing into a nearly sold-out concert at Royal Albert Hall. The grand old room is a real beauty.

A deliriously celebratory performance by The Dubliners made the fulfillment of my ambition especially sweet. The band is celebrating its fiftieth anniversary. While the current cast is a group of frail survivors, the legendary act managed to enhance its legacy at the familiar venue by playing masterfully for well over two hours. The band dealt with the sad absence of its most revered members by occasionally strumming along to video footage of their old friends. Seeing the late Luke Kelly belting out "Monto" moved me to tears even though I may have been the only person among the 5,000 souls on hand without a drop of Irish blood.

Everyone else, however, was in their element. I'm reluctant to reinforce stereotypes, but the audience went berserk during renditions of alcohol-themed classics like "Seven Drunken Nights" and "Whiskey In the Jar". How the Guinness flowed!

---
Kansas City Click: We Were Promised Jetpacks perform at the Riot Room on Tuesday.

New Jazz Order and the Boulevard Big Band compete in a battle of the big bands Thursday at Californo's.

(Original image of Royal Freaking Albert Hall by There Stands the Glass.)
Posted by Happy In Bag at 4:05 PM No comments:

Just a Closer Walk With Thee 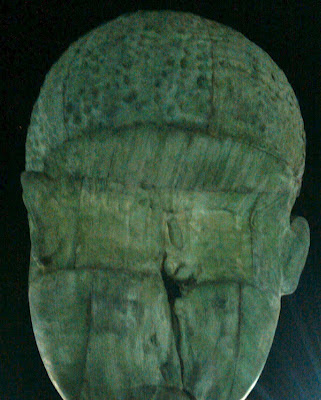 Bragging about a Pandora station is akin to blabbing about a basketball tournament bracket or a fantasy football team. I realize it's tedious, yet I just can't help it. Since Lent began February 22, the Pandora station that corresponds to this blog has kept me company on sixteen solitary walks. (I think you need a Pandora account to listen.) One rainy night it played consecutive deep tracks by Bert Jansch, Robbie Basho, My Morning Jacket, Simon & Garfunkel and Ralph Stanley. Just a closer walk with thee, indeed.

My only beef, in fact, is that the playlist tends to get stuck in a single genre. The other day I spent 45 minutes listening to nothing but vintage reggae acts like Culture, Jackie Mittoo and U-Roy. The station also goes on extended Brazillan, Tejano, blues, bluegrass and funk jags. (The station's advertisements, incidentally, are in Spanish.)

I'm tempted to add more variety but I'm afraid I'd have to resume culling out stuff I don't like. Adding Nina Simone, for instance, might cause Diane Schuur to pop up. Suggesting I want to hear more Raphael Saadiq might lead to unwanted tracks by John Legend. I currently only need to "thumbs-down" stray underground hip hop tracks that glorify marijuana. I'll be taking a blogging break, so feel free to enjoy my station in my absence. Please let me know if you hear anything that's less than sublime.


---
Sketchy vocals aside, this new track from New Riddim is solid.

---
The schedule for the Middle of the Map festival has been published.

---
I enjoyed reading the backstory of the final years of the fanzine-turned-magazine Jetlag.

(Original image by There Stands the Glass.)
Posted by Happy In Bag at 5:51 AM 6 comments:

The Sound of Class Warfare 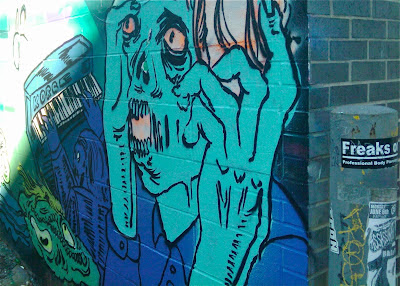 My opinions about Super Tuesday, Rush Limbaugh, the status of the Euro and tensions between Israel and Iran have no place at There Stands the Glass. Yet after perusing the responses to the announcement of the lineup for Kansas City's annual Rockfest I can not longer keep my thoughts on a music-related social issue to myself.

"I'm sure there will be 50,000 rowdy losers in Harley shirts and ripped blue jeans throwing their cigarette butts all over Liberty Memorial," sniffed a commenter at a popular music blog. "Me? I'm excited about Radiohead on Sunday. I doubt many Rockfest attendees will be at that show. God, I hope not."

What an ostentatious snob! I'm repulsed when music is employed as a signifier of cultural superiority. It doesn't matter if it's a Radiohead proponent looking down at a Shinedown fan, an opera lover dismissing pop music. a backpacker advocate of the Roots mocking kids who like Soulja Boy or a guy in a Miles Davis t-shirt ridiculing Kenny G. Such elitist dismissals are often rooted in caste and class rather than in actual music preferences.

I'm not suggesting that Flo Rida is the artistic equal of Ornette Coleman. He's not. But gratuitously dismissing fans of "bad" music as uneducated morons isn't merely offensive. Such aspersions often betray an economic and sociological bias. Besides, I love this song.


---
I reviewed Saturday's concert by The Kansas City Jazz Orchestra.

---
The Spinto Band proves that there's still life in a popular meme in its excellent spoof of SXSW.

---
Ronnie Montrose has died. I remember being titillated by the album cover of Jump On It.

---
The new Vijay Iyer album really is all that.

The Chieftains perform at Helzberg Hall on Wednesday.

Alaturka returns to the R Bar on Thursday.

(Original image by There Stands the Glass.)
Posted by Happy In Bag at 6:31 AM 2 comments: 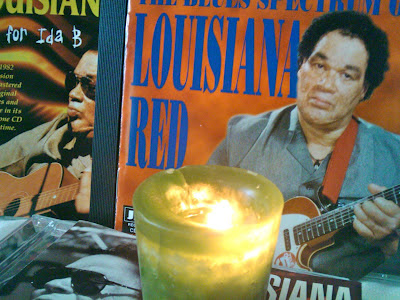 Louisiana Red and Red Holloway died on February 25. Both men regularly appeared on Kansas City stages. Louisiana Red was in the area three or four years ago for the Kansas City Kansas Street Blues Festival. The bluesman was so compelling that I insisted the members of my compound attend his performance later that evening at BB's Lawnside BBQ. "My uncle used to beat me," Red says in his introduction to the typical "Orphanage Home Blues". I loved that man. Red Holloway last performed in Kansas City in 2009 as part of Kevin Mahogany's band in a tribute to Joe Turner at the Folly Theater. I also recall seeing the saxophonist at the same venue with Jay McShann.


---
"Everything Is Fine" with Josh Turner. Here's my review of last night's concert at the Uptown Theater.

---
"Pleasant Valley Sunday" was one of the first pop songs to captivate me. Farewell, Davy Jones.

---
The Kansas City Rock and Roll History Project catches up with Ray Hildebrand, a man best known as "Paul" of Paul and Paula.

---
Here's an excellent EPK for the new Billy Hart album.

---
My affection for SSION's "My Love Grows in the Dark" video is unhealthy. (Tip via Wayward Blog.)

---
I'm mystified by the critical enthusiasm for Grimes.

(Original image by There Stands the Glass.)
Posted by Happy In Bag at 1:39 PM No comments: