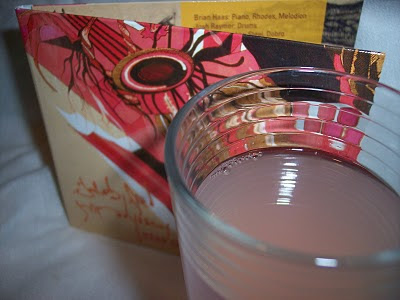 John Zorn's tribute to Ennio Morricone, The Big Gundown, had a profound effect on my impressionable ears twenty years ago. The album altered my perception of jazz and noise. I still listen to it periodically and I'm always left wishing that Zorn had paid more reverent tribute to Morricone's work on Spaghetti Westerns like A Fistful of Dollars, Once Upon a Time In the West, and everyone's favorite, The Good, the Bad and the Ugly. The Jacob Fred Jazz Odyssey fills that void with its new Stay Gold album. Morricone's music was probably the last thing on the minds of the band's members as they created the project, but the cinematic scope of the instrumental album, flavored with haunting lap steel, is as vast as the Oklahoma prairie. I love it.

---
Last night's Snoop Dogg concert was the best I've experienced. And Ice Cube stepped on my fingers! Here's my review.

---
My review of the new James Christos EP is here.

---
Josh Broadhead of Kansas City's Saved By Grace has died.

---
Nelly won't be playing in Branson after all. (Tip via Tony's Kansas City.)

Steddy P returns to the Czar Bar on Saturday.

As I noted at Plastic Sax, Mark Lowrey will record an album Sunday at Jardine's.

My top five picks for Warped Tour on Monday are Andrew W.K., Pennywise, The Reverend Peyton's Damn Big Band, Whitechapel and Dillinger Escape Plan.
Posted by Happy In Bag at 4:03 PM No comments:


Unless I secure a designated driver, I'm not going to see Archeology when they perform seven miles from my home tonight. I'm not drinking. Rather, I'm so sleep-deprived that I'm actually hallucinating. I don't trust myself to make the trip in the dark. Memorial, Archeology's new album, contains the same sort of lush folk-based pop that has made Mumford & Sons and Blind Pilot fledgling stars. I hope to have sweet dreams about the Portland band's music tonight.

---
I'd almost forgotten just how much I love The New Pornographers. Here's my review of last night's concert in Lawrence.

---
Ultimate Fakebook is offering their new album as a free download. (Tip via The Pitch.)

---
"The queen of the bolero," Olga Guillot, died earlier this month.

---
Kansas City Click: As noted above, Archeology appears Tuesday at The Record Bar.

Remember Sister Hazel? The band will be on the Power & Light stage Wednesday.

Abstract Rude plays The Record Bar on Thursday.
Posted by Happy In Bag at 11:43 AM 2 comments:

Busy In the Vizzy Zone


I've regularly noted the rising star of Wichita's XV at There Stands the Glass. Unless B.o.B has stolen his thunder, it would appear that a modicum of stardom may be just months away for the Kansan. The embedded video of Seven creating a track for XV mesmerized me when Demencha brought it to my attention last week. And Credentials Hip Hop offers a new interview with XV.

Devo is the highlight of Friday's bill at City Market.

Alaturka return to Jardine's on Sunday.
Posted by Happy In Bag at 8:23 PM No comments:

I Fall To Pieces


My feelings were hurt a year or two ago when my friend BGO characterized There Stands the Glass as the "death blog." That's not how I see it. Yet the bad news has been so relentless this week that I'll reluctantly embrace the concept for this post.

Some songs seem as if they've always existed. "I Fall To Pieces" and "Make the World Go Away" are just as much a part of the natural order of things as the wind and the tides. It seems absolutely astounding, consequently, that until yesterday, the man largely responsible for those songs walked among us.

Other recent deaths of note:

Tuli Kupferberg of the Fugs- here's a would-be hit.


---
Kansas City Click: I'm not the least bit pleased that Big Boi is purportedly appearing Friday at the ritzy Jones Pool. I don't have a thing to wear!

The Jeff Hamilton Trio returns to Jardine's on Friday and Saturday.

I caught the Doobie Brothers/Chicago tour a couple years ago. Not bad at all. And I don't care what anyone thinks- this is my jam. They trot out the hits again Sunday at Starlight.
Posted by Happy In Bag at 12:21 PM 2 comments:

Non-Review: Steddy P- While You Were Sleeping 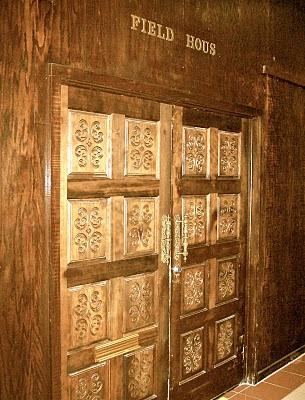 In the column to the right you'll see that Steddy P's Style Like Mind was my #7 album of last year. I stand by that assessment. I haven't listened to the brand new mixtape by Steddy P and DJ Mahf only because I'm completely obsessed with "Teqkilla," the fourth track on the M.I.A. album that also hit the streets today.

In lieu of a proper There Stands the Glass review, here's largely unfiltered hype from Indyground:

While You Were Sleeping, a collaborative effort from the "Show Me State" duo Steddy P & DJ Mahf, celebrates two years of music and touring across the Midwest. The project begins with Side A, a brand new EP from Steddy and Mahf... On Side B, DJ Mahf handles the Mixtape portion remixing popular songs from Steddy's catalog with the finest variety of hip hop beats spanning the last fifteen years. While You Were Sleeping is over an hour of FREE, never before heard music from Steddy P & DJ Mahf.

Get the free mixtape here. Watch the video for "And It's Like That" while it downloads.

(Random unrelated original image by There Stands the Glass.)
Posted by Happy In Bag at 1:24 PM No comments: 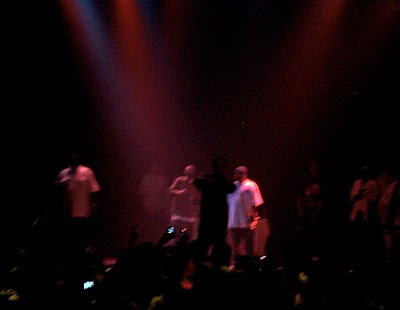 (Original image by There Stands the Glass.)
Posted by Happy In Bag at 8:54 AM 2 comments: 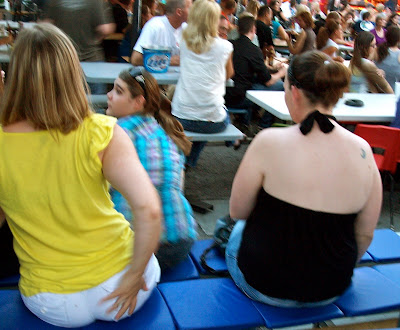 Bob Schneider couldn't get the line about Kansas City's "crazy little women" out of his head Tuesday. He made several references to the Leiber and Stoller song during his performance at Knuckleheads. Who could blame him?

The vast majority of the 200 people on hand were women. And a lot of them were, in fact, acting a little crazy. A handful of songs like "2002" aside, I could take or leave most of his stuff. Even my date, a woman compelled by the breathless ravings of her friends to attend, wondered what all the fuss was about.

"Bob Schneider is OK," she suggested, "But I'd rather see Howard Iceberg."

---
I've seen the likes of Mickey Gilley, Ray Stevens and the Baldknobbers in Branson, but I'm eagerly awaiting the day when artists like Aerosmith and Run-DMC run the town. It starts next month with Nelly.

E-40 headlines a massive show on Sunday that also includes The Jacka, Lee Majors, Rich the Factor, Berner and Ampichino.

(Original image by There Stands the Glass.)
Posted by Happy In Bag at 1:20 PM 2 comments: 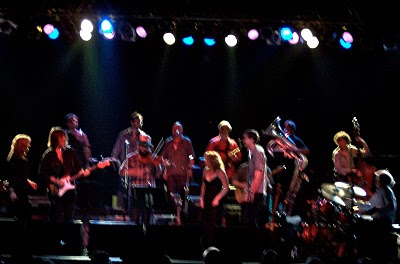 
---
Music industry icon Harvey Fuqua has died. This footage is a treat.

---
Steddy P invokes "the ghost of the jazz era" in his new video for "It's Like That".

---
Kansas City Click: Tim Whitmer is joined by Stan Kessler and Kim Park at Unity on the Plaza on Wednesday.

(Dark and blurry original image by There Stands the Glass.)
Posted by Happy In Bag at 9:30 AM No comments: 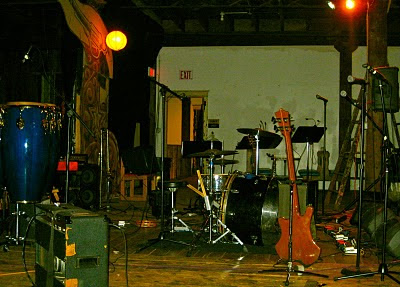 The highest praise that can be heaped on the stellar new self-titled recording by Hearts of Darkness is that the document successfully captures much of the energy of their live performances. The album crackles with energy.

By the time I was born the heyday of Kansas City jazz was already decades past. As I noted in 2009, however, using the same instrumentation as the legendary jazz bands of the '30s and '40s, Hearts of Darkness capture some of the same vital spirit of that era. While a few local musicians work in that vein today, ttheir work is inevitably imbued with a sense of nostalgia. Based in the Afrobeat of Fela, Hearts of Darkness only allude to the bands of Jimmy Lunceford and Benny Moten.

A free download of "Step First Look Last" is available here. The entire album will be available for purchase at the band's July 10 gig at Crosstown Station .

---
It's time to catch up on my concert reviews- here are my efforts for the following shows: Tool and Woven Hand, Roger Daltrey, Tim McGraw, Lady Antebellum and Love and Theft and 311, Offspring and Pepper.

(The Hearts of Darkness review is cross-posted from Plastic Sax.)
Posted by Happy In Bag at 6:52 AM No comments: