Concert Review: Lecrae at the Truman 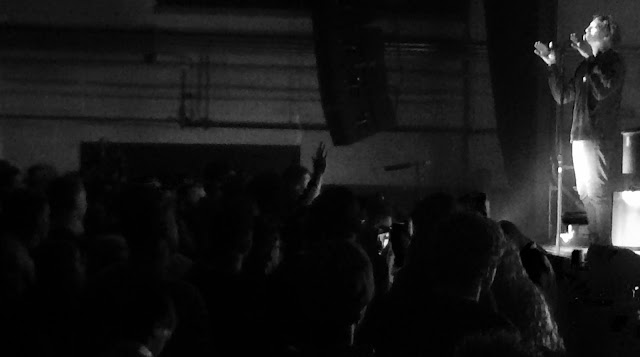 Lecrae isn’t my favorite Christian rapper.  That’d be Kanye West.  Kendrick Lamar and Chance the Rapper are right behind him on my list.  Unlike those artists, Lecrae is burdened with the cumbersome label.  Yet all four rappers address the ways in which their faith influences their perspectives on matters including race and social justice.

Lecrae practically dared the approximately 600 white members of the audience of about 1,000 to walk out of his show at the Truman on Saturday.  In a prologue to “Facts”,” a confrontational song about the separation he feels from his white Christians fans, Lecrae explained that they can’t possibly understand the challenges associated with being black in America.

I didn’t see anyone leave.  Lecrae has already been shunned by listeners who didn’t appreciate his embrace of the Black Lives Matter movement and the secular creep in his hip-hop.  He drew more than 5,000 people to a sold-out concert in Independence three years ago (my review for The Kansas City Star).  Saturday’s dramatically reduced audience consisted of diehard fans.

Accompanied by four musicians and two dancers, Lecrae featured songs from his new album All Things Work Together.  Their renditions of ”I’ll Find You”, ”Blessings” and ”Hammer Time”- songs that struck me as overly commercial when I first listened to the project- made the selections seem profound.  I don’t intend to walk out on Lecrae anytime soon.

---
The jazz vocalist and drummer Grady Tate has died.

---
Jimmy Beaumont of the Skyliners has died.  (Tip via BGO.)

---
Kelela’s Take Me Apart is the latest in an extensive list of acclaimed art-oriented (ostensibly) R&B albums released in 2017 that fail to move me.  Among the other notable offenders: Sampha’s Process, Ibayi’s Ash and Moses Sumney’s Aromanticism.  I call shenanigans.  These unbearably pretentious emperors and empresses have no clothes.

---
An in-store performance by JD McPherson and his band at Vinyl Renaissance floored me a couple weeks ago.  I hadn’t grasped that the group was truly exceptional.  The passion and the craftsmanship of the musicians make most of the ballyhooed garage-rock bands signed to Burger Records seem like chumps.  ”Lucky Penny” may be the weakest song on the new album Undivided Heart & Soul.

---
Baby Talk, a document from a 2015 meeting between The Thing and James “Blood” Ulmer, is skronk heaven.

----
Johnny O’Neal’s In the Moment makes the lush life seem so appealing that I’m fighting the urge to put on a suit, make a beeline for the nearest piano bar and drink until I fall off a barstool.  The album’s EPK is engaging, but it doesn’t touch on O’Neal’s health struggles or the sense of wistfulness that permeates the project.

---
I draw strength and inspiration from Marvin Sapp’s Close.  Here’s the title track.

(Original image by There Stands the Glass.)
Posted by Happy In Bag at 1:21 PM