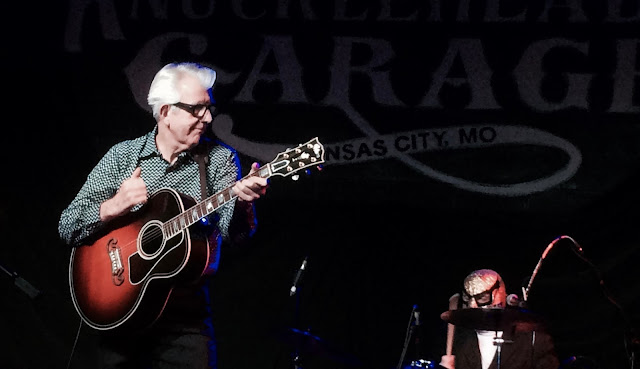 I had no intention of attending Nick Lowe’s concert at Knuckleheads when I woke up last Wednesday.  My itch for nostalgia had been thoroughly sated at the previous week’s Janet Jackson’s concert.  My life partner wasn’t having it.  In an uncommon role reversal, she dragged me to see the Jesus of Cool.  The opening salvo of “So It Goes,” “Ragin' Eyes” and “Without Love” compelled us to shimmy in front of the stage like it was 1987.  The masked surf-rock ensemble Los Straitjackets, Lowe’s backing band, struck the proper balance between reverence and relevance.  I’m pleased as punch that the bride still rock-and-rolls.


---
The production at Arcade Fire’s appearance in Independence was the most impressive display I’ve encountered since Kanye West’s Yeezus tour touched down at the Sprint Center in 2013.  Here’s my review for The Kansas City Star.

---
George Young, a genuine rock Zelig, has died.  Many of his obituaries fail to mention his role in Flash and the Pan’s forgotten 1976 hit “Hey, St. Peter”.

---
Chuck Blackwell, the Tulsa based drummer who performed with the likes of Leon Russell and Joe Cocker, has died.  (Tip via BGO.)

---
I prefer Lee Ann Womack’s throwback country on The Lonely, the Lonesome & the Gone to Margo Price’s more progressive All American Made.  Unconcerned with- and probably indifferent to- the current climate, Womack evokes dusty albums by the likes of Elvis Presley, Dolly Parton and Glen Campbell.  Price sounds as if she’s consciously competing with Sturgill Simpson and Chris Stapleton.  Here are Womack’s “Sunday” and Price’s “Weakness”.

---
The rough-and-tumble blues-rock set by Cinderella’s Tom Keifer at Rockfest was one of the year’s most pleasant surprises.  Although The Way Life Goes is substantially cleaner than the show in June, it still impresses me.  Here’s the representative “The Way Life Goes”.

---
Not surprisingly, I’m smitten by Agrima, the new album by Rudresh Mahanthappa and the Indo-Pak Coalition.

---
I had a violently allergic reaction to Live in Montreal, a duet album by Edgar Castaneda and Hiromi.  RIYL: leaf blowers, Friday Night in San Francisco, ostentatiousness.

(Original image of Nick Lowe by There Stands the Glass.)
Posted by Happy In Bag at 7:26 AM

We can do a lot worse than Margo Price, so give her some slack.

And yes, Womack's new one is a contender for album of the year.

Bless you for your call on Flash In The Pan.

I saw Rockpile and you didn't.

The downside was they were third on a triple billing and regulated to a 30 minute slot, which went by in a flash. Sometimes Rock & Roll history is no fun at all.