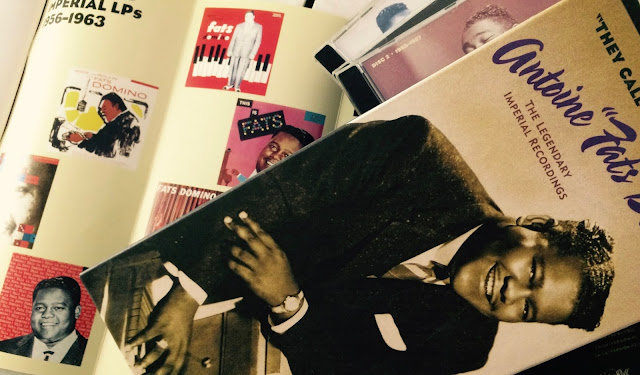 I’ll share an extremely unflattering anecdote as I note the passing of Fats Domino.  I sat next to the noted New Orleans based music journalist Jeff Hannusch, the author of I Hear You Knockin: The Sound of New Orleans Rhythm and Blues, on a bus during a music industry convention in the 1990s.  When the conversation inevitably turned to Domino, I told Jeff that I regretted my recent purchase of the icon’s four-CD, 100-song box set that includes his expansive liner notes.  I explained that the single disc compilation I already owned was more than enough Fats for any reasonable person.  I think Jeff might have quit talking to me.  Not only was I a jerk, I was wrong.  There could never be enough of the Fat Man’s seminal American music.

---
My review of a performance by the Owen/Cox Dance Group and the People’s Liberation Big Band at Polsky Theatre is at Plastic Sax.

---
Christian Scott aTunde Adjuah’s The Emancipation Procrastination may be the best of the three albums the polarizing jazz artist has issued in 2017.

---
I’ve long been enamored of Chanté Moore.  The Rise of the Phoenix is a delight.  Here’s ”Something to Remember”.

---
I lost my taste for Magnetic Fields somewhere along the way.  I’m sure I’d admire a handful of songs on 50 Song Memoir, but I’m not willing to invest the time to find them.

(Original image by There Stands the Glass.)
Posted by Happy In Bag at 11:56 AM