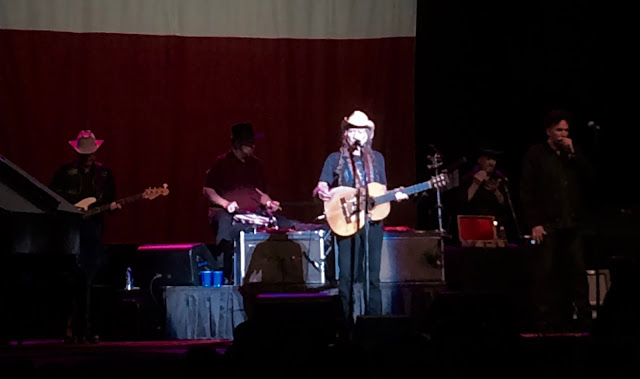 To paraphrase Waylon Jennings’ 1977 hit, I was raised on Hank Williams' pain songs, Mickey Newberry's train songs and “Blue Eyes Crying in the Rain.”  Willie Nelson has been a more integral part of my life than any other musician.  He and I have both changed considerably through the decades.  During renditions of “Nuages” and “Funny How Time Slips Away” on Wednesday, the icon and I might have been the only people at Starlight Theatre who believed they were at a jazz concert.  Nelson’s vocal phrasing and guitar technique were squarely in the tradition of Louis Armstrong, Django Reinhardt and Billie Holiday.  I realize it sounds odd, but Nelson is one of my favorite jazz artists.

---
El Factor, Rich the Factor’s third album of 2017, further confirms what I tell anyone willing to listen to my ranting- the rapper is Kansas City’s most consequential musician.

---
Our Point of View, a new release by an ensemble appropriately billed as the Blue Note Records All-Stars, is much more than a generic jam session.  RIYL: Ambrose Akinmusire, up-to-the-minute jazz, Robert Glasper.  Here’s ”Second Light”.

---
Considering he’s imprisoned, Kevin Gates’ By Any Means 2 is more than adequate.  Here’s “Why I”.

---
Sweet Pea Atkinson’s Get What You Deserve is at the center of my wheelhouse.  RIYL: Bobby “Blue Bland, self-aware soul, Bobby Womack.

---
Ladilikan, a collaboration between the Kronos Quartet and Trio Da Kali, is a few notches too delicate for me.

---
The chitlin-circuit soul of Ms. Jody’s Thunder Under Yonder brings me so much joy that I forgive her for conflating Spanglish and Jamaican patois on a goofy interpretation of “Stir It Up.”

---
Jonas Kaufmann is transcendent on L’Opéra.

(Original image by There Stands the Glass.)
Posted by Happy In Bag at 2:02 PM