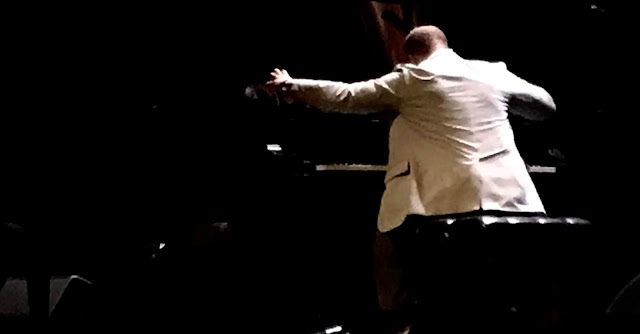 I booked a trip to Knoxville hours after discovering that the 2019 edition of the Big Ears Festival would serve as a fiftieth anniversary celebration of ECM Records.  As my ranking of 30 sets indicates, I didn’t limit my Big Ears experience to music associated with my favorite record label.

1. Art Ensemble of Chicago- Tennessee Theatre
Largely because I took in performances by the groundbreaking band during its heyday, I was skeptical about Sunday’s show.  Rather than attempting to recreate past glories, the group morphed into a rambunctious big band for the festival’s grand finale concert.  Even without the late Lester Bowie, Malachi Favors and Joseph Jarman, the Art Ensemble of Chicago continues to exude a sense of barely controlled chaos.

2. Artifacts Trio- St. John's Cathedral
The astounding new wave of forward-thinking Chicago jazz musicians rarely perform in Kansas City.  Even before I spotted Tomeka Reid on stage with the Art Ensemble of Chicago two days later, the ferocious outing by Reid, Nicole Mitchell and Mike Reed on Friday made me realize that they’re worthy heirs of that vital legacy.

3. Meredith Monk’s Cellular Songs- Bijou Theatre
Not only did I shed tears of joy on Friday, I guffawed so strenuously that people five rows in front of me turned to stare at my disruptive responses to Monk’s life-affirming work.

4. Mary Halvorson’s Code Girl- The Mill & Mine
Mary Halvorson was the most divisive artist on the lineup.  Heated arguments frequently broke out when her name was mentioned.  Halvorson’s dissonant attack elicits harsh rebukes from detractors while her advocates insist she’s the most significant guitarist to come along since the Big Three of Bill Frisell, Pat Metheny and John Scofield.  I’m no longer a doubter.  (The presence of the brilliant Ambrose Akinmusire didn’t hurt.)

5. Evan Parker’s Trance Map Plus- Bijou Theatre
What sorcery is this?  The septuagenarian’s perpetual embrace of the future makes him my role model.

6. Rhiannon Giddens- Church Street United Methodist Church
Giddens is a wondrous musical presence, but I predict that she’ll hold an even greater role as a prominent public figure 20 years from now.

10. Roomful of Teeth- Knoxville Museum of Art
The members of the a cappella vocal ensemble resemble the weird aunts and uncles of Pentatonix.

12. Vijay Iyer and Craig Taborn- Tennessee Theatre
Iyer needs to calm down. His everything-at-once assault in a duo with Taborn was often overbearing.  The less frenetic passages were extraordinary.

13. Evan Parker's Trance Map Plus- The Mill & Mine
I fell in love with Big Ears when the festival announced this 10 a.m. pop-up exhibition of free jazz.

14. Tim Berne’s Snakeoil- Bijou  Theatre
As we say in Kansas, “that’ll put hair on your chest!”  The skronk-oriented saxophonist joked that “it’s entirely possible we’ll get dropped by the label between the third and fourth tunes.”

16. Kristín Anna Valtýsdóttir- St. John's Cathedral
I’ll cop to showing up just to gawk at the twins depicted on the cover of Belle & Sebastian’s classic 2000 album Fold Your Hands Child, You Walk Like a Peasant even though I was certain I’d loathe their frail music.  Instead, I was captivated by the convincing performances of Kristín Anna and Gyða Valtýsdóttir.  Like characters who escaped from the pages The Lord of the Rings, the sisters transported me to an alternate universe.  The plant seeds they hawked were among the festival’s most tempting merch offerings.

18. Nik Bärtsch and Ronin- Tennessee Theatre
I assume the festival attendee who wore a King Crimson t-shirt is an even more ardent fan of Ronin than I.  The Swiss pianist and his collaborators including a saxophonist named Sha play prog-tinged jazz.

19. Jack DeJohnette, Ravi Coltrane and Matthew Garrison- Tennessee Theatre
The trio has improved immensely since I caught it in Kansas City two years ago.

20. Mercury Rev- The Mill & Mine
Loud rock and roll guitars sound especially good near the end of a jazz-filled day.

22. KTL- The Mill & Mine
The kids sprawled out on the floor during the loud drone cultivated by Stephen O'Malley and Peter Rehberg had the right idea.

23. Nils Frahm- Tennessee Theatre
Frahm was intent on making certain everyone at his elaborate one-man show understood that he’s extremely talented.  His curiously bass-free version of EDM didn’t do much for me, but I won’t be surprised if Frahm soon headlines 1,000-capacity venues.

25. Joep Beving- Knoxville Museum of Art
Beving boasts more streams on Spotify than any artist at the festival.  The Dutchman’s effort was mystifyingly dull.

26. Moor Mother- The Standard
I’m willing to accept the possibility that the essence of this set sailed far over my head.

28. Harold Budd- Bijou Theatre
29. Harold Budd- St. John's Cathedral
I take no pleasure in reporting that the ambient legend’s rare appearances were unmitigated disasters.  I went back for a second round only to verify my deeply distressing diagnosis.


What About Sons of Kemet and Makaya McCraven?
I intended to spend Saturday night at the Mill & the Mine sampling local beers while grooving to two of the most exciting acts in the world.  Yet after experiencing fatigue-induced hallucinations early Saturday evening- I didn’t consume any intoxicants during the festival- I elected to turn in early.

Wait For It...
I didn’t attempt to secure a media pass.  Instead, I paid $246.40 for a general admission wristband.  Consequently, I spent more than five hours in lines over the course of four days.  One exasperated wag suggested that only 10 people with general admission passes were allowed inside the Standard for each set.  I didn’t even attempt to gain admittance to the cozy club on Saturday or Sunday.  I made the best of the bad situation by making new friends as I cooled my heels.  The most telling indication that I was among fellow music obsessives was the absence of chatter inside the venues.

Knox in Box
I’m still thinking about a sidewalk placard advertising a three-bedroom, two-bathroom apartment in the heart of downtown for $1,750.00 a month.  I’m so smitten by Knoxville that I’d consider relocating to the college town.  Every local I encountered was kind and gracious.  My sole knock on Knoxville is that downtown is a food desert for committed fest-goers.  Who has time for a sit-down restaurant if it means missing a set?  Barring national chains from the district is a nice idea, but the lone convenience store is an unreliable mom-and-pop operation.  I would have killed for a 7-Eleven, let alone a Trader Joe’s.

(Original image of Craig Taborn by There Stands the Glass.)
Posted by Happy In Bag at 9:10 AM