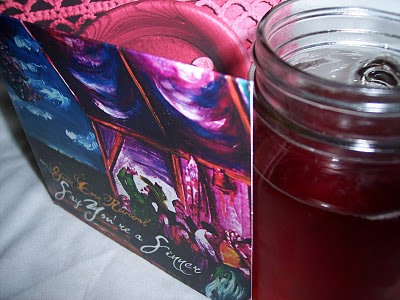 It doesn't seem that long ago when oldies radio stations played Patsy Cline, Sam Cooke, Roy Orbison, the Righteous Brothers and Jackie Wilson. Something tells me that members of Oklahoma's Green Corn Revival also miss hearing hits by those artists on terrestrial radio. The band's cinematic sound is steeped in Americana; their songs resonate with remarkable depth. The Western-tinged material on the excellently-titled Say You're a Sinner splits the difference between Marty Robbins and the Meat Puppets. Adding to the cool quotient- the band backed Wanda Jackson at this year's SXSW. Here's proof. I unreservedly recommend Green Corn Revival to fans of Calexico, Dead Rock West and X.

---
Like classic Psychedelic Furs? Check out the new video for Roman Numerals' "This Motion." (Tip via Blake Y.)

---
I wasn't old enough to drive and I can't remember how I ended up at this Peter Hammill concert in a church basement. I was never the same after that night.

---
It's not easy for me to admit, but I acknowledge that The Arcade Fire's new "video" is a game-changer.

---
Kansas City Click: My doppelganger is at The Record Bar on Wednesday.

Slash visits the VooDoo on Thursday.
Posted by Happy In Bag at 2:41 PM

I guess I best find a way to hear this here Green Corn Whatcamacallit right quick. If I love X then I must be looking at something pretty fine. And putting them in company with Marty Robbins seals the deal.

The Arcade Fire video via Google Chrome / HTML5 is not very interesting when your childhood home is now a freeway. However, the concept is amazing and I was suitably impressed when I used my current address.

Thanks for being my reader, BGO!