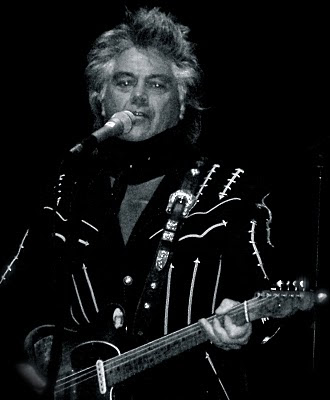 "Have you ever seen a crowd that needed a gospel song any worse than this bunch?" Marty Stuart asked his band Saturday. "Especially them boys over there." (Here's fan footage of the moment.)

I happened to be surrounded by "them boys." What a bunch of knuckleheads! The annual Roots Festival in Paola, Kansas, has a ten dollar cover charge but allows people to bring in as much alcohol as they can carry. Talk about your mixed blessings. It was easy to sidestep the scuffles that regularly broke out around me but the inappropriate bromance revelry during Stuart's gospel material was a major distraction.

Other than the boorish behavior of a few dozen people in the crowd of over 4,000, I loved everything about the night.

I hadn't seen Stuart and The Fabulous Superlatives- guitarist "Cousin" Kenny Vaughan, bassist "Apostle" Paul Martin and drummer "Handsome" Harry Stinson- since 2005. I'd almost forgotten that they might be the world's best honky tonk band. They cand do it all- gospel, rockabilly ("Luther Played the Boogie"), classic country ("Can the Circle Be Unbroken," "Ring of Fire" and "Long Black Veil"), bluegrass, a protest song ("Hard Working Man") and Stuart's own hits ("Tempted," "The Whiskey Ain't Working," "Burn Me Down", "This One's Gonna Hurt You," "Hillbilly Rock" and "Now That's Country.")

I loved it. So did Grace Potter & the Nocturnals. They were obviously awestruck as they watched Stuart from the side of the stage. I've already picked on Potter a couple times in 2010, but I have newfound respect for her. At the end of the day, she's just another music geek.

---
Here's Tim Finn's review of Alejandro Escovedo's show the same night. It sounds as if it was great, but I'm still glad I drove to Paola.

---
Kansas City Click: She & Him play the Uptown Theater on Monday.

Everette DeVan is at The Phoenix on Tuesday. 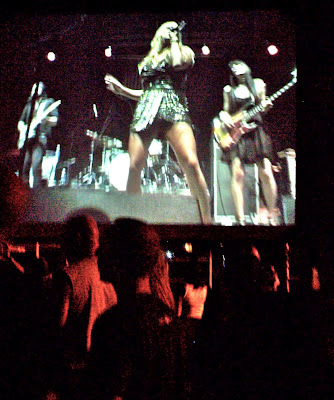 (Original images of Marty Stuart and Grace Potter by There Stands the Glass.)
Posted by Happy In Bag at 7:04 AM

Didn't see any Stevie Marriot in Grace's performance Saturday night. I missed the Crossroad's show but this time she tried to come across more sultry. Rocked harder at Crosstown Station last year and with Gov't Mule before that. Too much of the new cd and not enough of the older stuff. Expected more than 65-70 minutes too.
40wnks

That Gov't Mule show remains me favorite as well, 40wnks

Drummer Harry Stinson tours?! Jeez he must cost a fortune, but worth every penny. I remember he was part of the house band on one of those shows on the Nashville Network back when they were a country music channel. Great drummer, and a good bg singer too.

Thanks for the confirmation, Big Steve. Yeah, it seems like Stinson is on every other album out of Nashville.