Review: The Gang Font at The Record Bar 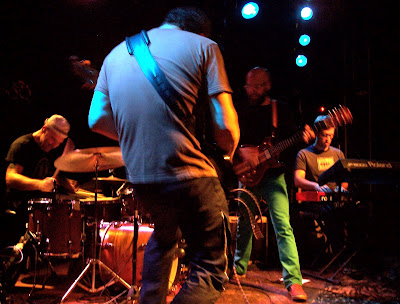 A knowledgeable friend calls Dave King "the best drummer of his generation." King's electrifying performance with The Bad Plus Saturday at the Folly Theater supported that assertion. Here's my review. The drummer's work the subsequent night at The Record Bar with The Gang Font was less convincing.

It was real room-clearing stuff. No more than forty people showed up Sunday but only about fifteen hardy fans were on hand to endure The Gang Font's final song.

I really liked it, but much of my pleasure was derived solely from my ongoing pursuit of discovering a successful fusion of jazz and punk. The Gang Font didn't quite get there Sunday, but its effort was nonetheless superior to anything I've heard from Saccharine Trust, Greg Ginn or the Bad Brains.

The Gang Font pursued noise from several angles. Elements of Tony Williams' jazz fusion, metal reminiscent of Dillinger Escape Plan, the jam tendencies of Primus and the prog of King Crimson were referenced. The most extreme sounds were the most rewarding. When they sounded like a traditional rock band they were stunning. And the occasional subdued moments were exquisite.

After all, only then could King be fully appreciated.

(Original image of The Gang Font by There Stands the Glass.)
Posted by Happy In Bag at 6:55 AM