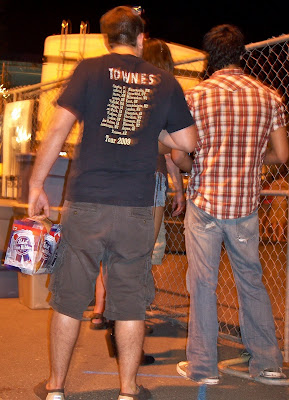 I had a very nice seven-course beer-pairing dinner with friends on Labor Day. We discussed current events, neighborhood gossip and our shared nostalgia for the Clinton era. I love my music geek colleagues, but I was relieved that I didn't need to defend my affection for Rick Ross or to explain what's sometimes described as my "jazz problem" on Monday.

The only time music came up was when my friends noted their eager anticipation for the forthcoming "Dukes of September" concert featuring Donald Fagen, Michael McDonald and Boz Scaggs. It took all my self-control not to chide them. Sure, I dig Pretzel Logic and Silk Degrees, but what about the hundreds of other music options this month? As a wise friend suggested on Facebook yesterday, "it's about comfort." Normal people don't obsess about live music.

And am I ever obsessing about my options Saturday! Here's a peak into my unhealthy thought process. In order of personal preference, here are my top dozen choices:

*Prairie Village Jazz Festival, free
I've seen every one of the featured artists in the last twelve months but I feel obligated to support this new event. And I can walk from home.

*Pavement- Uptown, $50
Although I own physical copies of half their catalog, I'm not a rabid fan. I only bothered to catch one of Stephen Malkmus' solo tours. And the price tag makes me question my loyalty even further.

*The Winard Harper Sextet- Blue Room, $15
An old-fashioned touring band in a good room is hard to pass up.

*Blue Oyster Cult/Fran Cosmo- Old Settlers Celebration, free
B.O.C. were still playing plenty of old jams like "Astronomy" when I caught them a couple years ago.

*Mixed Method- Jardine's $5
It's my last chance to hear this electronica/prog/jazz act in 2010. And I think these guys are mad at me because I've never seen them.

*Larry Gatlin/Crystal Gayle- Yardley Hall, $48-$125
The price of a ticket is enough to make my brown eyes blue.

*Ronnie Baker Brooks/Grady Champion- Knuckleheads, $15
A solid double bill at one of my favorite venues.

One variable I don't have to worry about is alcohol. After overindulging Monday, I might not have another drink until October. And while Saturday has more compelling choices than usual, I go through this same exercise most every night I'm not working. Here's hoping my straight friends never find out what's really going on in head.

---
I wish every new album had a promotional video to back it up. Here's the advertisement for the forthcoming Lazerbeak release.

---
Krizz Kaliko is a borderline genius, but after watching the video for his new single "Elevator" I think I'd rather take the stairs.

I think I'll just stay home on Saturday. There's nothing going on.

A lot of hoopla is being made of Max Weinberg's big band engagement at Jardine's on Halloween. Well, it's nothing new. Kerry Strayer, for instance, leads an 18-piece ensemble at the small jazz club on Sunday.

(Original image by There Stands the Glass.)
Posted by Happy In Bag at 7:12 AM

I'm tempted to head to SoJoCo just to hear 'O No, There Goes Tokyo', one of the all time great lines in R&R. What's better? You quote me some Dylan and you're target practice.

"Up all night with Freddie King/I've got to tell you, poker's his thing." Or most any line from that song.

Well, now Bill, iffen you know Freddie, then it's 'poke her his thing'.