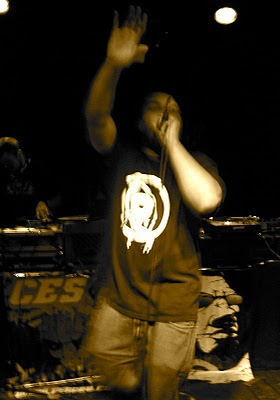 Most of Kansas City's cool kids were at Crossroads Music Fest at midnight last Saturday. That meant there was plenty of elbow room at The Record Bar. I didn't mind one bit. Beautiful women were weirdly over-represented in the crowd of about one hundred. I was hit on several times in spite of my weight and hair issues. Nice!

What about the music, you ask? Oh, right... I enjoyed Dallas, even though my pal accused him of simply copying Brother Ali. Besides, he plays harmonica. Ces Cru is always great. Something's wrong with those guys- and I like that about them.

Steddy P receives plenty of coverage at There Stands the Glass. You'll note that Style Like Mind has a spot on my top 2009 album list in the column to the right. The highlight of Saturday's set occurred when Steddy P was joined by Reach and Approach during "Format." The trio are underground hip hop royalty in KC. It was a really nice moment on a really nice night.

And I was sorry to disappoint you, ladies. I'm not on the market.


---
I reviewed Friday's performance by The Kansas City Jazz Orchestra.

---
The Prairie Village Jazz Festival was a hit. Here's my recap.

---
Here's the promotional video for the Barclay Martin Ensemble's September 24 concert at The Folly Theater.

---
The Soft Reeds are one of my favorite locally-based rock bands. Here's their new video.

---
Sonny and Ornette together! (Tip via Steve Paul.)

On Thursday, the thirtieth anniversary of the death of Bill Evans, Michael Pagan pays tribute to the pianist at Cafe Trio.

(Original image of Steddy P by There Stands the Glass.)
Posted by Happy In Bag at 8:06 AM