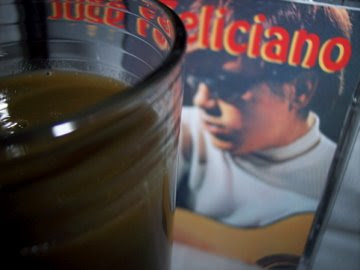 Juanes may have cleaned up at last night's Latin Grammy Awards, but it also seemed that Jose Feliciano was everywhere. Univision made him the star of their red carpet coverage. He was visible when the cameras panned the audience. He was featured on the tribute to Gloria Estefan. And he even won the Best Contemporary Tropical Album award.

I had no idea that the 63-year-old remains so relevant. Young readers may be startled to hear that Feliciano's version of "Light My Fire" was probably more popular than the Doors' original. And do any of you remember his theme to Chico and the Man? Oh, (bad) memories.

Feliciano also recorded a soulful version of this Gram Parsons classic. It's contained on an insanely great collection. As good as it is, it makes me long for an Elvis Presley treatment.

---
My favorite performance last night was by the wonderful Julieta Venegas. Banda El Recodo blew my mind. Just look at the size of that band! It's also going to take a lot of tequila to erase the memory of Karyme Lozano snogging Kenny G's soprano sax.

---
I also watched the CMA Awards Wednesday night. How tedious was it? I thought the three best performances were by Kid Rock, the Eagles and Kenny Chesney.

---
Kansas City Click: The Gaslight Anthem, the subject of the previous There Stands the Glass post, open the show tonight at the Uptown Theater.

Kelley Hunt has a Kansas City-themed show Saturday at the Blue Room.

The Get Up Kids reunite for a Sunday show at the Record Bar.
Posted by Happy In Bag at 12:08 PM

Have you heard Jose's version of our national anthem.

He received death threats for it.

And rightwingers were livid.

And yes it is one soulful performance. History making if you ask me.

Rock paper scissors for an hour and a half with Julieta?

Last month NPR's Only a Game aired a story about Feliciano's performance of the national anthem in 1968(!). Here's a link. Marvin Gaye sang the anthem earlier in the Series and the organizers did ask him to avoid making political statements (and he agreed). It didn't occur to them to say anything like that to Feliciano, nor did they think his performance had offended anybody till the next day.

I'm not going there, BD. Suffice it to say, I adore her.

Lee, you're an accordion guy. Don't miss that all-star cast of accordionists sitting in with Julieta. And thanks for the link.

Ai-yi-yi! For a second I thought Julieta had ?uestlove on drums! And was that one of the guys from the Hooters (remember them?) playing a hooter?

Hey, BD- Lee's latest comment compelled me to watch the video again. I almost wet myself laughing at your rock-paper-scissor joke.

That's not ?uestlove, Lee. That's me after I go three months without a haircut.