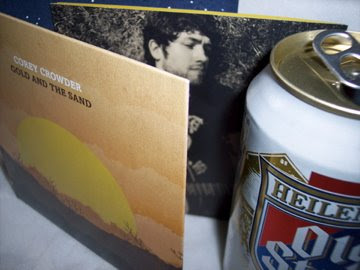 The affair has ended.

That's Corey Crowder. He's staked out some valuable property on the musical landscape somewhere to the south of Dierks Bentley and just a little to the west of the Allman Brothers. He'd be an appropriate opening act for both Kid Rock and Tim McGraw.

I could use a little more punk-styled grit on his new Tooth & Nail release Gold and the Sand, but Crowder's tendency to keep James Taylor's melodic monolith in sight will probably serve him well.

---
Stop the presses! There's a late contender for 2008's song of the year. It's Wiley's "Cash In My Pocket". The accompanying video is also great.

---
This video moves me, and I'm not even a big Coldplay fan. (Found via a Twitter pal.)

---
I finally got around to watching an episode of Celebrity Rehab. A Google search confirmed my immediate hunch- one of the counselors is Bob Forrest of Thelonious Monster!

Soulfly top the bill Sunday at the Beaumont.
Posted by Happy In Bag at 8:41 AM

How bout that Bob Forrest. I liked his seersucker suits and his magenta tinted hair.

It's difficult for kids to imagine now, Jon, but you'll recall that there was a moment when Thelonious Monster had a chance to snatch the brass ring from the Red Hot Chili Peppers.