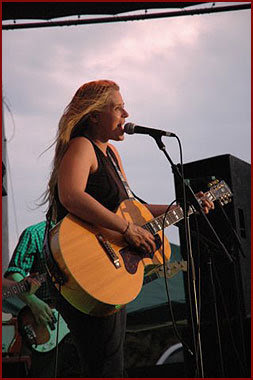 Start making your plans for the weekend. Two of the best parties in Kansas City will be benefits in support of Abigail Henderson. The full schedule is here.

Friends and fans of the songwriter and vocalist, best known as a member of The Gaslights, are assisting Henderson with medical bills incurred by a bout with inflammatory breast cancer. Details are at Apocalypse Meow. I also recommend Hope Is My Middle Name, Henderson's deeply affecting blog.

Ten acts are participating Saturday at Davey's Uptown. Highlights include a reunion of local favorites Parlay and Sandoval. It's also likely the only time that the off-color sleaze of Bacon Shoe and the sincere folk of Kasey Rausch will share the same bill.

The nine acts Sunday at the Record Bar may be even more impressive. They include a Sister Mary Rotten Crotch reunion, the Pedal Jets, Kristie Stremel and Pendergast.

There Stands the Glass favorite Howard Iceberg is performing at Davey's Saturday. He'll also be selling November Nights, his first CD in five years. The package includes a DVD containing footage of Henderson performing with Iceberg and the Titanics. All proceeds from the sale of November Nights will go directly to Henderson.

EDIT: The Titan Records listening party at the Record Bar Saturday afternoon is also part of the Henderson benefit. Read more about the new reissue Titan: It's All Pop! at Back To Rockville.

---
There Stands the Glass trainspotters: While composing this post, I discovered that this is the third time I've featured Iceberg. Ike Turner is the only other artist I've highlighted more than once in about 700 posts.

---
Yma Sumac died Saturday. Man, I hadn't even realized that she was still with us. (Tip via BGO.)

---
Kansas City Click: Hat Triq will almost certainly be pedestrian when they perform at Foo's this afternoon. But I love the idea of pre-teens playing Green Day and Ramones covers.

(Photo of Henderson lifted from Facebook.)
Posted by Happy In Bag at 8:57 AM