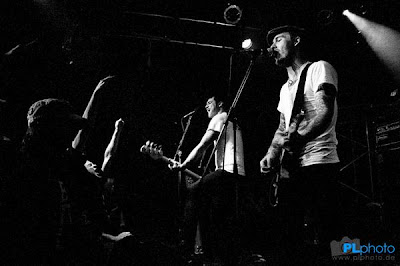 On to the next town.

Perhaps it was Chuck Berry who first successfully combined these disparate elements in a rock'n'roll song. He's been followed by the likes of Creedence Clearwater Revival, Bruce Springsteen, Social Distortion and the Hold Steady. Add the Gaslight Anthem to that distinctive list.

I'm just one of thousands who have fallen hard for the band this year. I was actually disappointed when I first heard "The '59 Sound" on commercial radio. I selfishly wanted the band to myself for a while; I'm angry that I hadn't discovered them a year or two ago. The New Jersey-based quartet is clearly the breakout rock act of 2008.

How could I resist "Miles Davis & the Cool"? In addition to the explicit reference of the title, the song alludes to Otis Redding, Bob Dylan and Elvis Costello. The '59 Sound is loaded with similarly memorable anthems.

The Gaslight Anthem's world tour takes them to Denver tonight. I hope to catch them at Kansas City's Uptown Theater on Friday. They'll also be featured on tomorrow's Fuse's "On Tour" broadcast at 6:30 p.m. EST.

---
Mitch Mitchell died this week. I was shocked to learn that he was only 62; Mitchell was just a baby while drumming for Jimi Hendrix. This essay is disrespectful but highly entertaining. The author references this remarkable video footage. It's probably how Mitchell would like to be remembered.

(Image from the Gaslight Anthem's MySpace.)
Posted by Happy In Bag at 6:33 AM

i hope these guys can carry the torch that seems to have been pushed their direction.

I absolutely love this song... I listen to it repeadetly throughout my days.. makes me want to get in my old rusty car and drive through New Jersey like Bruce Springstein.. Good blog.. I'm going to follow !

Thanks for checking in Sara. I'm very pleased by The Gaslight Anthem's rapid ascension over the last year. They're headlining a show here in a couple months in a room that holds 1,000.