The Gaslight Anthem at the Uptown Theater 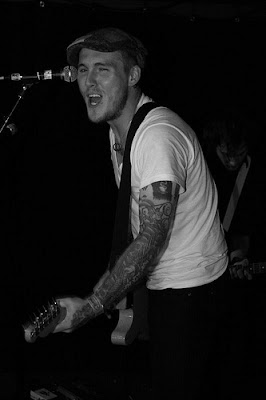 It was more like Opposite Day. The four bands on the tour- the Gaslight Anthem, Thrice, Alkaline Trio and Rise Against- were billed in reverse order of my personal preference.

Serving as the sacrificial opening act, the Gaslight Anthem were the most compelling band of the night. A thirty-minute opening slot at a punk show isn't the ideal forum to make a case for being the future of rock'n'roll. While the Gaslight Anthem didn't send shivers down my spine, they also did nothing to dissuade my faith in their potential.

Significantly, they weren't manic, sloppy and self-destructive like comparable true believers the Hold Steady or the Replacements. The Gaslight Anthem tried their best. Welcome to the new sincerity.

The emotional dynamics of "We Came To Dance" recalled fellow New Jersey resident Bruce Springsteen. (It was sort of like this.) "Angry Johnny and the Radio" sounded a lot like "Breakdown"-era Tom Petty & the Heartbreakers. (It felt something like this.)

Only time will tell if Fallon can achieve Springsteen-esque success. He may instead become a cult favorite like Joe Grushecky or Garland Jeffreys. Either way, I intend to be listening attentively. (The band returns to Kansas City December 10 for a radio station event at the Midland Theater.)

Thrice was second. Their brawny post-punk floored me. I had no idea that the Californians had progressed into an incredibly interesting band. Imagine Tool without the arena-rock impulses. A faithful cover of "Helter Skelter" seemed only natural.

Alkaline Trio provide the answer to an awkward question: What would have become of Green Day if Billie Joe Armstrong had never been struck with inspiration? The near-capacity crowd of about 1,400, however, didn't share my cynicism. Many sang along with every punk anthem. The Gaslight Anthem's Fallon joined them for a set-ending Misfits cover.

Blame it on election fatigue. I just wasn't in the mood for the strident political protest punk of Rise Against. I found watching the sea of people on the floor more entertaining than listening to the headliners. I left early.

After all, it was Opposite Day.

(Image of Brian Fallon taken from Rise of Beachmont's Flickr account.)
Posted by Happy In Bag at 8:27 AM

actually rise against has put on one of the most compelling live shows ive seen. ive gone back and seen em multiple times - possibly the most out of any band ive seen live. but opinions and assholes, eh?

You have a great music blog here! I've added you to my mp3blog list and custom search, check it out.

Rickdog's collected 6,000 mp3blog links, accessible from the alpha menu at page top. You can open frames on these blogs to view them directly on my site, and you can also view the feeds in a frame.

You can search your blog and all the others in my custom google search:

I add new blogs to the alpha lists once a week, but your site is immediately added to the custom google search engine.

There's not a thing wrong with Rise Against, DNA. They're clearly in peak form. I just wasn't up for it Friday night.

I was excited to see the Gaslight Anthem, and was horribly disatisfied...not with the band, but with the atrocious sound. I spoke with the roadie for them and he said they didn't have a sound guy on tour, which was blatantly obvious. Hopefully when they play again, it will sound better. I actually went for Alkaline Trio and was pretty disappointed with them as well. Their set was short, and the list sucked. Thrice is just kind of meh, and Rise Against was ok. I was pretty drunk by the time they went on to even care anymroe.

The Gaslight Anthem recently gave an acoustic performance at WFNX on The Sandbox. They did '59 Sound as well as High Lonesome. Here are the links to watch the videos, they're fantastic!!