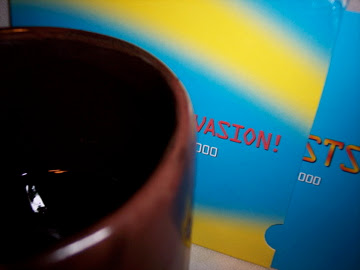 Five months have passed since the accidental death of Esbjorn Svensson. It's become increasingly apparent that the loss is one of the most significant of 2008. The European musician was 44. The Swede might have had decades of innovative, groundbreaking ahead.

I'll confess that I've resisted acknowledging the fact that much of the most interesting jazz of the last decade has come from Europe. Perhaps it's because musicians there are not confronted daily with the American politics of jazz. Europeans are freer.

Svensson infused jazz with elements of rock, new age, classical and electronica without cheapening the music. That's a rare feat. This track from an out-of-print 2001 release is a fine example. This stylized video is also instructive.

I'm a strong advocate of forward-thinking jazz acts like the Bad Plus. While Svensson was certainly part of that generational surge, he was also doing something that felt deeper and even more promising.

---
I must have a minimum of five hours of sleep in order to function as a human being. The outstanding Atmosphere show I attended Thursday night/Friday morning wiped me out. Here's my zombie-esque review.

---
Ray Ellis, arranger for the likes of the Four Lads, Bobby Darin and Doris Day, died October 24. (Tip via BGO.)

Welcome To The Future!