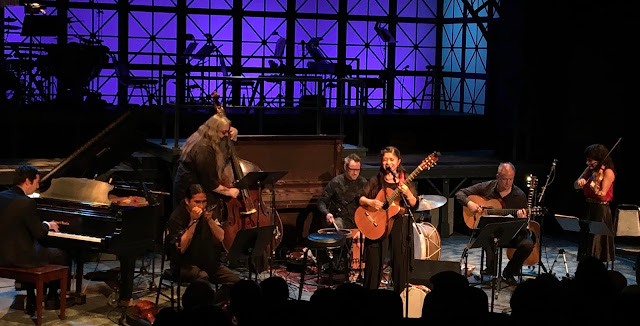 Nadia Larcher called Beau Bledsoe a dreamer during her North American debut at MTH Theater on Monday, October 14.  After taking in her astonishing performance, I now think of the leader of Ensemble Ibérica as an expert talent scout.

Bledsoe told an audience of less than 100 that he stumbled upon Larcher in an out-of-the-way theater in Buenos Aires by happenstance last year.  Even though the Argentinian was showcased in a 75-minute symphonic concert in 2017, Larcher is still so obscure that the video of the exquisite performance in Buenos Aires has less than 2,500 views.

The $34 I paid for my ticket covered only a pitiful fraction of what was almost certainly a huge investment to get Larcher to Kansas City, but her show was an artistic windfall.  Accompanied by guitarist Bledsoe, violinist (and translator) Christine Brebes, multi-instrumentalist Amado Espinoza, pianist Brad Cox, bassist Jeff Harshbarger and percussionist Brandon Draper, Larcher demonstrated that her tiny frame houses a massive voice and an even bigger personality.

A few of Larcher’s songs were about cowboys and the travails of agrarian life in Argentina.  That’s misleading.  Larcher is clearly professionally trained.  Her approach is no less refined than the sophisticated sensibility of the Broadway star Kelli O’Hara.  I can’t speak for Bledsoe, but the magnificence of Larcher made my dreams come true on Monday.


---
I contribute weekly concert previews to The Kansas City Star.

(Original image by There Stands the Glass.)
Posted by Happy In Bag at 12:54 PM