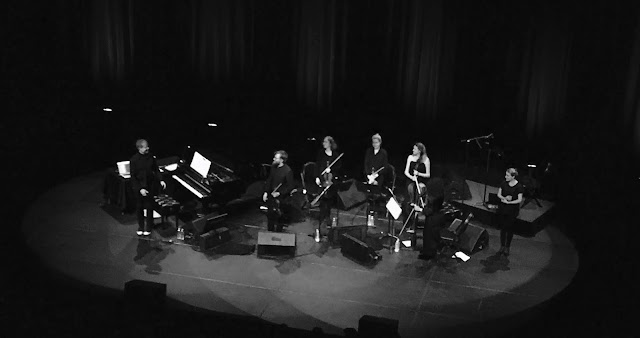 I delivered an unsolicited screed to the stoned stranger seated next to me at Austin City Limits Live at The Moody Theater on Friday, October 18.  My tirade prior to a concert by Max Richter, Grace Davidson and the American Contemporary Music Ensemble was instigated by an odd handout given to members of the audience of about 1,000.

Damon Lindelof, the co-creator of the HBO series The Leftovers, praised Richter’s “incredible music” and its frequent use in television and film productions on the leaflet that enraged me.  The hapless stranger graciously endured my harangue about how Richter’s music will prove far more enduring than the ephemeral creations of Hollywood.  While Richter is best known for his contributions to productions including Arrival, Black Mirror and the current Brad Pitt vehicle Ad Astra, much of his work is on the commanding level of composers such as Philip Glass, Steve Reich and Jóhann Jóhannsson.

I felt vindicated by Richter’s refusal to “enhance” his presentation with video projections.  The concert opened with a reading of his score for The Leftovers.  The music soared without the aid of Lindelof’s images.  Unfortunately, the spell was regularly disrupted by dozens of barbarians who applauded between movements and heedlessly let doors slam during their trips to the bar.

The second half of the concert consisted of a 90-minute version of the eight-hour song cycle Sleep, a project Richter introduced as “a protest album.”  Rather than inducing drowsiness, Sleep’s insistent minimalism arouses a fevered sense of agitation in this listener.  Davidson’s repeated “ooh-ah” refrain and the unrelenting cello bows became increasingly jarring as the piece progressed.  The ensemble occasionally broke off, allowing Richter to toy with decaying sound loops on his laptops like an ambient dub DJ.  As with many of the most exciting experiments, the performance challenged assumptions about the nature of music and how it’s meant to be consumed.


---
I reviewed Shoulder to Shoulder: Centennial Tribute to Women’s Suffrage by the Karrin Allyson Sextet at Plastic Sax.)

(Original image by Plastic Sax.)
Posted by Happy In Bag at 11:29 AM